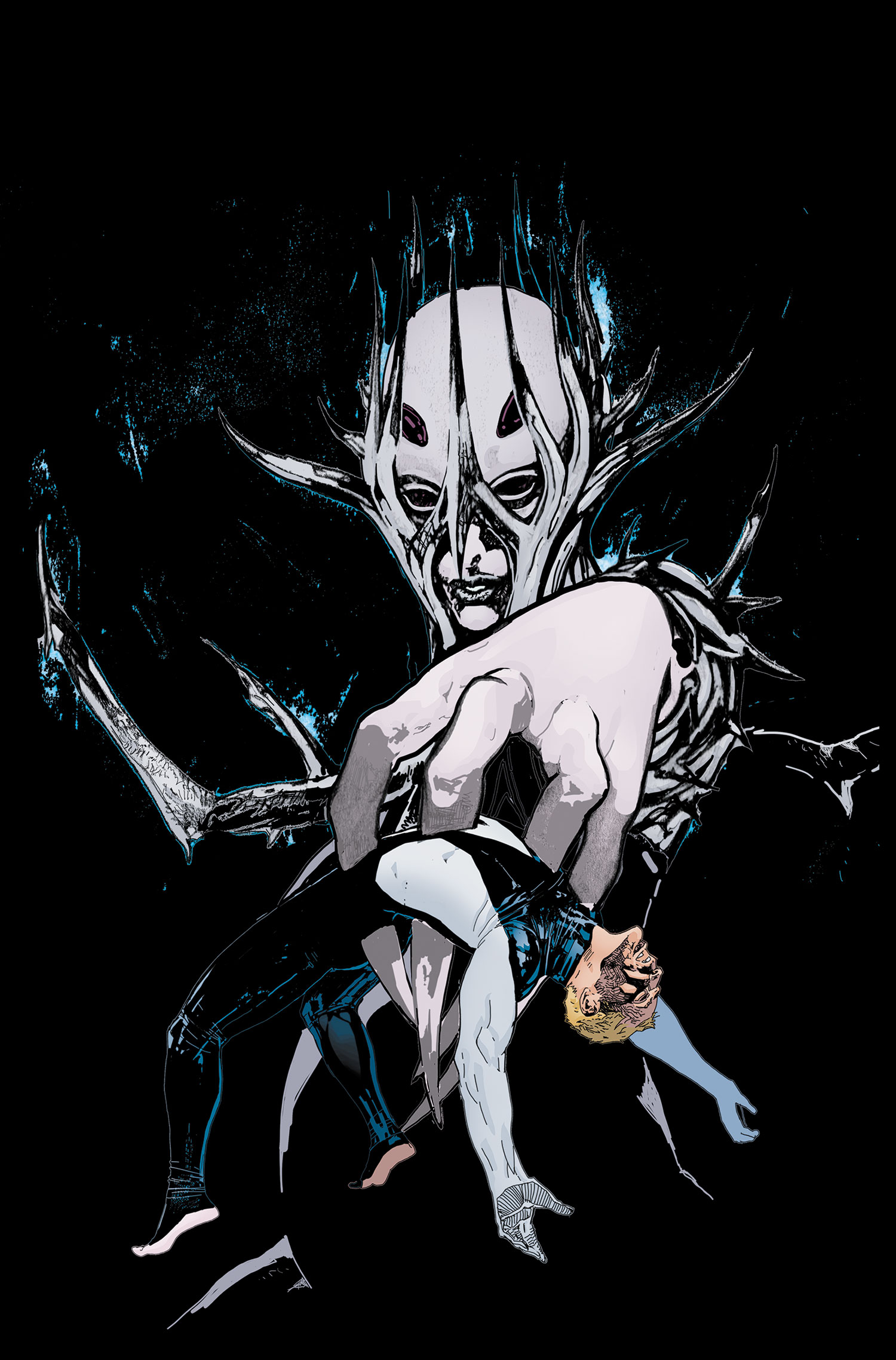 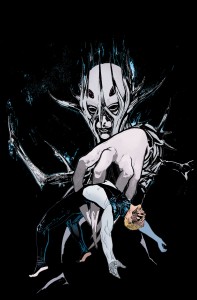 Buddy Baker, our tried and true Animal Man, has been dealt a devastating blow with the death of his son Cliff, post-“Rot World.” While we’ve seen how Maxine has been dealing with her grief in the monthly book, this week’s Annual gives us a dramatic look at the lengths one man will go to grasp at the memory of his son — bringing Buddy into contact anew with the Spider Queen, Anansa!

Lemire does the unexpected here and creates a main antagonist that not only isn’t a villain per se, but also serves as a curious parallel to Buddy’s own development from nurturing parent to grief-stricken recluse. While weirdly alien and initially believed to be threatening, Anansa is just the latest addition to Lemire’s evolving mythology for Buddy that upends traditional super-hero conflict and status quo concerns.

Try as he might to don the long-johns and preserve his perfect Midwestern nuclear family, Buddy will never be the picture perfect hero for whom battles are simple and colorful, and for whom the status quo returns after every six issue encounter. If anything, Lemire seems to be establishing with Animal Man the illusion of civility in the face of hard facts of life — humanity is as subject to the natural aggression, fear and inadvertent cruelty as the animal kingdom is. Bringing in a Spider Queen who upends what it means to be a threat is nothing if not affirming of this hard reality. And Buddy’s own grief, like any parent’s, at the death of his son, is the place where that civility and rationality would begin to slip. The question is, what will ultimately win out for the Animal Man — madness or a return to civilized thought? This issue certainly doesn’t close the book on that question, thankfully.

The true gift of this issue, however, is the return of Travel Foreman to art duties after leaving the book last year. Foreman’s rough style and near-psychedelic renderings illustrate the devolution of Buddy’s human experience so perfectly, with madness seeming to creep into every page of the modern day story. His depiction of the animal powers Buddy calls up is so elegantly perfect in their hallucinogenic qualities, and the layouts he prepares for Anansa’s in-mind appearances are just so uniquely creepy. There’s no question Foreman is a master at the horror comic, but what’s so surprising in this issue is the degree to which he gets the look and feel of Animal Man as a classic hero as well. In both the flashback sequences, and the heartbreaking double-page spread toward the end of the tale, Foreman crafts Buddy’s look and stature so perfectly, you’d almost think he could be the next Justice Leaguer or Avenger. Almost.

And as a side note, it’s astounding to me how excited I get whenever Animal Man appears in his super-hero costume, redesigned in issue #1 by Foreman as well. Who knew that seemingly silly blue and white get-up would become so endearing and impressive in my mind two years later? More of that, I think, is in order.

A perfectly wonderful interlude to a sadly troubling time in the life of Buddy Baker, Animal Man Annual #2 mirrors the best of what this title has done to date — upend expectations and really encapsulate what it means to be human. We are no more immune to the disaster nature can bring than the animal kingdom is, but we certainly can delight in the beauty of its design amid the chaos. This issue illustrates that bittersweet dichotomy in spades.