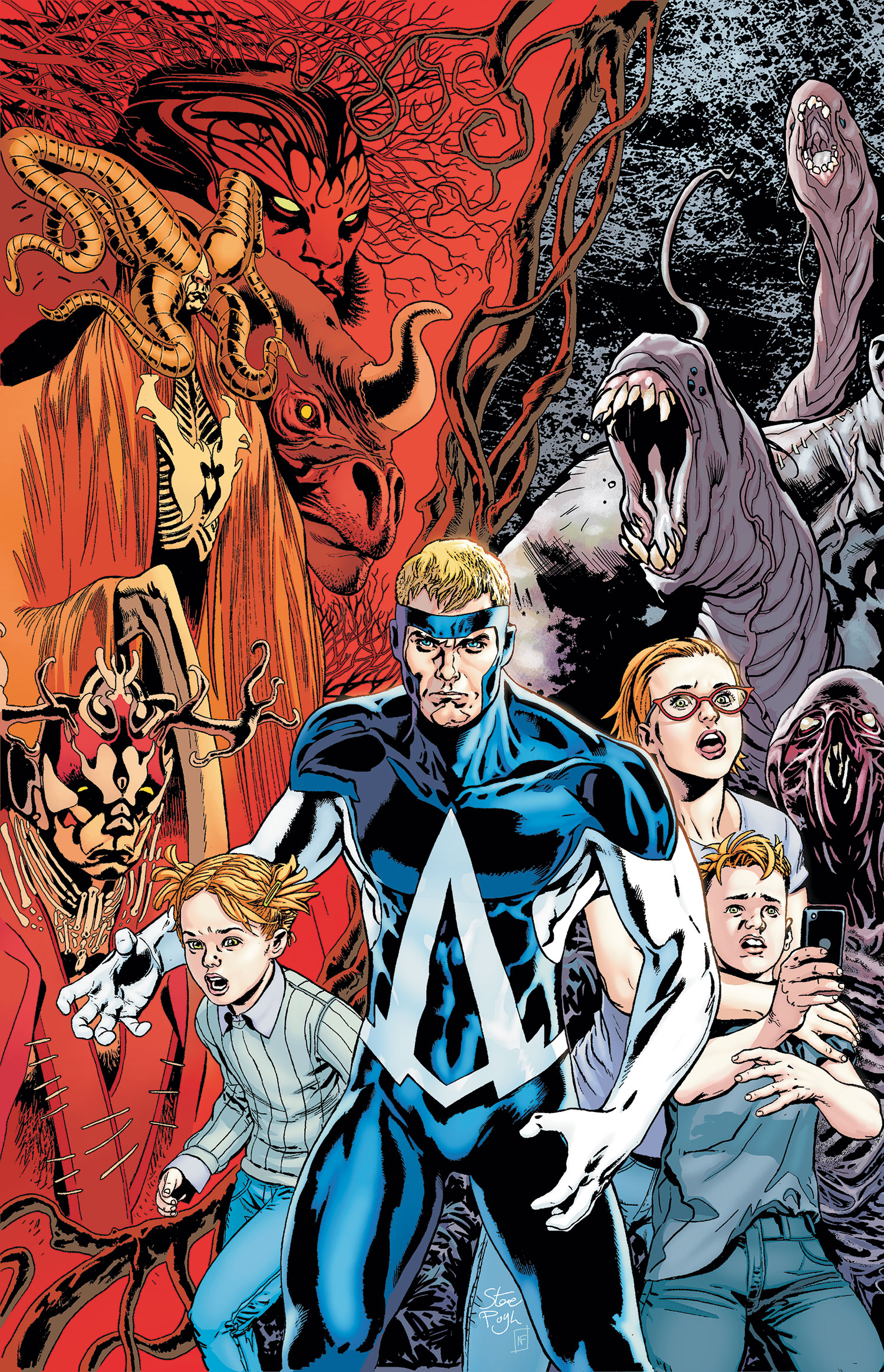 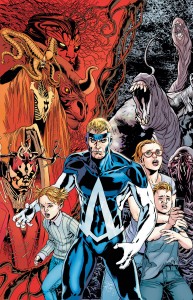 The forces of the Rot have overtaken the earth, and its up to the chief defenders of the Earth’s lifeforce — Buddy Baker, the Red’s Animal Man, and Alec Holland, the Green’s Swamp Thing — to stop it. But what happens when they are defeated? Witness Buddy’s adventure through the future of a ravaged earth now known as Rotworld, as he and other surviving heroes join forces to reach the only being capable of undoing this terrible fate — Buddy’s own daughter Maxine, the powerful avatar of the Red.

[Volume 3 of this title contains not just Animal Man #12-19, the complete story of The Red Kingdom, but also Swamp Thing #12 and #17, bookend titles that link Animal Man to its companion book Swamp Thing Volume 3: Rotworld – The Green Kingdom.]

For a book that could so easily fall into event-itis with overarching plotlines dominating over character concerns, Animal Man Volume 3 defies all logic and delivers a singular story about a man with one mission in mind: saving his family. Buddy Baker is not your standard super-hero template, a do-gooder out to save the world in brightly colored spandex and grandiose self-image. Jeff Lemire has built upon Buddy’s offbeat hero history by really narrowing in on what separates the Animal Man from all the other men in tights of the DC Universe. He is a family man, not even first and foremost, but almost exclusively so. As chief protector of the Earth’s avatar of the Red, his own daughter, sure Buddy is performing a critical task for the good of mankind. But at his root, Buddy is doing it because his wife and children (Maxine and poor, poor Cliff) are everything to him, far more important than the film career he’s continued to manage to pay the bills, or any likelihood of Justice League membership. 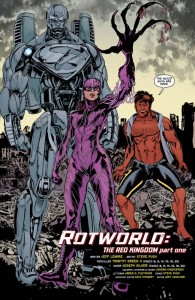 In maintaining this crystal clear focus for Buddy’s personality and motivations, Lemire is able to craft a compelling story that’s long on action and chock full of other characters, without ever losing the core of his narrative. Buddy remains at the center of every wild, dramatic scene, and the reader always knows where his thoughts and emotions are leading. And yet, we are still treated to a slew of other fascinating guest stars, many of whom have not had this much spotlight (or any, for that matter) in the New 52 to date. Black Orchid shines as a strong-willed classic heroine with connection to both the Red and the Green. Frankenstein steals nearly every scene he’s in (per usual), and we get a fantastic reintroduction to one of the most visually compelling Green Lanterns of all-time: Medphyll, the plant-based guardian of the emerald light. Steel and Beast Boy also round out well-developed portrayals that have been largely missing in their appearances the last two years.

Part of the thing, too, that makes all of these heroes so dramatic in these pages is their precise and gorgeous rendering by artist Steve Pugh. Long associated with Animal Man’s adventures, going back to the 1990s, Pugh balances the ability to render beautiful faces and realistic, yet super-heroic bodies with an astounding talent for devising the truly grossest villain designs I have seen in a comic since the days of pre-code horror titles. The devastation into which Maxine turns as an agent of the Rot and the ever-growing army of zombified heroes and villains wraps around your mind like a sickness itself, and makes the presentation of this decaying world feel like it could easily seep off the pages. 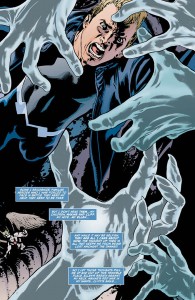 Unfortunately, none of the other artists contained within the volume can match Pugh’s dark genius, and at least one chapter [from the companion title Swamp Thing] by Andrew Bellanger seems to undo a lot of what Pugh accomplishes by moving the storyline into an almost cartoony/all ages style of drawing. Bellanger’s work isn’t bad, but it seems desperately misplaced. Nevertheless, the volume wraps up with two additional chapters by Pugh, reinforcing the book’s overarching style and refocusing the volume right where it belongs: back onto the emotional crisis Buddy and his family are experiencing. How Steve Pugh manages to illustrate that scenario with as much elegance as he can the forces of the Rot with such disgusting details, I’ll never know. I’m just sincerely glad he can.

Aside from the beauty of the storytelling and its dramatic graphic rendering, what Animal Man Volume 3 does right is collect a story that reads exceptionally well in collection — better, as it turns out, than it did in monthly installments — and doesn’t wear the reader down with anything unnecessary to the tale. The pace is brisk throughout and what we are left with is a perfectly constructed vision of a man in desperate times, only trying to get back the one thing that means anything to him: his family. As far as storytelling goes, you can’t get much more relatable and compelling than that.