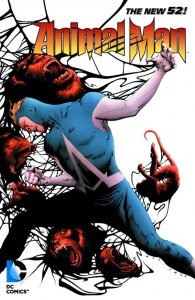 In the aftermath of his son’s tragic death at the end of Rotworld, Buddy Baker is left in shambles. Being Animal Man has cost him his family, with his wife and daughter now separated from him. So, this would be the perfect time for his acting career to take off! Nominated for an Oscar, Buddy may not be interested in the limelight, but he probably isn’t going to have a choice. Meanwhile, Maxine strikes a deal with the lords of the Red to get her dead brother back, with fantastic results.

Splinter Species is volume four of what we now know will be a five volume story by series writer Jeff Lemire, and as a result, it may not have the punch of the last volume, or the next for that matter. The death of Cliff Baker at the end of volume 3 is most certainly an Act II cliffhanger, and with the completion of Lemire’s vision yet to come, a lot of what transpires in this edition is just strong character work and an author moving some pieces across the board. We see the rise of Brother Blood, chief antagonist and competitor for the helm of the Red in recent months, as well as Maxine’s growing acceptance of her powers, with able assistance from adorable little Socks the Cat. But none of these plot movements compares to the work Lemire does to express Buddy’s grief at the loss of his son. 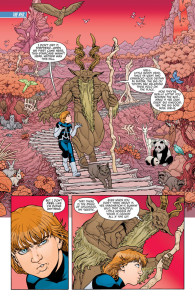 Opening the volume with the exceptional Annual #2 of last year, the writer takes Animal Man through the worst of what is unquestionably the most devastating thing that could happen to a parent, and compounds it with media attention, pop culture disrespect, and a huge emotional wall between himself and the remainder of his family. That Buddy seeks out even the smallest token of his life with Cliff — coinciding with an entertaining flashback to some of his earliest days as a straight-up super-hero — and in such a heartbreaking way, underlines how much this book is simply a story about the power and devastation of fatherhood, wrapped in a horror comic, pretending to be a super-hero title. It’s a beautiful, if not difficult, narrative, and makes Buddy’s return to a case as small as that of missing cats a moving and fitting jump back into life. Despite that, his tears feel real, and in contrast to Maxine’s almost storybook assumptions about resurrection and the inevitability of Cliff’s return, they burn even more as they fall.

The tag team art by Steve Pugh (on Buddy’s sequences) and Francis Portela (on Maxine’s travels) is probably the best split art scenario I’ve seen from any Big Two book in the last three years. It makes sense given the context, and despite their vast differences — or perhaps because of it — both artists give us some of their best pages ever. Pugh’s creepy rough delivery on Animal Man’s return to the field makes him one of the most unique looking heroes on the market today, and well outshines the more standard Marvel-style he seems to be employing in All-New Invaders. 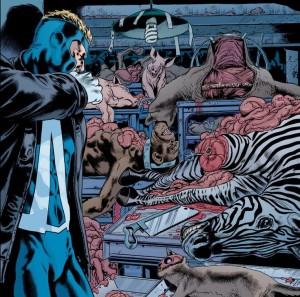 The level of detail Pugh has put into the perpetrators of the stolen animals, and the results of their mad, arcane experiments, is truly exceptional, and may require reading on an empty stomach. Nevertheless, every page Pugh presents is a tightly rendered nightmare. On the flipside of that coin is Portela’s rendering of Maxine’s trip into the Red, and her re-imagining of the landscape as she strides across it. Like a Candyland made entirely of organs, muscle, and bone, the Red has transformed into a fantasy world under Portela’s pencils, and you can literally see the influence of a little girl in its construction.

A volume without many big moments, but a whole slew of tiny heart-wrenching ones, Animal Man Volume 4 continues the story of Buddy’s reclamation of his family and control of the Red with the same careful consideration of its narrative atmosphere that its creators have become known for. With the final issue of Lemire’s Animal Man run arriving in mere weeks, there’s no better time to catch up — and feel all its deepest, darkest feelings — than now.