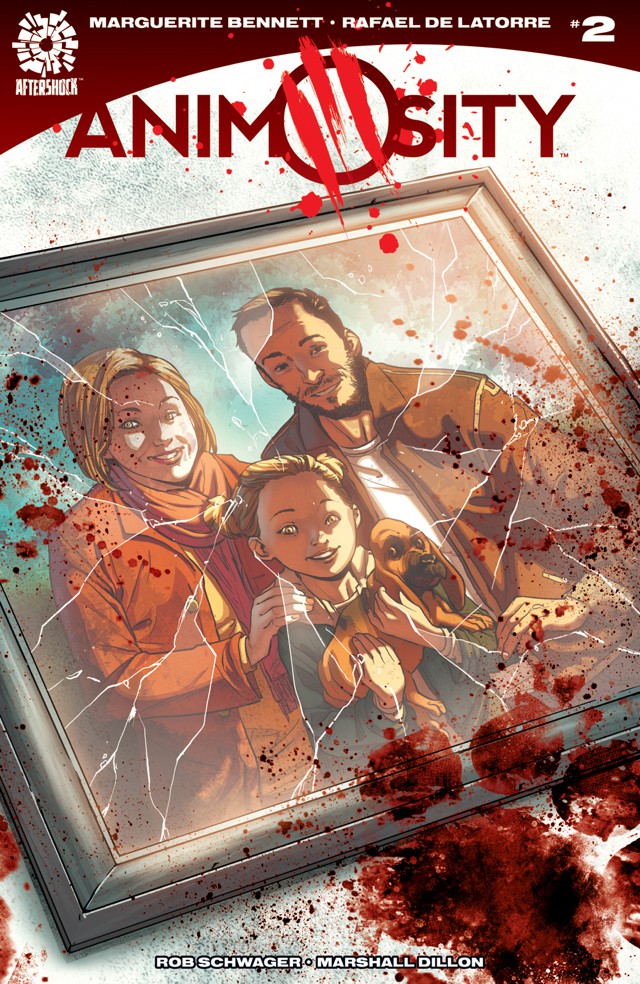 “Total government quarantine, but the birds say this is happening all over the world”. What are you doing with your life if you’re not reading Animosity? Seriously, what?

Bennett delivers yet another compelling and tension filled issue of this new comic series. The western talking bloodhound Sandor has completely captured my heart. The way she thinks through the situation feels realistic to this great what if scenario. The free trade market, the animal-human negotiations, the extremists on both sides—it’s all well set up. I also love the references to Animal Farm and Planet of the Apes because who could resist the opportunity? There are a few events that happen in the issue that I knew were going to happen, but that didn’t necessarily take away from those scenes, and the writing for this comic overall is smart and well done.

De Latorre has done a beautiful job. There’s a wide variety of animals and I love that the species shown are not all just the run of the mill animals you’d find in a city. There are cows, meese (okay, fine, MOOSE), and even a few alligators. Certain scenes would not be as powerful if not for his work and combined efforts with colorist Rob Schwager. A certain explosive scene as well as a very graphic attack on a much beloved dog would not feel as gripping without the images created by the two of them.

My favorite scene within the issue is the animal-human negotiations. The leaders of the animal side of the negotiations may be a surprise to some, though, if you’ve been reading a certain all-ages comic that has them as a major part of it, you wouldn’t be too surprised that this particular animal is leading the revolution. What these two animals are riding is a great choice as well and not something you’d expect running around in Time Square. The tension filled talks between a senator and these animals is filled with a lot of understandable problems that would come out of this scenario and the types of drastic solutions those problems may need. The talks, as well as the rioting that breaks out, are sublime in its terror and spiraling chaos. It’s probably the most intense scene in the issue.

Like I said before, what are you doing with your life if you’re not reading Animosity? It is a fantastically written and drawn what if scenario that has the realism of Walking Dead but with talking animals. Read it.