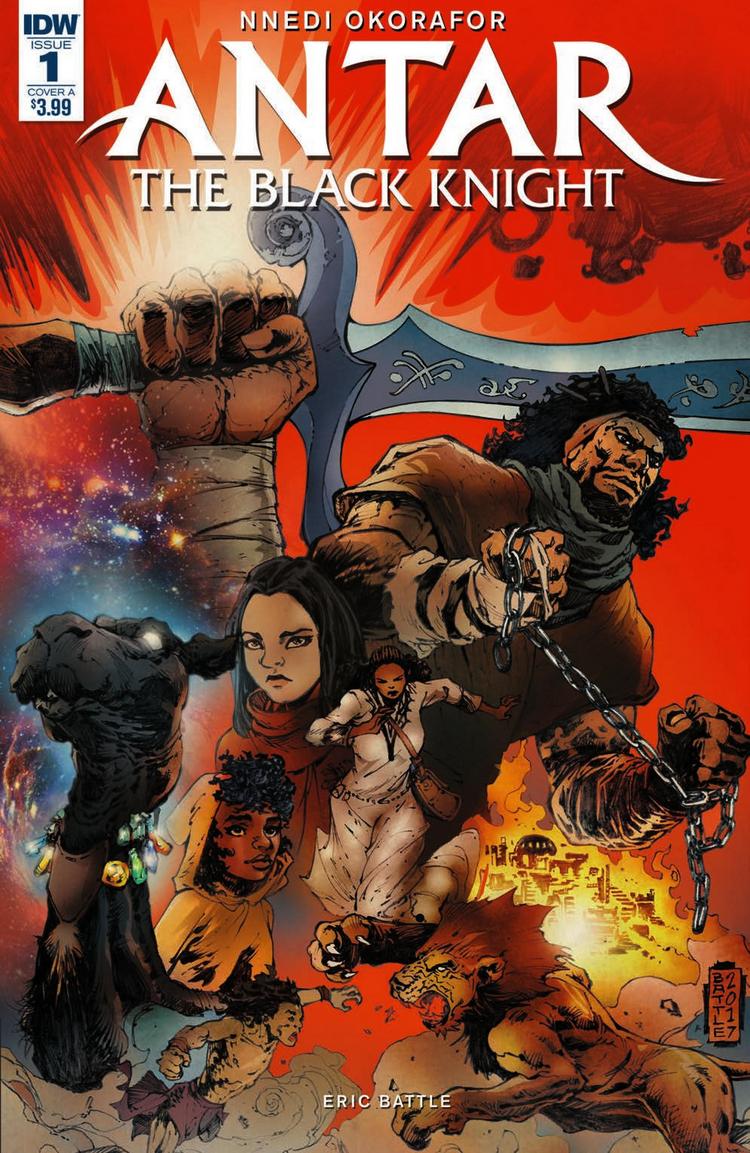 Antar: The Black Knight is a mini-series that I expected to be revolutionary and boundary-pushing. In some ways, it was. In others, it certainly disappoints.

For those who may be unaware, Nnedi Okorafor didn’t invent Antar. Though his origin has been pieced together from legends and the poetry he left behind, the essence of Antar is rooted deep in history. He is a Middle Eastern hero, born to an African slave mother and a noble father. He was raised in slavery, as a camel driver, but is now renowned as one of the greatest warriors and poets in history. The chance to spread the tale of his life  and adapt it into graphic storytelling is a fantastic premise.

Okorafor easily modernizes Antar’s origin story in comic form, creating a historical account that feels accurate without bordering on dated or dry. Following the early origins of Antar, as he begins his heroic journey, is a short introduction that is full of surprises. If this same level of storytelling is carried into the rest of the series through the exploration of Antar’s adulthood (which is unlikely will, with Okorafor at the helm) this is destined to be a comic series you will not want to miss.

The book is beautiful, that much is simply undeniable. The use of innovative and unexpected panel arrangements, coupled with a refreshing use of foreshortening to draw attention to the individual characters and actions, makes every page stand out visually and emotionally. The art is reminiscent of an 80s fantasy series brought to life; it’s pulpy and overstated without being overwhelming, and it brings an otherworldly feel to an otherwise realistic, historical account of Antar’s origin and childhood.

The color scheme ties the book together and sets the mood for the emotional changes within the issue. Brighter colors fade to a palette of muted reds and browns that are inexplicably both monotonous and vibrant.

Where the book begins to fail is the actual script, which was extremely unexpected. Going into this book, I had very high expectations for Nnedi Okorafor to create a modern, intriguing tale from this historical reference. Instead, the story feels disjointed and a bit out of touch at some points.

To put it simply and as spoiler-free as possible, do we really need another story about a man climbing on the backs of the women in his life who have suffered and died to protect him in order to succeed? I expected this book to bee fridging-free (heck, the refrigerator hadn’t even been invented yet in Antar’s time) but instead we’re left with some graphic, and ultimately unnecessary instances of suffering for the female characters, which makes it hard to focus emotionally on Antar’s origin. Part of this can be attributed to the undeniable trauma of slavery, but the way these instances were handled in the book serve only to promote Antar’s origin story, and it feels like these female characters were forgotten in the rush to build Antar from a child into a hero.

This was a gorgeous first issue and the mini series will likely only improve as we learn more about Antar’s journey, but ultimately I’ll be holding out for an entire series about his mother. This is a beautiful comic rooted in history and heroics, and it is sure to be a success as it develops and brings light to one of the most underrated stories in history.