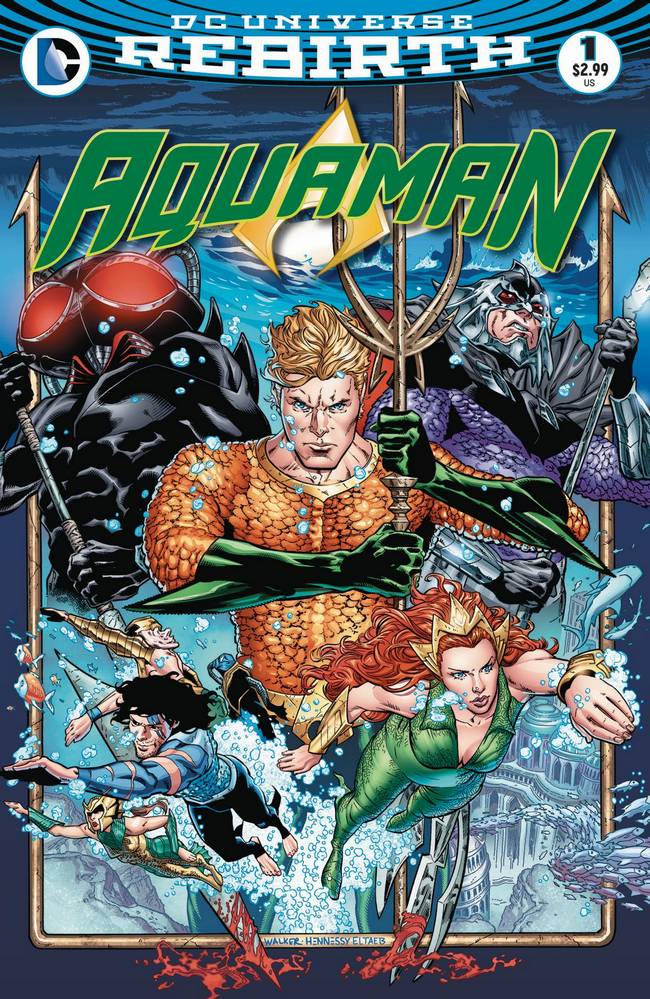 Pieces of the team that crafted the Guardians of Galaxy run that led to the film reunite for DC’s Rebirth of Aquaman. Can this team that has struck gold before reclaim the magic that was found in Aquaman when Geoff Johns, Ivan Reis, Jeff Parker and Paul Pelletier ran with Arthur and Mera?

Not really, I’m sad to report. This issue doesn’t get me there yet, anyway. Prior to Rebirth, Aquaman hit a hard slide as a title, departing pretty dramatically from everything that was making it work. With Aquaman: Rebirth #1, it felt like Dan Abnett was going to be bringing in some of the elements that made this title one of my favourites from the New 52, and really reclaim Arthur & Mera’s relationship, throne and the seas as a viable place for epic stories to be told. What I found in this issue, however, was far too much stock superheroics that were too on the nose for this character, which lead to the whole story feeling very bland.

Balancing his roles as a Justice League member and King of the Seas is going to always be a part of an Aquaman title. It should be, it is very central to the character. The grand politics and dangers that lurk under the sea and Arthur attempting to keep despots from starting wars with the surface is a great angle, and the depths are such a rich place for exploration. Abnett’s choice to keep this issue focused on what seems to be the water/land equivalent of a U.N. meeting and interrupt it with some stock-bad-guy-terrorism damn near made me yawn, as it was telegraphed so far in advance that I actually found that aspect of this story to be frustrating. The elements of this tale that work, Mera & Arthur’s relationship, the razor-thin peace between Atlantis and the surface, and some of the politics of what Arthur is attempting to accomplish, were washed away by some cliche moments with a villain that has absolutely nothing but “revenge” going for him. For Aquaman to become the big player that was worthy of a Justice League arc, focus on stock, singular threats like this are a waste of time and they undermine what makes Aquaman a unique title and character.

It must be noted that giving Black Manta a stronger motivation than Inigo Montoya’s in The Princess Bride would have helped this situation, as the character is exceptionally boring to be the primary foe of this newly launched arc. I referenced Montoya for a specific reason: Manta’s motivation is damn near laughable when you look at the broad scope that the Aquaman title was operating with prior to Cullen Bunn’s arc, and this use of the character feels ill timed and out of place. Manta’s one dimensional nature and very generic dialogue did nothing to thrill me or think that Aquaman’s mission, Mera or anything is actually in danger, or that much of anything interesting is going to come from this conflict. Black Manta is one of Aquaman’s few notable villains and this first issue is a waste of what the character can be.

Brad Walker’s artwork is strong at points, but mostly inconsistent. His strongest work can be seen when the action ramps up, but for the “talking head” portions of the issue, characters appear to be very stiff. At points, Aquaman and Mera have very little visual chemistry, looking as comfortable as a couple as if you pose a Barbie and Ken doll together. The confidence and power of Arthur is shown during his brawl with Black Manta, and Walker’s work during the fight sequence is the strongest part of the issue. Eltaeb’s colour work with water is solid, and I think he’ll be a strong colourist for this series if they start taking it dynamic places.

Aquaman #1 is acts as a jump on point for new readers, but at this moment I’m not sure it is a title I’m all that eager to dive into. The team falls short on highlighting the any of the strongest aspects of what makes Aquaman who he is, and the net result is a very straightforward superhero tale that could have featured damn near any one of the Justice Leaguers with a setting change to the U.N. and any stereotypical villain looking for revenge. I have hope that this creative team can head somewhere new and different with this book, I’ve read better comics with their names on them so I know they are capable, but this is not the best first lap of the pool for Aquaman.