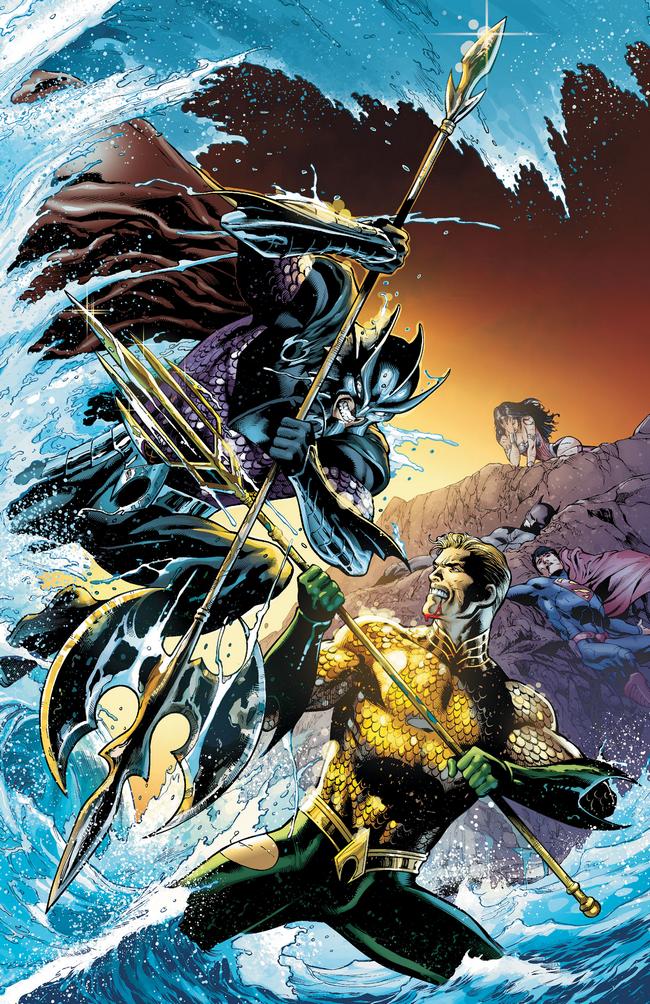 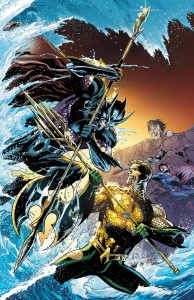 Throne of Atlantis continues with a crossover into Aquaman’s own title from Justice League #15, as the team deals with the aftermath of attacks on Metropolis and Gotham City. Amid chaos and confusion, Aquaman’s loyalties may be coming into question. Will he chose his brothers and sister in arms over the current king of Atlantis? Or is blood really thicker than water? (Sorry. Couldn’t resist.)

Johns picks up right where part one left off, expanding the dialogue between Batman and Arthur in a curious conversation regarding the ethics of war. I can’t help but project America’s recent past into the argument between the Dark Knight (an absolutist to be sure) and the former king of Atlantis. Arthur’s ability to rationalize both sides of the conflagration is meaningful not just because he’s a man torn between two worlds, but because he represents intellectual doubt in wartime amidst patriotic fervor and kneejerk hostility. It’s a well-articulated interaction, and makes the issue feel critical despite being a literal and metaphoric calm between two storms. Ocean Master’s assumptions about Arthur’s life above sea level are fascinating, as well — making it very clear that Aquaman has gone to great lengths to keep these two worlds apart. All the more crushing this escalation of hostilities is for our title character!

This issue marks an artistic change as the reins are passed from inaugural series artist Ivan Reis to Paul Pelletier, who will be drawing the adventures of the Sea King going forward. Unfortunately, unlike the move from Jim Lee to Ivan Reis over at Justice League, this shift feels like a downgrade. Pelletier’s layouts are dynamic enough, but it feels like the attention to detail for which Reis has now become famous is completely missing with the new penciller. Close-ups on individual faces, particularly in one scene between Ocean Master and Aquaman, are elegantly rendered, and the reemergence of an early series foe is exquisitely detailed, but other panels seem to suffer from inattention or rushed production. It’s almost as if panels that feature more than one figure degrade exponentially with each additional character. Hopefully we’re simply witnessing growing pains, with subsequent issues exhibiting a growing comfort for the artist. Over decades, I’ve enjoyed many comics for their exceptional illustration by veteran Pelletier — but regrettably, this is not one of them.

That said, Johns more than pulls his share of the storytelling weight, making Aquaman #15 a chapter not to be missed in this developing saga. The tale of the Sea King and his fearsome bride has never been this compelling, and any possibility to get these two back among their underwater brethren — to lead or do battle — is a very exciting prospect.