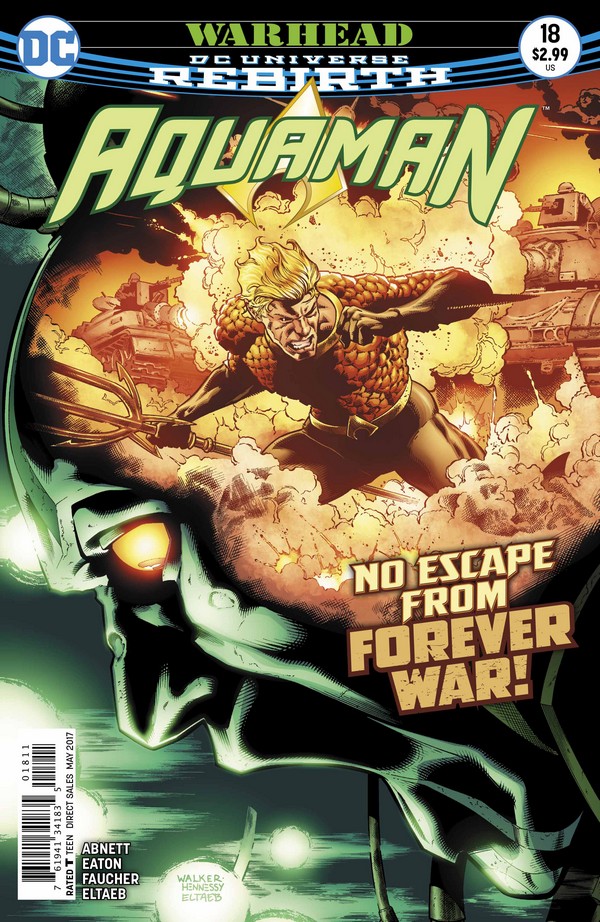 Aquaman confronts Warhead and finds himself engaged in a battle within his new opponent’s mind!

This issue concludes the Warhead plot that began in the last issue. Most of the issue takes place within hallucinations induced by Warhead, a human-machine hybrid created by the Chinese government to manage military operations. Aquaman learns that Warhead stuffers from PTSD and has been reaching out to Aquaman to try and get help for his condition. Unfortunately, because of his PTSD and his programming, the only way Warhead can manage to lure Aquaman is through using technological telepathy (“Technopathy”) to induce violence in others.

What’s notable about this comic is that this issue resolves, not through punching, but through calm discussion. Aquaman diagnoses Warhead’s issues and talks him down from acting on his violent urges, then seeks a way to get Warhead into treatment rather than killing or punishing him. That, in turn, ties into some larger themes we’ve seen in Rebirth Aquaman, as Arthur seeks to be less violent and more of a peacemaker. In fact, having him talk down a living military operations computer named Warhead feels almost too on-the-nose for that particular theme.

I feel like I appreciate what this issue is trying to do a lot more than I like how it did it. I very much want to see more superhero stories about characters dealing with problems through conversation and understanding rather than punching and other forms of physical violence. But it feels like this particular villain was too quickly introduced and dispatched to develop the themes as much as they needed to be developed. I’d have appreciated more attention paid to Warhead’s life and the trauma that indused his PTSD, and a bit more time treating those issues. I am, in general, in favor of shorter story arcs, but this arc feels like it could have used a little more breathing room to get into its characters. As is, it felt like a brief roadblock en route to the bigger stories this creative team wants to tell.

There’s also a sort of having-the-cake-and-eating-it-too aspect to Rebirth Aquaman’s anti-violence themes. It’s a book that simultaneously tells us that violence isn’t the answer and peaceful solutions are preferable, while showing us warbeasts and shark marines and tanks torn apart with bare hands and other extravagances that send the message that violence is insanely cool, actually. It creates a dissonance that doesn’t seem to be intentional and doesn’t work very well.

The art is very well done and detailed, if a bit standard for superhero comics. The colors are vibrant and there’s a nice effect where Warhead’s visions of war are shifted red whilst Aquaman’s visions of Atlantis have a blue shift. Not for the first time, though, I found myself wishing that Joshua Middleton, who drew the variant cover, was supplying the art for this series. Middleton’s variants are stylistically diverse and evocative and throw the interiors’ skilled-but-pedestrian quality into sharp relief.

Aquaman #18 is a good enough comic if you’ve been reading Aquaman. It wraps up the Warhead plot cul-de-sac in a decently satisfying way and ushers us to the next plot point. It nonetheless feels a bit thematically confused, a problem that has plagued the entire Rebirth Aquaman series.