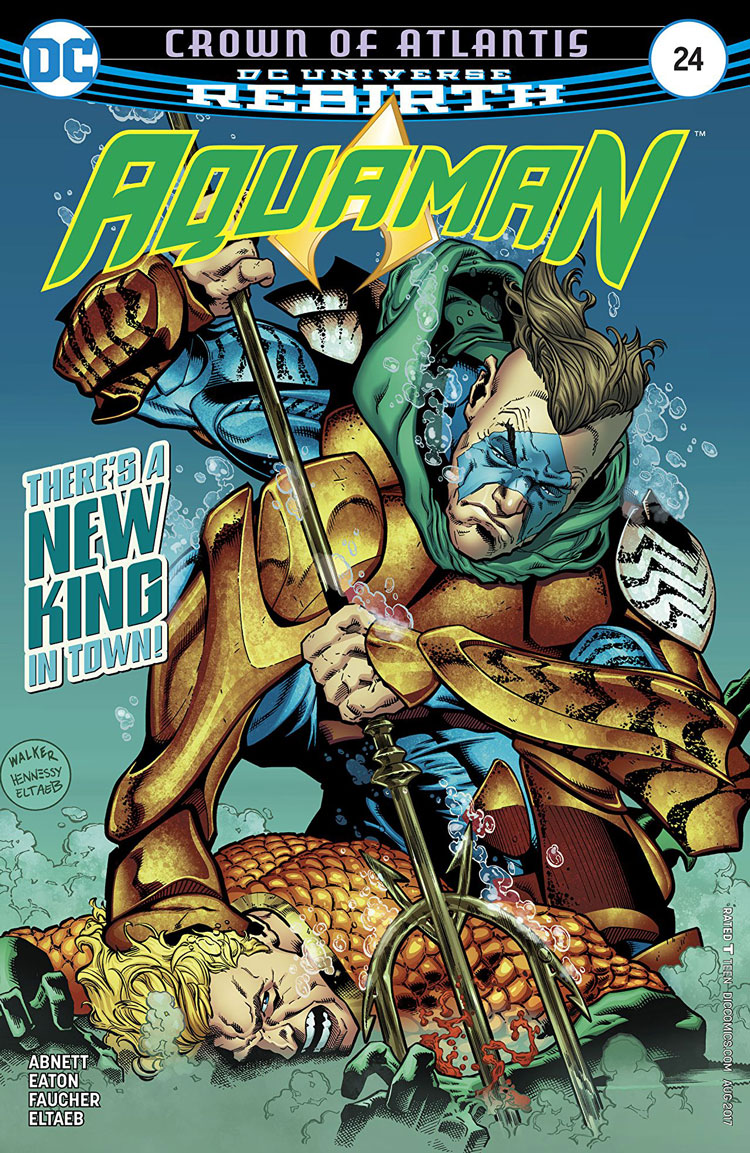 What a week to go swimming: Arthur about to lose his crown, Mera coming to around to a very different line of thinking, and Corum Rath finalizes his move from nationalistic terrorist to isolationist politician.

Atlantis has been accused of terror attacks happening on land, as well as faced attacks from Black Manta and others this past year. The kingdom is battle worn and weary of Arthur’s constant plea for a peace realized with the land dwellers. So, they are voting to usurp the rightful heir to the throne with a pure Atlantean… who also happens to be a former terrorist.

Dan Abnett has been lacing Corum Rath’s transition from the very beginning, in Aquaman: Rebirth #1. It is an “us vs them” mentality that Rath holds dear. Abnett uses this to explore the dangers of absolute nationalistic pride. This issue has spun it into paranoid isolationist policies, pushed forward with ancient magic.

It is this battle fatigued group of Atlantean leaders that turn their kingdom over to Rath. The right thing to do was is not easy and has cost them dearly. So, they will turn to Rath’s outlook for answers. A reader could almost expect them to chant, “Make Atlantis Great Again!”

The layout of this story conveys so much to the tone. While the majority of the story is in straight panels there are two moments when things go sideways. The first conveys conveying moment of when Rath shows a moment of rage and perhaps even instability, concerning his xenophobia against Arthur, who is half human.

In the meantime, Mera’s take on everything, before it comes to fruition is a bit jarring. She spends the first half of the issue trying to get Arthur to take all this news in stride and move away from his civic duties, quietly. Aquaman: Rebirth #1 made a big deal about how much Mera is uncomfortable with living on the surface, that she only does it for Arthur’s sake.

A year later, Mera is practically begging Arthur to come live with her in the lighthouse; leaving Atlantis and America to destroy each other. Mera’s character has always been quick to anger and selfishly focused on her life with Arthur. A lot of that is because neither America nor Atlantis are her original home. Her life with Arthur is her first true home, where no one is trying to use her for their own will or gain.

All the same, she still has lived most of her life in the ocean. So, while her motives are on point, their conclusion, to live on the surface permanently, feels off from Mera’s comfort zone. It plays too much into the silly romantic notion of going anywhere for anyone: as long as you are together and everything will be sunshine and rainbows.

Colors throughout the book are vibrant. Even when the story takes a grim turn, all the characters glisten and pop off the page. Hair flows gracefully in the underwater sequences and the fashion is very regal. A new king means new crown. I’m not sure if it was meant to match Corum Rath’s other garments, if it is supposed to be gold or something else, but it’s very orange. With such a full art team there are a few inconsistencies in the faces of Mera and Arthur. They do not stand out or distract from the story, on initial reading.

Fans of massive, wave crashing Arthur fighting or Mera raging will be disappointed. This action-lite issue is more about the political drama and the quick fallout at the end. It’s the type of story Game of Thrones fans can appreciate. It is also a good issue for new readers. While the names of one or two characters might elude you, it does a good job of establishing who all the principle players are and what is at stake. If you are like me then it might also sending you deep-diving into back issues. It could also leave you confounded as to how Arthur moves on from this story… and aren’t those the best types of cliffhangers?