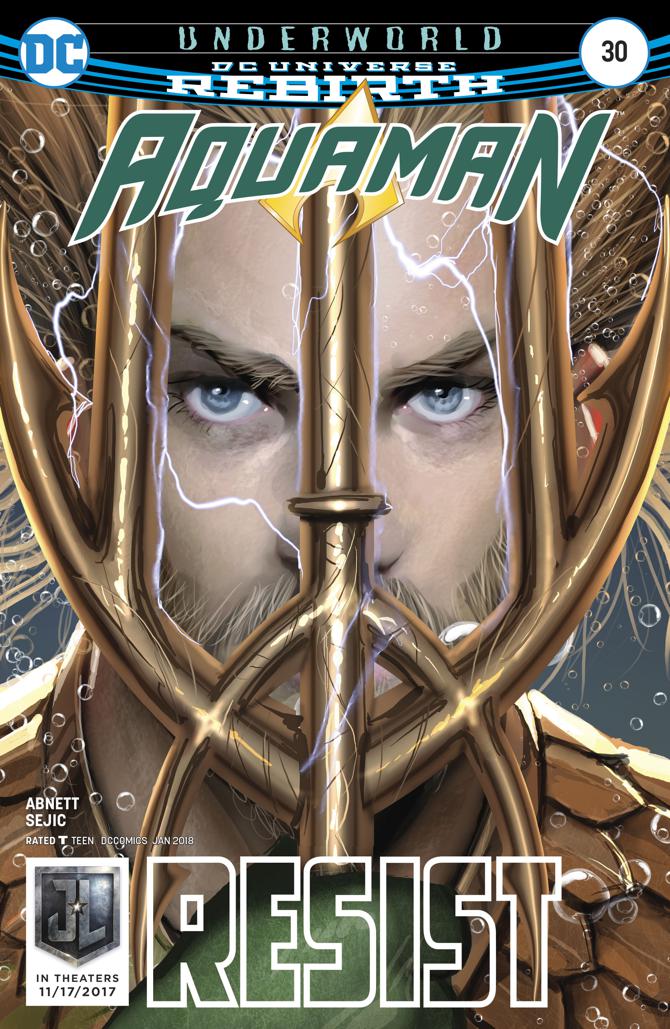 The Resistance starts making some blows against the Tyrant King in Aquaman #30, another fabulous chapter in this brilliant run from Abnett and Sejic. This underwater comic is fiery, with Arthur pushing back, rallying together an army and starting to raise some hell.

Abnett paces this one well, showing the growth of this resistance toward Rath and what a buoy Arthur’s presence is to those who are running out of hope but feel the need to fight. You can feel the power of the resistance building as the issue progresses, with Rath becoming more frantic as his Empire comes under fire. This title is building to some undersea fireworks and I’m loving every second of it.

There are some entertaining new characters in this one, as well as an intriguing addition to the cast that I did not expect. A subplot took a turn I didn’t see coming, and I love it when that is executed well. Abnett’s doing a great job pulling all the threads together into what should be one hell of a finale for this arc and even though each issue builds heavily on its predecessor, this comic isn’t entirely inaccessible and reads well as a single issue instalment.

I’ve said it before, but I have to say it again: Stjepan Sejic is the best thing to happen to Aquaman in a long while. This issue is filled with jaw dropping moments and I love the gravitas of what he puts on the page. He’s building a rebellion and the art shows that, capturing the fervour of what is growing in Atlantis. The Resistance is angry, yet disorganized, and Sejic captures the awe of Arthur’s entrance into the fray brilliantly. You can see the awe he inspires without ever seeing their faces, the gold and green flashing onto the scene in such an epic manner that you can’t help but feel the power. The final page of this issue is phenomenal, and perfectly caps off the visual feel of the whole tale. Sejic works in perfect harmony with Abnett, the two forming a storytelling battery that is one of the best in comics today.

Aquaman #30 is the next fabulous chapter in what has been an excellent series since the arrival of Stjepan Sejic on art duties. Abnett and Sejic are telling one hell of a tale here, and you don’t want to miss out on the jaw dropping action in this issue. It’s beautiful, the story is epic and big things are coming. Bring me more Aquaman as fast as I can get it.