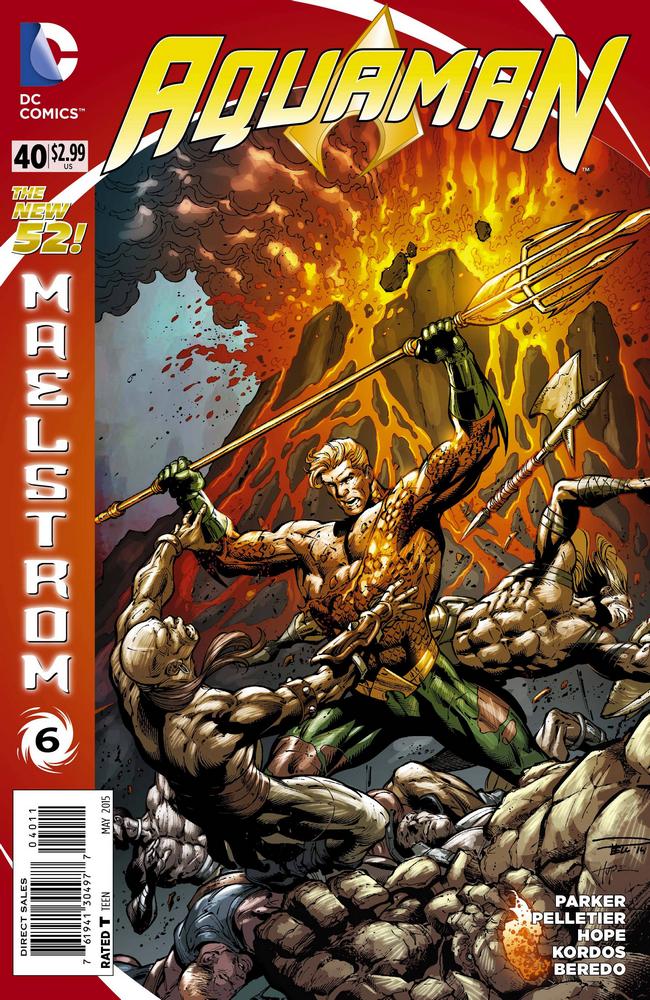 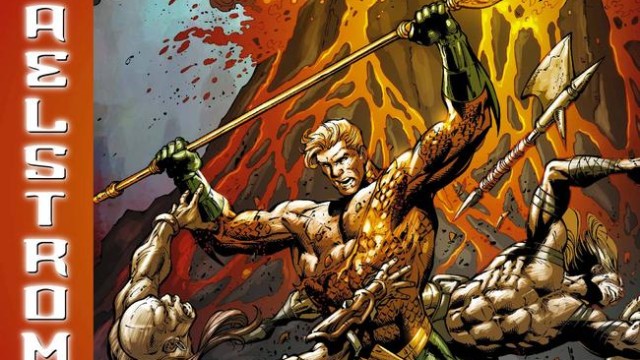 The Maelstrom arc concludes as Arthur and Mera take on Karaku and Arthur’s mother at the same time in this era-ending issue of Aquaman.

By era-ending I mean that we have come to the end of Jeff Parker & Paul Pelletier’s run, one that continued the spirit and tone set by Geoff Johns and took it to different, interesting places. Parker’s writing is as strong as ever in this issue, and he closes out his time with the best couple in the DCU very nicely with issue #40. His dialogue is great and this issue captures the adventurous spirit he has brought to Aquaman. There are elements of mysticism, political drama on the high seas, a geological avatar of mayhem, familial drama and some good ol’ fashioned beat-em-up action in this issue, and the story just clicks. Parker’s script is paced very well, capping off the arc in a nice fashion and also taking a moment to end the run in a nice way, one that highlights how this book is really about Aquaman and Mera as much as anything. He gets these characters, or at the very least his interpretation of them is one that very much jives with my ideal take on them, and this story is just plain entertaining.

Paul Pelletier’s artwork is great and we get to see him throwing down some big pencils as Karaku and Mera square off and some intensely emotional moments with Atlanna. The adventurous tone is driven home by his great action pencils and Karaku, especially, is a page stealer whenever he appears. As big as the moments with thundering action are, the subtle quirks he places in the smiles and looks of Arthur and Mera bring a special aspect to this issue, and drives home the fact that this pair genuinely like each other. There aren’t a lot of couples in comics, let alone powerful couples, and Pelletier does a great job of showing the emotional side to having your partner with you in these wild battles. He captures the good aspects and the fear well, and delivers some solid panels of the royal couple kicking some serious ass.

Aquaman #40 is a rock solid comic and a great ending to what has been a fantastic run by Parker and Pelletier. One of the strongest solo series in the DCU, Aquaman has been strong month in and month out and issue #40 is another example of how awesome a well crafted Aquaman book can be. I raise my glass to Parker and Pelletier, it’s been one heck of a run and here’s to more good times for Arthur and Mera post-Convergence.