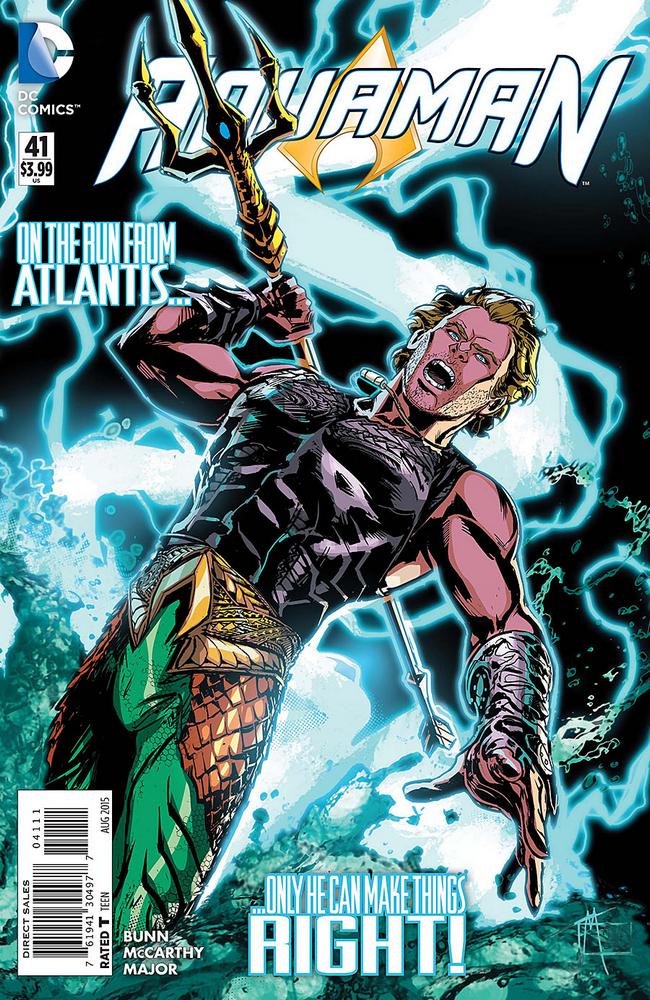 The King is back, with a new creative team and a new direction. We’ve shot forward in time, and the greatest couple in the sea are at odds with one another. A new threat is coming for Atlantis as Cullen Bunn and Trevor McCarthy begin their reign on Aquaman.

Arthur’s voice has changed slightly under Bunn, but it isn’t dramatic. The status quo has changed, and the relationships between Arthur and…everyone is different, but I can see some fun coming from this. Bunn’s take on Arthur and Mera is good, though I didn’t get the “epic” feeling from this first issue that I got from the Johns/Reis/Parker/Pelletier issues. The kingdom is less of a focus and the lense has tightened on Arthur. That’s all well and good, but it is worth noting the shift in focus. I think there’s a clever angle in this storyline, and I’m intrigued about which way Bunn will take this.

Trevor McCarthy’s artwork isn’t as polished as those who have come before him, but it fits this storyline. This is a grittier Aquaman and McCarthy’s take works. There’s some aspects of McCarthy’s style I really enjoyed, and the attitude he gives Arthur is a lot of fun. I’d say his take on the entire Atlantis-deal is more fun and more dynamic than his predecessors. There’s an energy in his artwork, and while it isn’t “perfect”, it gets the job done and I’m game for more.

Aquaman #41 by Bunn and McCarthy is a solid start for a new direction for the comic. McCarthy’s artwork sells the new angle and this pair have me intrigued enough to continue. Aquaman has been rock solid for 40 issues to this point and I think this arc has the potential to continue that streak. I’ll be checking back for in for #42.