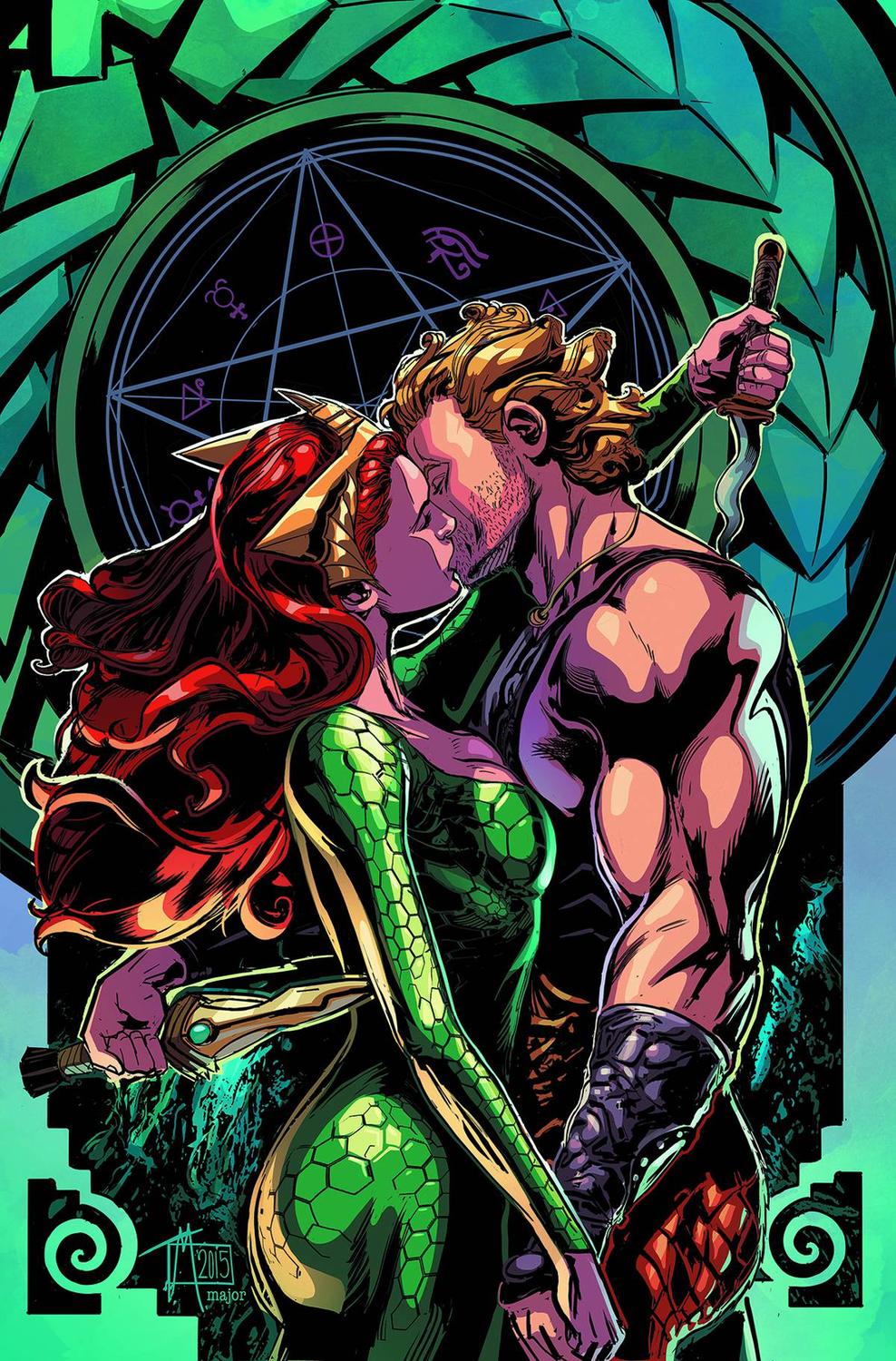 Before I start, I should warn readers that spoilers follow pretty aggressively. There would be no real way to dissect the problems inherent in this issue without revealing all the plot details, so if you haven’t read the issue, you have two choices: either stop reading my review until such a time as you’ve consumed the issue in question, or just never read the comic.

Because honestly, I almost wish I had chosen the latter. But too late for that. And there’s little sense in pretending this issue doesn’t exist.

For a little context, Aquaman has left Atlantis and become an enemy of the state, ostensibly for his defense of a shadow city looking to destroy his ancestral home. The throne has been passed to Mera, who has been fierce in her defense of Atlantis against its former king. In the dead of night, the couple reunites to talk, for Arthur to explain his motivations and the reality behind what he’s trying to do for Atlantis.

And then the terribleness happens.

To be fair, this issue wasn’t firing on all cylinders before the offending incident. Bunn’s dialogue for Aquaman seems oddly immature and tonally off-kilter compared to that from all of the Sea King’s previous writers in the New 52. There are odd moments throughout (“Wow. Thanks for your honest opinion… I guess. But… wow.”) that seem more apt for a member of the Teen Titans than the King of the Seven Seas of late.

And with yet another fill-in artist in only 4 short issues, Alec Morgan cannot live up to the promise this series had with Trevor McCarthy at the helm. Two inkers with very obvious stylistic differences in rendering detail cover Morgan’s layouts, and while there are a few panels here and there of close-up facial expressions that are quite emotive, the overall effect of the issue is that of rushed, uneven delivery. Backgrounds are relegated to swirly bubbles (even underwater architectural structures have details or texture, presumably) and bodies vary wildly in their detail and proportion. At times, Arthur’s torso seems oddly compressed, but by the end of the issue, all I can see is wild-eyed pinpoint pupils — and not just on the crazed villain.

But the real problem of this issue is that: the villain. Siren has returned, masquerading as her sister Mera, all the way through sexual congress with her common law brother-in-law.

Take a deep breath, because we’re taking a deep dive.

I don’t know that I have the answer about what it means for Arthur to have consented to sex with Mera, only to discover afterward that it was, in fact, with Siren. I have had a long discussion with the very generous J.A. Micheline about whether this constitutes rape, because Arthur did not consent to sex with Siren, specifically. I don’t know that I agree, although the argument is certainly complicated enough that I can see that point of view.

Ultimately, in this case, it’s a tad academic, given the supernatural elements of the scenario. And discussions around rape are never easy to make purely academic. This is a real life occurrence that happens to a large proportion of women and men in a variety of ways. There is no black and white answer. But here’s what I can say. It definitely lit a light in my head that said, “This is not OK.”

Rape or not, I’ve watched a sexual assault of some sort appear on the page of a comic rated T for Teen — the second from Bunn in just two months. Last month, in Lobo #9 (rated T+ for Teen Plus), the main man was raped by the female villain, to his near complete titillation. Lack of consent was fully acknowledged. And everyone just moved right along.

In this case, we don’t see much of an aftermath besides Siren cackling her delight in the reveal post-coitus, a brief fight that leads to injury, and Arthur teleporting himself away to a random locale. So, is it possible that the ramifications of the assault will play out for Arthur and we’ll see how rape or sexual assault impacts his decisions moving forward? It’s possible. But judging by last month’s Lobo, I’m not holding my breath.

But where this scenario has also led us is to a demonization of Siren’s character, a far cry from the woman Geoff Johns reintroduced pre-New 52 in Brightest Day. Re-envisioned as a first class warrior and leader of the Xebel army, Siren was a force to be reckoned with, who fought with intelligence and self-respect and formidable physical prowess. What we’ve received in Aquaman #44 is a far cry from that representation.

Now, rendered like a literal siren using trickery and sexual prowess to mock and control her enemy, we have the classic trope of Woman as Evil Demon Seductress, in terms eloquently described by Anita Sarkeesian:

The harmful, misogynist myth that this trope reinforces is that women primarily use their so-called sexual power as a way to manipulate, trick, and control men. This fallacy is widespread and pervasive. And some men even claim that women hold more power in society based on this absurd myth.

This is a de-evolution of character, and a damaging one, at best. And what’s worse, it’s the second in a pattern developing across Bunn’s DC titles that leads to a lot of questions, and each one more frustrating to engage than the one before:

I say these questions are frustrating, because some of them I have answers for, and some of them I still can’t conceive of. Some I will never understand. I’m not thankful to Aquaman #44 for raising these issues, because clearly, we’re still always engaging in them. Today. Last month. For years and years and years. And sadly, I suspect it will be years and years more yet. We didn’t need this here. It smacks of disrespect for women, and perpetrates the idea that consent is negligible — at least if you’re a man. And that’s not OK.