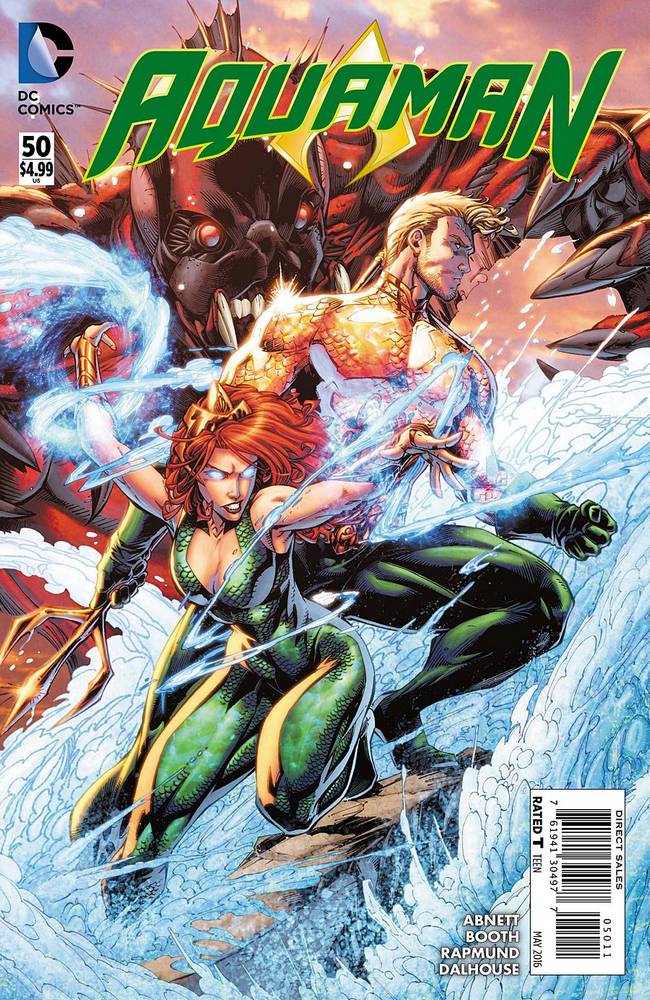 Aquaman #50 is a fun launch that provides a sampler of the Atlantean world without diving too deep into any of the underwater nuance.

Written by Dan Abnett, drawn by Brett Booth, inked by Norm Rapmund, colored by Andrew Dalhouse and lettered by Tom Napolitano, the issue opens on a homicide scene revolving around an apparent maritime-based murder. Here readers meet Reagan Irving and Arni Ajar a pair of FBI agents who decide they’re going to need some help. Before that though, the crime scene turns into a Whose Line Is It Anyway? bit as the local authorities and Ajar swap puns and fill the opening scene with gallows humor despite a background painted in ketchup-red. That plays to Booth’s natural knack to draw humorous faces and exaggerated expressions.

Once the authorities seek help in the form of Aquaman, readers are introduced to Spindrift Station in Amnesty Bay. Set as an embassy, the spectacular structure has visible deep-sea influences. Reminiscent of Peter David’s 1990s run writing the Sea King, Atlantis is set to make positive relations with the surface world. That’s all well and good, but aside from a one-liner mentioning the event-level attack from just a couple years back, the collective memory of the DC Universe seems rather short as they appear to welcome the Atlanteans. Abnett brushes up on some marketing ideas, which is an interesting change-up for an Aquaman comic, and Mera makes her debut as Aquawoman.

The art is everything you would expect from Brett Booth – animated characters bounding through the panels, occasionally striking dynamic poses. Booth’s selective avoidance of backgrounds does a nice job highlighting characters and conflicts, and the story, which ranges from deathly serious to borderline goofy provides the artist ample opportunity to draw a wide range of expressions. Booth also appears to layer in some of the sound effects giving Napolitano the opportunity to focus on lettering the story, which is done effectively and efficiently. Napolitano bobs some of the caption boxes during Aquaman’s struggle to convey the weightlessness and (potential) hopelessness of the situation.

The shining star (literally) of the art team is Andrew Dalhouse, who fills the issue with bold colors and luminous lighting effects. Frequently throughout the issue Dalhouse fills panels with blinding reflections of the chainmail gold from Aquaman’s outfit. Dalhouse emphasizes the presence of new foe Dead Water throughout the issue, choosing backgrounds and accents that amplify the red, white, and black of the character, making it seem uncommon in an Aquaman story. Dalhouse also uses some understated background choices that seem odd when taken out of context, but in the flow of the story they help Booth’s characters project out from their surroundings.

Aquaman #50 clocks in at forty pages. Abnett and Booth aren’t so much world building as sorting and sifting through concepts and ideas, which keeps the issue smartly paced and enjoyable. If Rebirth weren’t just around the corner, Aquaman #50 would be the perfect jumping on spot for new readers, but given the window between now and DC’s line-wide refresh, this is simply a fun comic that is actually worth the hefty pricetag for readers who like their Aquaman adventures quick, self-contained, and amusing.