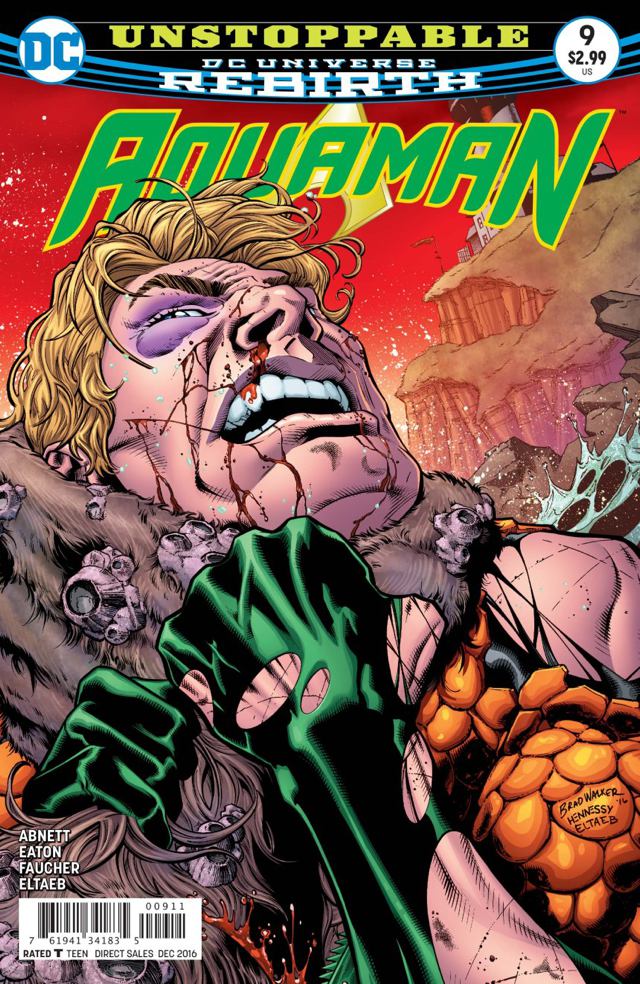 A hairy hulk is raising hell in the depths…can Arthur figure out how to stop something that repels everything? Can he call on anyone for help?

Dan Abnett is weaving in some interesting elements with the recent issues of Aquaman, pulling Arthur further from the League and continuing to make surface tensions high. He’s effectively moving Arthur more out onto an island, which is where I feel the character works best, in his own world of oceanic politics and threats. This issue’s villain isn’t a cerebral threat, by any means, it’s just a bruiser that appears to be unstoppable, but what Abnett uses the threat to highlight is where Arthur is in the world right now. Is he an effective member of the League? What is the role of Atlanteans in the defence of the world? Is he even welcome in Amnesty Bay? Abnett deftly brings these questions to the forefront with the melee in this issue, and I enjoyed seeing them explored.

The back and forth between Arthur, Murk and the other lieutenants was very well written, and I especially like how Abnett is developing Murk. He’s always a foil for Arthur, but Abnett is using the character to push Aquaman and it’s leading to some great interactions. Mera’s appearance and plot line was also well written, and her path appears to be one of the most intriguing parts of the book going forward.

Eaton’s pencils are standard fare in that there is nothing terrible here, but nothing special either. I would classify his style as what many consider to be the DC “House Style” (if there is anymore) and I find it lacking in individuality or fire. This is exactly the kind of artwork I’d expect in any run-of-the-mill superhero title and there is little here to give Aquaman any sense of individuality or uniqueness. Eltaeb’s colour work is bright and vibrant, but when paired with such generic pencil work I can only say that a script that could have been really broken loose got held back by some uninspired pencils.

Aquaman #9 is an issue that I enjoyed overall, but the script was held back by pencil work that is just too plain to make a statement. Abnett’s keeping some interesting storylines afloat here, but here’s hoping at some point the artists really cut loose on this title and give Aquaman a visual identity that is less generic and differentiates him from the rest of the heroes in the DC stable. That said, I’ll be reading more and I’m intrigued to see where Abnett & co. take these storylines.