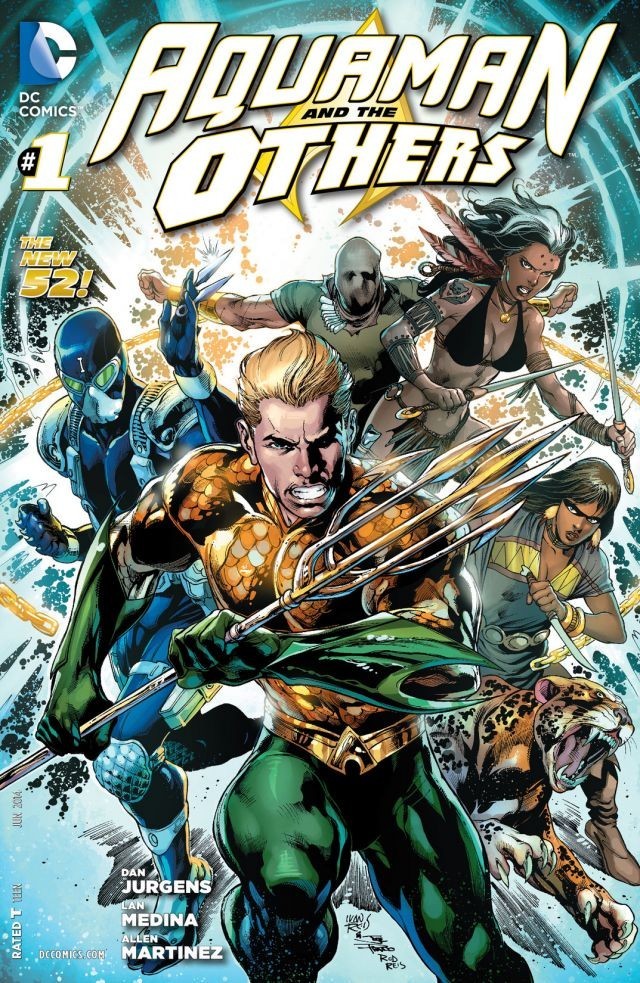 AQUAMAN AND THE OTHERS #1
Written by Dan Jurgens
Art by Lan Medina and Allen Martinez
Published by DC Comics
Release Date: April 2, 2014 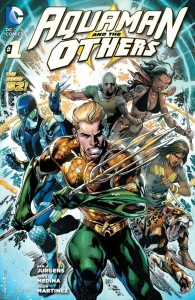 Aquaman launches a new number one, and it’s the first time in his history headlining two ongoing series at once! The Sea King has no time to celebrate, however, as his comrades-in-arms are under attack from a mysterious source, just as their Atlantean artifacts decide to stop working!

Dan Jurgens once again dives into the deep end with Aquaman, but this time has a much more diverse cast (and a whole new universe) to deal with. The Others are such an odd group in the traditional super-hero sense, but with them comes this unlimited potential for different avenues of storytelling. This first issue seems to indicate Jurgens has an strong appreciation for that potential, giving us quick looks at each member of the team individually in the genre (and setting) from which they originate.

The writer gives a strong voice to each character right away — particularly relative newcomer Sky — doling out just enough background and context to place each one for the new reader. Whether it’s the trip through the Native American Ghost Lands, or skulking aboard an international yacht in search of a hidden safe, the members of the team each travel very different paths to the extent that you wonder what would keep bringing them together, other than their now failing artifacts of power. It’s an interesting question, and one I expect Jurgens to address as the story goes on.

This first story seems clearly to be taking place in Aquaman’s milieu, but I sincerely can’t wait to see them all in a James Bond-ian adventure with the Operative, or a Tarzan-ian tale with Ya’Wara. This is what will make a team like this stand apart, and give each hero their own perspective, and illuminate personality in them all. It’s a unique opportunity, and one whose surface has (and can) only been scratched in this first issue.

Penciller Lan Medina launches the book strongly, affecting a strong balance between scenes of talking heads and outright action. Medina’s facial expressions are particularly well done, giving each woman especially a nice combination of stern, formidable, and downright gorgeous. Each character is uniquely drawn in this regard to reflect their individual ethnic backgrounds and, in the case of the Operative, age. No cookie cutter renderings here, which is a huge relief for what will likely soon be DC’s premier team book with a diverse (and gender-balanced!) make-up.

The action is nicely paced, particularly in Ya’Wara’s opening scene, although a little bit of the detail seems to fall apart by the end. Ivan Reis is a tough act to follow on these characters, though, so I’m a bit inclined to see how Medina settles in over the next few months.

A strong opening to what is somewhat of a momentous occasion for the King of the Seven Seas, Aquaman and the Others #1 has launched with a mystery worth coming back to and a cast with unlimited potential. Glad to see DC continues to take risks in developing new ideas and characters. This is one arena where the effort has definitely paid off.