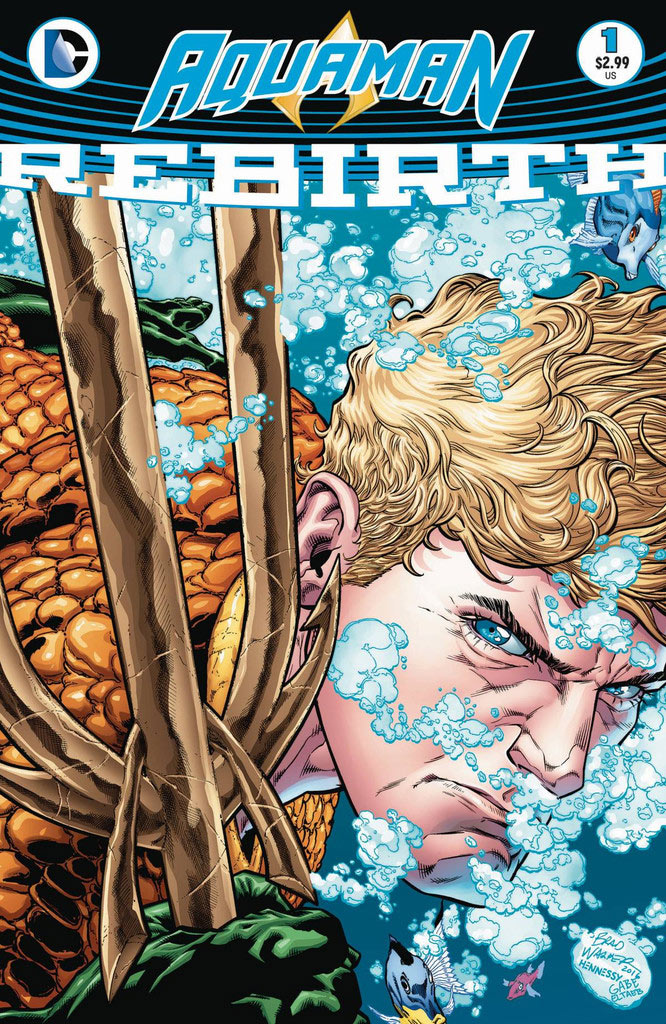 Building a bridge between the New 52 Aquaman series and the twice-monthly Aquaman series set to burst out of Rebirth, Aquaman: Rebirth #1 serves as a primer to the Sea King and his allegiances. Abnett uses a mysterious off-camera voice to narrate this new-reader-friendly introduction to Aquaman, a mystery that is solved by the end of this issue.

Under a cover by upcoming regular series artist Brad Walker, Aquaman: Rebirth #1 features some interesting divisions of labor between Scot Eaton and Oscar Jiménez. Mark Morales inks Eaton, while Jiménez inks himself. Gabe Eltaeb fills the pages with oranges, greens, blues, and earthy browns, occasionally adding in the glinting golden metal of Arthur’s trident, Mera’s tiara, or the armor worn by Corum Rath, mission leader of the Deluge, member of the Ninth Tride, and a radical terrorist bent on sending a message to the surface world.

The shift between Jiménez and Eaton is not subtle, as their styles are tremendously different, but Eltaeb and the two artists have enough commonalities present to maintain consistency. Eaton draws sixteen packed pages in between Jiménez’s pages. Eaton draws the Deluge’s attack, complete with mosasaurs and undersea craft, all of it in very traditional comic book style, with spot blacks, and plenty of hatching.

Some of Eaton’s panels are more playful than others, but the more stoic framed moments are also more meticulously detailed, so the trade-off is acceptable. Eltaeb adds not only color, but also patterns, giving the mosasaurs flippers depth and texture. He puts foam in the splashing seas and grit on the sandy shore.

Abnett essentially provides two tales in this story: the history and background of Aquaman running parallel (and overtop) the Deluge’s attack. Both stories provide ample real estate to introduce Aquaman and his supporting cast. Abnett doesn’t stop there, adding the conflict with the Deluge; mission command at the Atlantean embassy, Spindrift Station; a flashback to the Atlantean attacks; and a visit to Sam’s Seafood.

In short, Abnett shows the reader everything in Aquaman’s world, like an excited toddler reviewing recently acquire birthday gifts with a seldom-seen favorite grandparent. The best part of all of this is the fact that the writer is simply showing readers the pieces. Yes, he explains some of the pieces, but he makes it evident that the actions of those pieces go beyond simple existence.

I’m not overly keen on Abnett putting Mera in crosshairs this quickly, but I have faith that the writer will make the most of the story, as he has already shown an understanding and appreciation of Mera prior to this issue.

“Prologue: After the Deluge” borders on giving readers too much information in one installment, but Abnett balances it all nicely. Everything readers need to know about Aquaman is right here. Abnett acknowledges the Sea King’s seventy-five-year history, without belaboring anything or overwhelming the readers. There’s excitement, action, and plenty of exploration ahead.

The final page shouldn’t surprise anyone who has read any interviews with Abnett, seen advance solicits, or knows anything about Aquaman’s collection of adversaries. It simply confirms that in the Rebirth era, nothing is too precious that it needs to be saved for later on.

If there’s a good story to be told, the writers and artists are going to tell it, and Aquaman: Rebirth #1 is a great start to a good story.