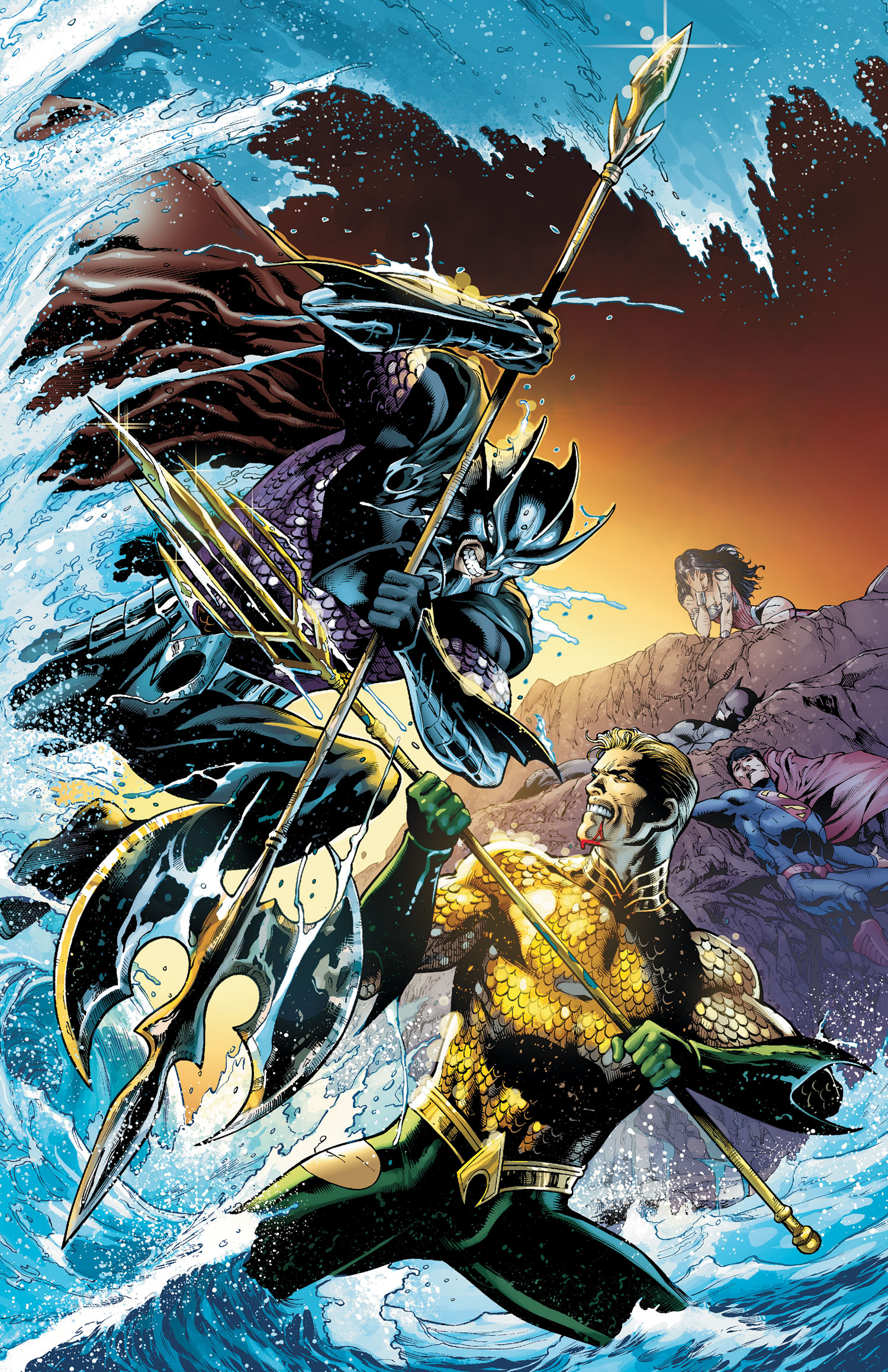 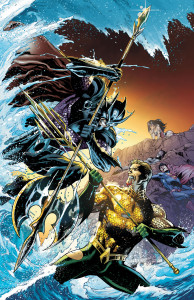 Aquaman has always been a man of two worlds, but when American missiles are fired into the ocean directly at the nation of Atlantis, the former king will need to choose a side. Will he stand by his colleagues in the Justice League and defend Boston from the hordes of the Trench? Or will he join his brother Orm, the King of Atlantis, in striking back against those who would choose to harm his home kingdom? Is blood really thicker than water?

It’s not enough to say that Geoff Johns brought Aquaman back from near obscurity to being one of the premier heroes of the DC Universe. Sure, the writer put all of his passion into rehabilitating the Sea King’s image and propelling his book to the top of the sales charts in an absolutely unprecedented manner for the character. But the real feat in Throne of Atlantis is telling an amazing story that covers all the narrative bases. From torn loyalties to mysterious villains to widescreen action, Johns has delivered an epic tale worthy of the legends we associate so closely with the city under the sea and times past. Two brothers are torn apart by misunderstanding and circumstance — not your classic hero-villain dichotomy — and an entire city suffers for it. How can you get more like classic mythology than that? 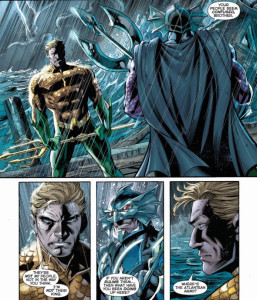 The figure of Orm, portrayed previous to the New 52 as a maniacal despot, is here a strikingly sympathetic character who only wants what’s best for his homeland and for the brother he loves. Arthur, in fact, is far more divided when it comes to his feelings for Orm, the Justice League, mankind, and Atlantis. The rawness of his rejection by Atlantis — a tale not quite told yet — is still there, and it balances well with the outsider status he still has on land and within the League itself. It’s Batman who surprisingly serves as the closest friend and ally to the former monarch, a relationship we’ve barely had the pleasure to explore before now and it comes across as strong and deeply sincere.

Johns’ pitch perfect characterization and all-out action is well illustrated by both Reis and Pelletier, both capturing the balance between quiet and loud moments exceptionally well. Reis, of course, is an absolute master at facial expression and body language, giving us spreads that will run shivers down your spine. His Mera is absolutely regal and otherworldly in her anger, and every hero from Superman to Vixen get top notch treatment under his pencil. Pelletier’s double page spreads mesh well with Reis’ style, and while not every hero is quite so glourious when he draws them, for every Wonder Woman there is a Hawkman, who looks absolutely terrifying to behold on his pages. 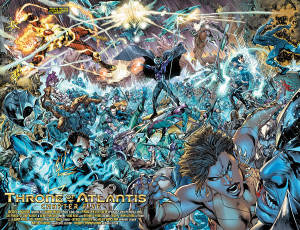 Casual buyers should be aware that this volume has significant issue overlap with Justice League Volume 3: Throne of Atlantis, but I daresay this is the superior collection by far. Toward providing a complete story, the inclusion of Aquaman #0 and 14 here is a far better prologue to the drama surrounding Arthur’s decisions than Justice League #13 and 14 are in the previous hardcover release. They create a backstory to the conflict that adds a ton of depth and gravitas to the dilemma all the characters face, and truly give the end result a sense that modern mythology is being formed. One of the strongest volumes to be released by DC Comics in the New 52 to date, Aquaman Volume 3 is a great place to start if you’ve never encountered the Sea King before, but its also a bold continuation on one of the strongest runs of the past two years. You’d be hard pressed to find a better buy for your dollars.