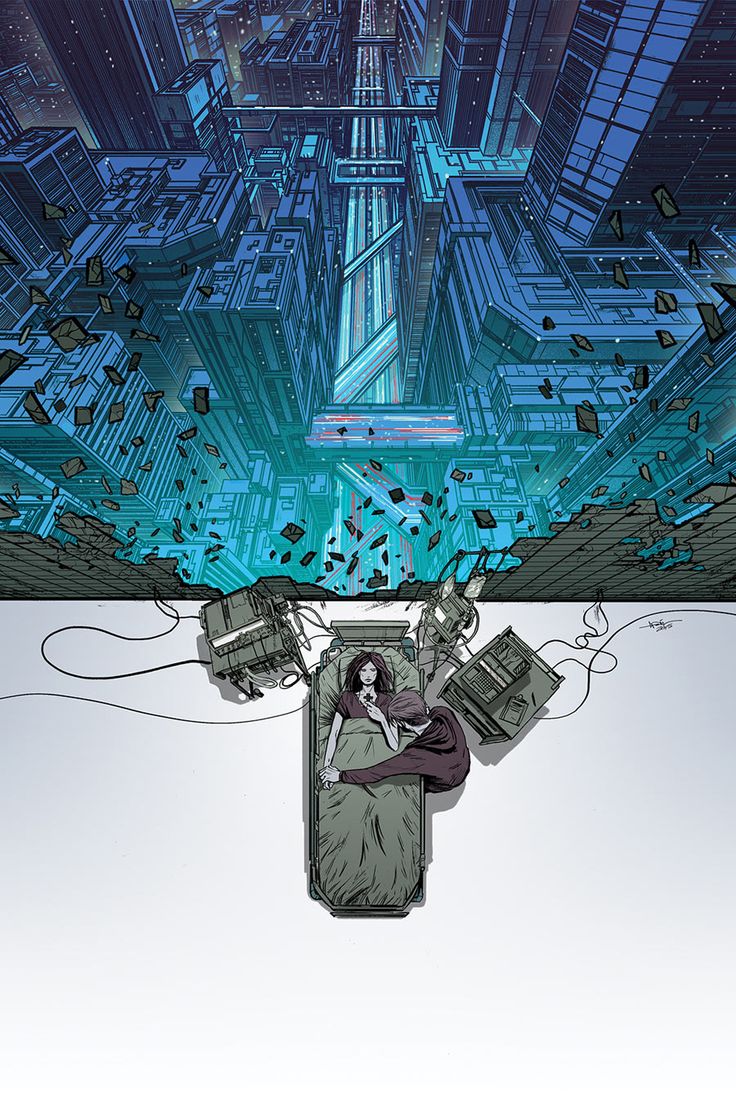 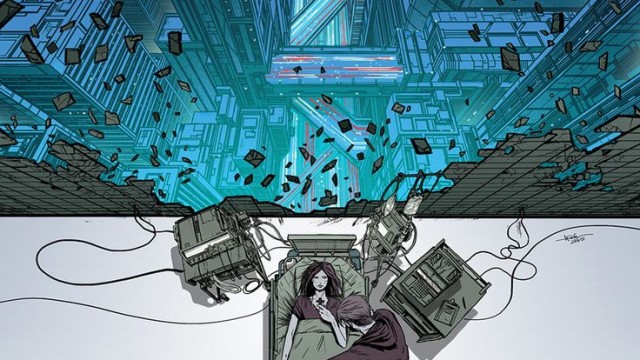 I know what you’re thinking. You’ve seen The Matrix. You know how this story goes. You’re good. But you haven’t yet, I promise. What Arcadia #1 has to offer is a much more nuanced and complicated version of events – one in which a viral pandemic kills seven billion, causing humanity to plug itself in. The story picks up six years later and shows us how different the world is from the one we know — as well as how similar.

The art style ticks many of the boxes that you expect, given the genre. Thick and heavy lines with careful attention paid to the mechanical elements of the world. We know and love this. What interests me are things that go beyond those boxes.

My favorite page was one that depicted the Arcadian version of Los Angeles. There is such a strong use of color that successfully channels both the manic luridness of L.A., while still communicating a highly technological theme that is typically done in dark greens, greys, and blues. It’s the futuristic neon city that we can easily extrapolate from the Los-Angeles-Of-Now. New York City, however, appears completely different from its current counterpart, and the entire Arcadian world is populated with flora and fauna of which the artist has only given us brief but gorgeous glimpses.

Once again, it’s the colors that really make these elements shine and we’re introduced to this new world carefully and casually, rather than being slapped in the face with the differences. The settings are definitely the strongest artistic features of the issue and I can only imagine that we’ll be treated to more as the series goes on.

However, while the settings are strong, the character design is a bit weaker, especially the faces. In the main opening scene, we meet a man, in the midst of an Alaskan blizzard, and clothed accordingly. The only part of him we can see clearly are his eyes and a bit of his nose. I started the scene understanding that the character was a certain age, however, once I could see the rest of his face, I found that he was much older than I originally thought. I wondered whether this was just lax reading on my part, but then I noticed that, in the frame, even though I could only see the eyes and nose, the lines and wrinkles that typically indicate aging were missing. Hence, my conclusion that he was younger than he actually was.

This is one particular detail, but in general, the facial expression and designs felt a bit unstable. For some of the characters–especially the ones drawn with more gentle lines — I never got a truly solid and consistent picture of what they looked like. Each angle would often lead them to look just a little different than the last.

This is something I am a little worried about, because as cool as this world is, it’s evident to me that this story is going to rely upon character connection and emotion. There is a scene that is meant to demonstrate one of the potential horrors of living in Arcadia, a scene in which I suspect I am meant to be slightly repulsed and horrified.

And yet, this doesn’t quite hit home because the character, as drawn, isn’t as creepy as he could have been. This isn’t, perhaps, directly related to the “face” issue that I’ve mentioned, but it does connect in my mind as it’s an example of an emotional moment that falls a little bit short due to character design.

Still, even with some of these problems, the story remains strong. As I said before, I am always interested in what goes beyond the typical ticked boxes of a Matrix-like world, and the writing offers examples, new ethical questions, and political problems right off the bat. This is a hard thing to do in a first issue without making the narrative feel either too-stuffed, when the writer wants to show everything off, or too-empty, when they hold back and don’t quite tell us what’s going on yet. The narrative strikes just the right balance here, smoothly demonstrating what can be done in Arcadia–and, as a bonus, doing it in a fun and interesting way.

There is a great little Wile E. Coyote text-and-visual reference that hits a perfect note while showing the reader the possibilities of a digital world. At yet another point, we have a short and sweet scene that keys us into the socioeconomic issues that have found their way from the physical world into the digital one. It’s these careful but casual hints of larger themes to be addressed, be they political or personal, that I think make this issue a success.

I also want to draw particular attention to how personal much of the story is while still managing to open up the Arcadian world. Because of its structure, I’m still not completely sure who the protagonist(s?) is, but much of the story is focused on a family who is in a rather unique situation as a result of Arcadia’s creation. This consequence and its ripples were immediately both moving and intriguing.

You wonder, at once, how it must feel for someone to experience, and also how many other people it may have happened to. The emotional element works doubly as a world-expansion, which is the mark of how strong the writing is on this issue. There isn’t a single wasted page or scene in this issue.

Except, you know, the few times when there are.

I’m speaking mostly of the one-page prologue and two-page epilogue that were included and are, I think, the biggest flaws of the debut. The prologue is barely a scene, instead a quick patchwork of moments that I imagine will make more sense as the story goes on. The epilogue is more sequential and certainly a scene, but it’s one that I also imagine will make more sense when we get to later issues, or perhaps even the next one. Given how effectively Paknadel has used the pages in between, I don’t think those three pages were used as well as they could have been.

Even reading it a few times, the prologue doesn’t do much for me as a reader and doesn’t show off what sets Arcadia apart. I go back and forth on the necessity and function of prologues, because when they work, they work–like the opening scenes of The Wicked + The Divine–but when they don’t, they don’t. I would rather have committed those first three pages to a full prologue and cut the epilogue — or just given those three pages to the rest of the story.

The epilogue seems to be introducing what I presume is the big bad of the series, but this big bad is so nebulous and general that it doesn’t do much for me. What’s more, because this world is so new and fresh, a big bad needs a bit of grounding. I need to know why I ought to be alarmed or disturbed by this new shadow in the way that the other ill side-effects of Arcadia were so smoothly explained.

All in all, I’m impressed by Arcadia #1. Though the settings are well done, the character design and detail frequently holds the story back from hitting the notes that it could have. Still, the issue is asking and answering new questions with this genre and premise, while giving the sense that there is still more to come. The writing is very strong and has demonstrated a very solid proof of concept. Because the epilogue was less developed, I’m not as invested in the oncoming threat as I could have been, but there’s enough interesting content in the main push of the story that I don’t really mind.

If you liked the Descender debut and are looking for something that takes the next step, or if you’re just into intelligent, querying science fiction, then Arcadia #1  is the book for you.