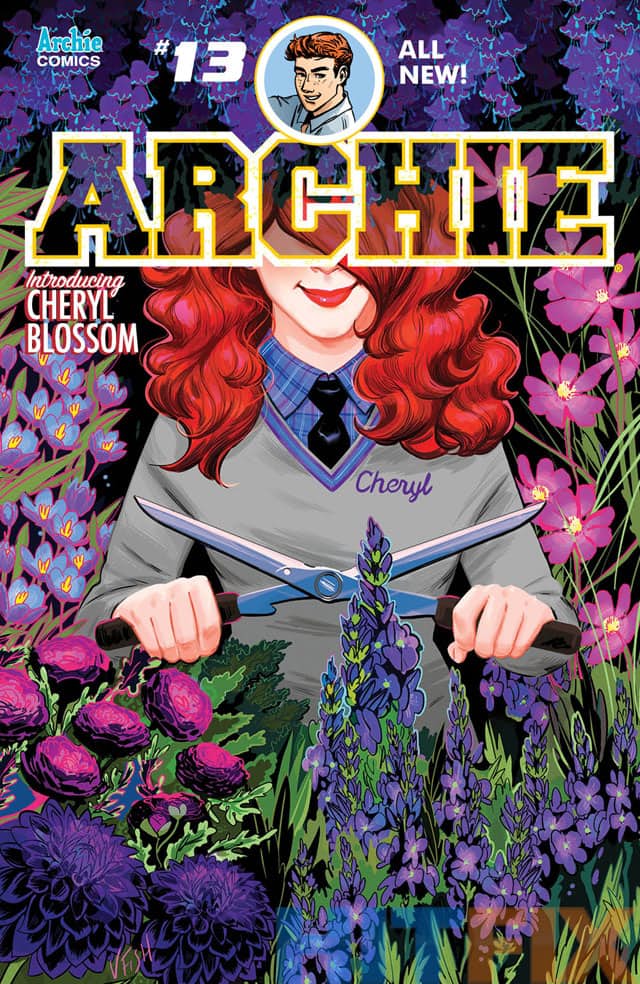 It’s the return of Riverdale’s most character trait pliable bombshell. The path laid out for the return of Cheryl Blossom is not on surprising,  making it  unfortunately boring.

There are several ways to read this latest issue of Archie. For simplicity sake two ways: new Archie readers and longtime fans.

Starting with the latter option, Cheryl Blossom has a complicated and sometimes problematic history. Her initial creation was simply to be a bombastic sexy teenager. Wealthy and snobby, she wasn’t directly out to get anyone, just an example of what money does to people.

Uproar over her body type, akin to the last JSC retail exclusive variant cover of Riri Williams, quickly lead to her disappearance. In “Explorers of the Unknown,” Cheryl’s bit part, called Blaze Blossum, could have been replaced with a computer voice and text on screen.

However, you cannot discount the visual of woman in a “scientific role” (at least what you could get in an Archie fantasy, sci-fi.) It’s not until the 90s that she’s reintroduced as a foil for Betty and Veronica. Even then, it’s not in a directly targeting fashion, but a side effect of Cheryl living her life. Betty and Veronica do more to destroy one another than Cheryl.

Several Cheryl Blossom miniseries would flesh her character out even more to include being an animal lover and protective, not purposely backstabbing of her friends. By the 2000s Cheryl is a window dressing friend and extra for Betty and Veronica. It’s in Life With Archie Cheryl’s breast cancer fight makes her sympathetic, empathetic and a platform for debate on healthcare in America.

There are multiple reference points where you can argue her point of view and main goals as a character. To choose the 90s “Love Showdown” as the basis for her reboot is an easy access point. It’s just a disservice to her and potential for creative storytelling. That’s because what readers are left with, in this issue, is a two dimensional mean girl.

She committing a classic 1980s and 90s movie plot points, that result in pranking the poor girl of their rich boarding school. There is no real discussion about these tactics being Cheryl’s modus operandi or that her victim was hesitant to trust her. It’s another detail that makes the story feel incomplete. Perhaps higher stakes at Veronica will eventually show up.

That is something that even a first time reader will see and be left with disappointment. The introduction of this character into the reboot has been heavily touted and first time readers could be left feeling, “That’s it?” Another item that might strike new readers as different is the third person narration of Veronica. Not present with Archie, this narration feels very odd, despite the chapter title separations between Archie’s story and her story.

Joe Eisma’s art is delightful. The line work is worked with in Andre Szymanowicz’s colors. There are a few times noses are dropped or detailed left behind. It is unclear if these are due to rushing or attempts to work around objects. However, it does create just enough inconsistency in the women throughout the book that you’d be lost if it weren’t for distinctive hair colors.

With no action sequences or high paced happenings, the art actually helps to move the pace along. There are groups of panels that juxtapose the grieving of Archie and Betty for their exes. It’s a cute use of traditional paneling. There is also an opportunity where instead of exposition,

Waid and Matsumoto step aside and let the creative team recap Veronica’s issues to Cheryl via images. They are subtle, clever choices that give the story a fresh and fun feeling. There is a single page where the panels overlap and tilt. It helps to convey the frustration Veronica is experiencing and drive home the lack of communication Archie and Betty are having.

Since the reboot Archie has transformed itself from the peppy misadventures of a high school gang of friends into an angst ridden YA television series, without a hook. Some stories have been better than others. This is not one of it’s strongest entries. Lack of motivation, no strong hook, or movement with the main characters makes this issue feel like yet another pacer in the never ending Archie saga. The art is an improvement over previous entries.

Sparing use of splashy layouts helps to drive home emotion for readers who thrive off the great visual cues of comics. For fans who have been continuing to enjoy this series, this issue will move them along. However, for those who need more or fuller characterization, trade waiting might bring hope down the line.