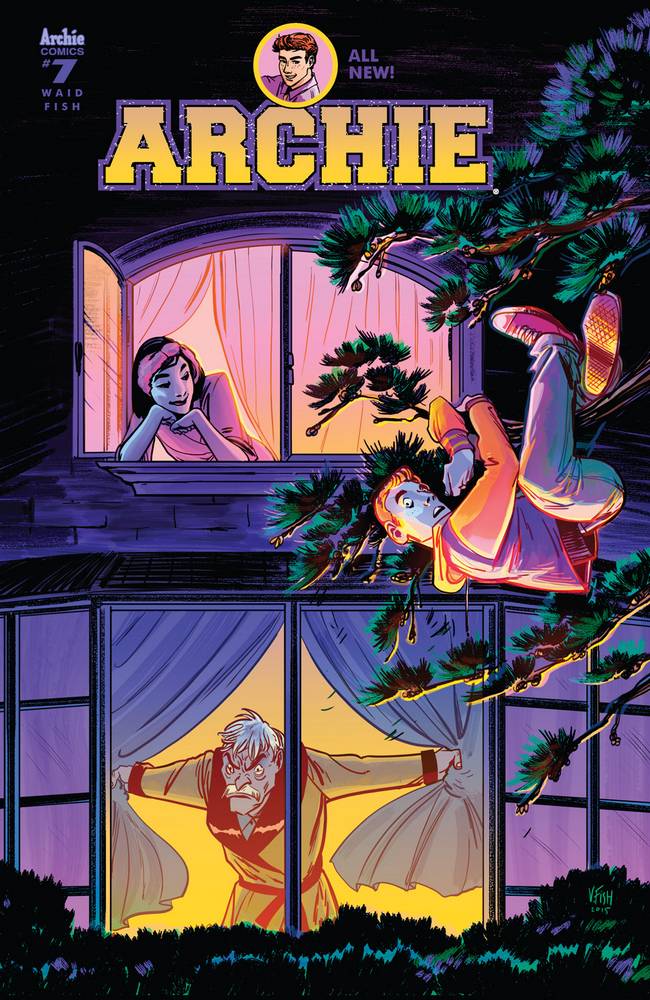 A lot has happened in the world of Riverdale High since this series started. Veronica joined the school, Betty has a new love interest in Sayid, and Veronica and Archie’s relationship is derided by her father and Reggie Mantle. This issue feels like a pause from the daily happenings of the high school setting. We don’t see Sheila, Kevin, or most of the recurring supporting characters. Instead, Mark Waid picks a surprising supporting character to move along the plot: Pop, the ice cream parlor owner.

If you were skeptical of Veronica and Archie’s relationship, Veronica’s protectiveness of Archie might begin to win you over. It’s sweet how she calls him “Archiekins” and blows him a kiss. The first part of this issue is much more Veronica’s story than Archie’s. Her refusal to acquiesce to her father’s expectations is a joy to read. Veronica Fish, Andre Szymanowicz, and Jen Vaughn also present one of the best sequences when Veronica storms up the stairs, walking fiercely past a housekeeper.

While Veronica is consistently one of this series’ most interesting characters, Waid gives Archie more depth than his usual slapstick self. We see Archie hesitate to steal information, and seek help from Jughead and Pop. It’s a touching moment when Pop tells Archie that he saw his parents when they were young. Pop also wins the best dig in this issue: “Reggie Mantle is a fifty-dollar haircut on ten-cent head.”

Fish, Szymanowicz, and Vaughn make a flawless artistic team. I love the bold colors of Jughead’s sleeves, Pop’s apron, and Veronica’s sweater. Szymanowicz and Vaughn are experts at portraying how light hits hair, especially Veronica’s. The soft backgrounds, like the sunset behind Veronica and Archie when they talk outside her window, frame the story in a simple, unobtrusive way.

Archie is doing a fantastic job of developing Veronica, but I would love to see more of Sheila, Maria, Trevor, Sayid, and other characters. Reggie has been occupying a large amount of page time, and Waid ends this issue teasing a reveal about Reggie. It’s clear that Waid is writing for the long game. I hope other characters get the level of exploration and sympathy that Reggie has been given.

Fish deserves acclaim for Veronica’s expressions alone. Veronica is one of the most likable and entertaining characters in any comic. In moments like Veronica and Archie’s conversation, Archie reminds us how fun comics can be.