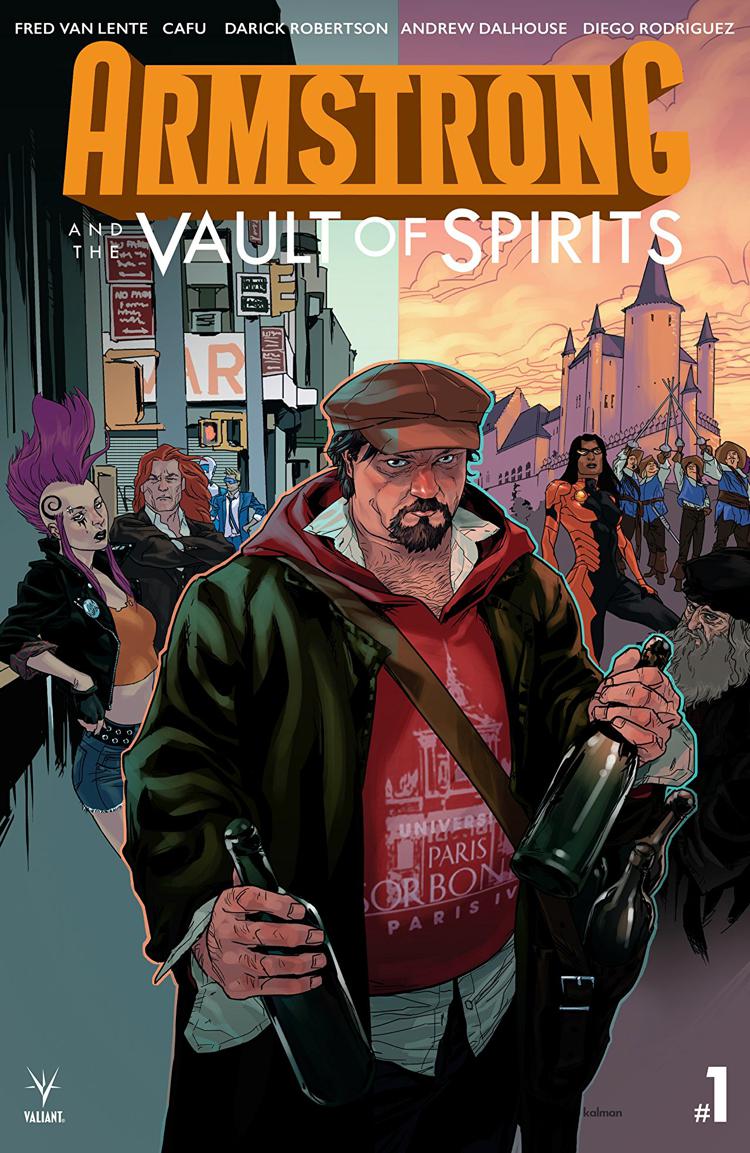 An all-star cast of Valiant characters joins Armstrong in story for an annual reflection that could very well become an annual comic special in Armstrong and the Vault of Spirits #1. Meeting at the Sows & Cows, Quantum and Woody, Faith Herbert, Punk Mambo, and Armstrong’s most frequent co-star, Obadiah Archer join Aram Anni-Pada (better known as Armstrong) to reflect on times past in a special written by Fed Van Lente, drawn by Cafu and Darick Robertson, colored by Andrew Dalhouse and Diego Rodriguez, and lettered by Dave Sharpe.

The purpose of the gathering is to plumb the secret stash of wine that Armstrong opens just once a year. The celebration brings in Armstrong’s brother, Ivar the Timewalker, and a host of ne’er-do-wells, including the Knights Templars, the Bacchae, and the Wolves of Wall Street. A shadowy figure also lurks in the pages of this comic, with a well-timed reveal that adds a little bit more depth and pathos to Armstrong’s legacy.

Van Lente opens Armstrong and the Vault of Spirits in the time following the Great Cataclysm, as Noah (no, this review is NOT the place to explain that, look it up) and family depart the great ark of legend. The story dips into some of Armstrong’s appearances throughout time, really more in teases than anything else.

The art is split into the past and the present by Cafu (present) and Darick Robertson (past) with a bit more grit and darker shadow work (including traditional appearing inks) in the past and softer tones in the present. Presumably, Dalhouse colors Cafu’s work while Rodriguez tackles the past scenes drawn by Robertson. The combination of styles and color palettes provides a nice bit of range for Armstrong and the Vault of Spirits, and gives readers visual variance in one comic. The art in each piece works nicely with the other tale, and makes it quite clear “when” the tale is without Sharpe having to tag every appearance in the past or the present beyond the establishing shot for each.

The “digital ink” style of the present day tale is a bit equivalent to a soft-focus lens in a television interview, in that it adds atmosphere and mood to the shots, but sometimes at the expense of detail. Some of the backgrounds melt into color, which frequently works, such as in the scene where Ivar enters, but in other scenes just becomes color fields that could use a bit more visual punch. Cafu’s figures are solid and expressive; they just need the world around them to be a bit more solid as well.

Sharpe’s work is solid throughout. He has become “the” letterer for Valiant, and this comic provides a nice sampling of why. Exclamations pop from word balloons, occasionally blooming into color when they do, and the dialog otherwise frames the story nicely along the way.

More seasoned readers of Valiant’s line of comics will definitely find much more to appreciate in this one-shot than a casual passerby who happens to pick Armstrong and the Vault of Spirits up. That said, revelations such as “I do have a bottle from the actual cask of Amontillado over there!” and the light-hearted approach to action and adventure certainly make this a fun read and one that would be a fine springboard for an annual, light-hearted adventure to bring together the Valiant heroes with near-limitless story potential.