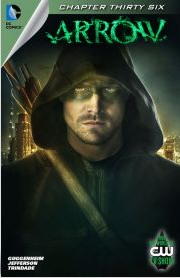 After the events occurring last week in #35, this week’s second part (reflecting events taking place before and after the final moments of the season finale “Sacrifice”) continues and Oliver has to deal with difficult choices in both timelines. Oliver is on his way to CNRI to save Laurel but gets stopped when he witnesses three guys terrorizing a woman who Oliver decides to save — a decision now tormenting him, as those couple of seconds could have saved Tommy’s life.

Some readers may have been surprised by this decision, because the choice of whether to save people he doesn’t know or people that he loves is always going to be a difficult one, even for most heroes — if you look at it from a bigger picture. In the present, Oliver ends up meeting the same three guys and takes them out without mercy as they cost him the time that he needed to get down to CNRI.

What this chapter does such a great job with is giving us a look at where most of our main characters are after what happened in the Glades. Laurel refuses to meet Oliver (or anyone, for that matter) as she is taking the death of Tommy just as hard as Oliver. Thea is about to lose her mother who is in jail for the role that she played in the Undertaking. We also find out that Diggle is recovering from his injuries received during the showdown between him and Oliver against Malcolm. The conversation between Quentin and Oliver was such a beautiful scene that I almost wished that we could have gotten it on the screen instead, because we haven’t had many scenes on the show when those two characters have interacted like that.

What shocked me was that we didn’t learn the whereabouts of Roy Harper: what happened to him after he saved those people? Where is he living now since — presumably — his house was destroyed? But at the same time, as a reader we have to remind ourselves that not everything can be explained in 23 pages. Since this is a comic that ties in with the show, there are revelations that they want to do on-screen, which is appreciated because some things are better explained in a TV format than others. We don’t learn much about where Felicity is either, other than the fact that, like Diggle, she was trying to reach Oliver without any luck. It will be interesting to see where we find her this fall.

Just like he has done several times on the show, in this chapter Oliver is now beating himself up ever more for everything that has happened, and in the end he decided to leave the city for an unknown amount of time. The conversation between Oliver and Diggle was one of my favorite aspects of this chapter (as is any conversation these characters has) because Diggle’s words are always so powerful as that voice of reason. You can really see this being a scene that they would have done on the series with Amell and Ramsey. Some will argue that Oliver is being selfish for abandoning his little sister who needs him the most right now, but from an emotional standpoint, you do feel he is doing her a favor. The current state he’s in right now won’t help her at all.

The character that I get concerned for after this chapter is Thea. Presumably she is going to be completely alone in terms of having none of her family members around her — unless Oliver knows that Diggle will keep an eye on her — from now up until the time when the second season starts. This could, however, be an interesting way of putting Walter Steele to use, because even though he divorced Moira, you know that he still cares a lot about Thea. I wouldn’t be surprised if it’s revealed he has been taking care of her by the time Oliver returns to Starling City.

Guggenheim has done an amazing job throughout this digital series with writing  stories that fit in well with the way that he — along with the co-creators and writers — direct the show, giving the same emotional and action beat on digital pages as the TV series has. The second panel on the twentieth page was powerful, as it showed a devastated Oliver sitting by his deceased best friend. While I as a reader was taking in that sad image (along with the image of Oliver at Tommy’s grave), it was the second time I realized that these two chapters have been the digital series’ most emotional ones so far and that is a big credit to Guggenheim’s writing. It would be foolish of me if I forgot to mention the amazing artwork that was done for these chapters.

Conclusion: a powerful second part of these two chapters that reveals the damage, as well as the status of our characters. It’s going to be incredibly interesting to see what will happen in the show’s second season, once we reach the fall.