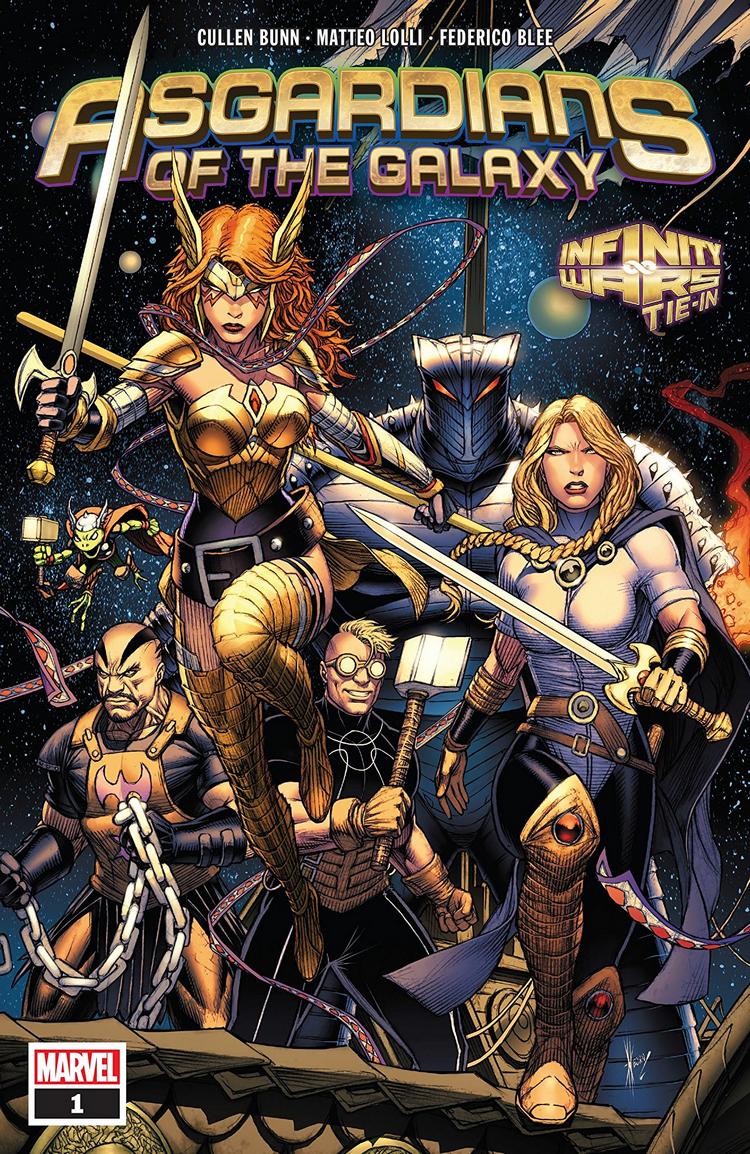 Skurge’s exclamation as he rushes into battle alongside Brunnhilde the Valkyrie hits the mark for this Asgardian-filled adventure that is fueled by in-your-face action.

Writer Cullen Bunn returns to one of his apparently favorite characters in Brunnhilde, reuniting with her to tell more tales of the journey Valkyrie shares with her body buddy, Annabelle Riggs. Bunn wrote Valkyrie in Fear Itself: The Fearless and the pair in Fearless Defenders. His familiarity with the duo does not overpower Asgardians of the Galaxy #1, as Bunn whirls through the vaguely defined confines of the cosmos to introduce the cast and their adversary.

Nebula opposes the crew in this issue, and a surprise rider appears as the controller behind the Destroyer on the final page of Asgardians of the Galaxy #1. That controller – and the Destroyer – are the protagonists of this tale, allied with Angela, Skurge, Thunderstrike, and Throg. It’s a fun collection of fan favorites who might not have durable enough personas to carry titles of their own, but collected here, they offer humor, action, and camaraderie – both for their teammates and the reader.

Bunn’s tale is fairly straightforward, but he tosses a time hop into the middle of Asgardians of the Galaxy to keep readers on their toes. Bunn is clearly having fun with this adventure, digging into new voices that he is able to access through his familiar, Valkyrie. Bunn not only brings in a handful of Thor-tangent characters, but he also samples the galactic garrison nicely, bringing in Badoon, Chitauri, trolls, and Kronans.

There’s plenty for Matteo Lolli to draw and more than ample opportunity for colorist Federico Blee to go nuts. This book is filled with bold, brash coloring that explodes from panel to panel. Blee juxtaposes backgrounds and highlights to blend through new colors on the characters in Asgardians of the Galaxy #1, but never does he sacrifice any of the lithe linework Lolli has brought to the pages.

Lolli’s layouts are as fluid as Blee’s colors, making this comic feel fluid and guiding the reader throughout the adventures of Angela, Annabelle, and their assorted Asgardian allies. When the shot calls for a tight close-up on a smirk, Lolli delivers, balancing shadow and expression to give readers an easy-on-the-eyes adventure.

Magnificently lettered by Cory Petit, with thunderous “CROOOOOOAK”s and brilliant “BOOM”s, this comic brings the thunder and the lightning, and promises much more to come. Petit is tasked with filling Asgardians of the Galaxy with Marvel’s trademark (?) Asgardian font, but he does so masterfully, bringing human inflection through the divine voices and right back again.

Bunn’s the type of writer that doesn’t put everything up front in the first issue of his story, and Asgardians of the Galaxy is no exception. The time hop in the middle takes a second or seven to process, but it summarizes the setup for the reader quite nicely. And this is a setup I’m onboard for. When I first read of this being an actual title, I chuckled. Then I read more about it: Bunn and Valkyrie? Yeah, ok. The Fearless is one of my favorite Marvel event byproducts from the last decade and a hardcover I frequently pluck off the shelf for a re-read. Throw in a few more overlooked characters that have crossed paths with Mjolnir-wielders, and it’s worth the time and money. It’s fun to see a book with a wacky title fueling the premise, and even more fun to read it. Given the recent announcements around the Guardians brand, I’m not sure what the timeline is for this title, but I’m planning to enjoy every second.