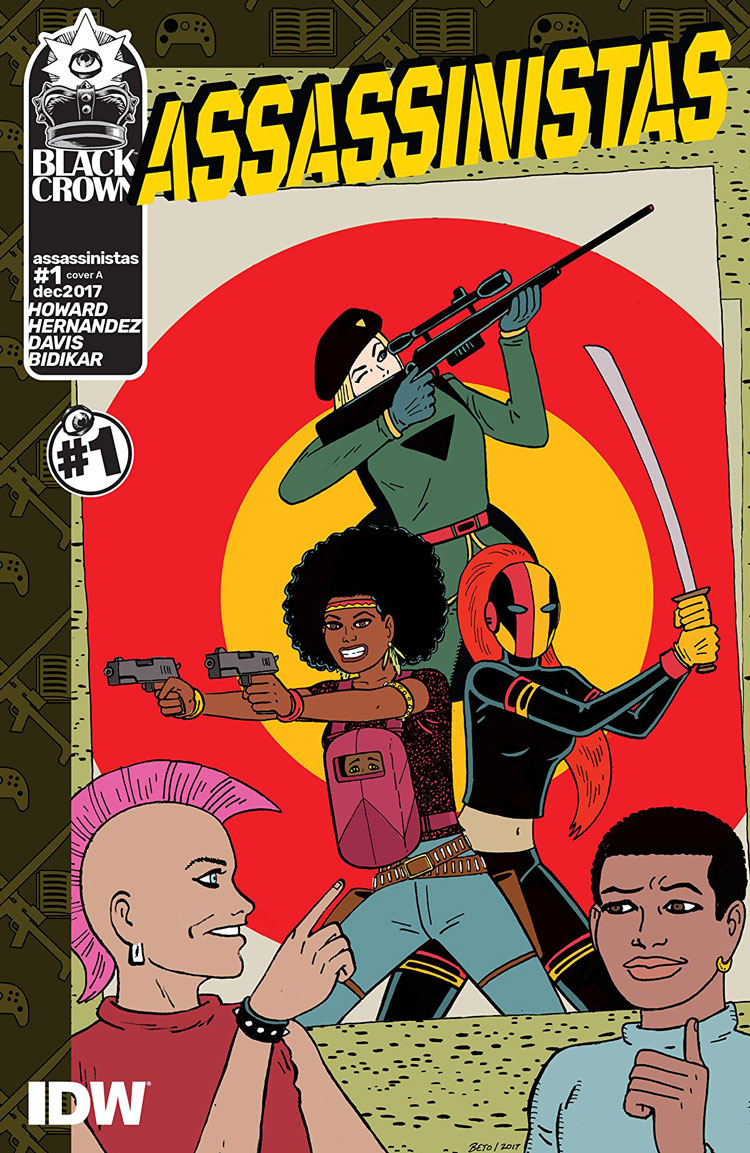 When news first broke that Quentin Tarantino was in talks to develop a Star Trek movie, millions were understandably upset and inconsolable because it meant that his long teased follow up to Kill Bill, featuring the children of Vernita Green and Beatrix Kiddo confronting their mothers’ legacies, was even further from the realm of the possible than it’s ever been.

Thankfully for us, Tini Howard and Gilbert Hernandez have heroically stepped up to fill that cultural gap with Assassinistas.

Past the opening sequence showing the assassinistas in the prime of youth is an intriguingly inverted take on the tense and ultimately violent reunion between Tarantino’s deadly vipers. Octavia comes to Charlotte’s doorstep feeling vulnerable, and, to an extent, at the other woman’s mercy — looking to sell her kidnap insurance for her children to pay off her son’s college tuition. Charlotte is more viscerally and recognizably vulnerable, in her third trimester with a toddler to chase after.

Compromised by pride and surging hormones, the pair clash in a situation that could explode into violence at any moment when Kyler (Charlotte’s son) finds a knife playing with Octavia’s purse, but it ultimately fizzles out — until Kyler is kidnapped, seemingly by another of their former colleagues, putting the very pregnant Charlotte on the warpath and Octavia into action to clear her name.

Compounding all of this is Octavia’s son Dominic, dropped from his classes and dorm assignment due to non payment — while in a very compromising position with his boyfriend Taylor, who he absolutely has not told Octavia about.

Howard weaves a complex network of race, class, and gender dynamics into the relationships at the core of the series that sit like tripwires between them. None get tripped this issue but the topic of Dominic’s sexuality, which is sprung on Octavia when she’s expecting a Taylor-as-in-Swift to show up with her son to help track down Kyler and gets a Taylor-as-in-Kitsch instead. That’s the bombshell that the issue ends on, making it clear that the story will be family first and action second.

Assassinistas is definitely the most daring creative pairing of Black Crown’s announced titles, pairing blazing hot newcomer Tini Howard with the mythic Gilbert Hernandez, but once they’re seen together on page, the chemistry seems as obvious as Becky Cloonan and Steve Dillon were in their tragically shortened Punisher collaboration. Howard has been on something of a world tour of licensed and work for hire titles since debuting on a Poseidon IX story as the winner of the Top Cow talent search, racking up credits everywhere from The Magdalena and Hack/Slash, to Power Rangers and Rick and Morty. But the keys to Assassinistas’ success lie in her Black Mask mini-series The Skeptics.

When set against her collaboration with Curb Stomp’s Devaki Neogi on the Cold War era caper, pairing Howard with Hernandez seems almost too obvious given the retro appeal of both artists — despite the considerable gulf between Neogi’s thick brush work and Hernandez’s uniform, razor thin lines.

What’s so inviting about Assassinistas and what sets it apart from The Skeptics is that the latter was a period piece geared in all respects to evoke the sixties, while in the former, writer and artist are working in two parallel, utterly different time periods (except for the 1970s roller disco flashbacks). Hernandez is depicting a thoroughly contemporary world with figures drawn in his thoroughly retro style, which, instead of resulting in the kind of clashes that marked the first couple issues of Kid Lobotomy, unite in a charmingly atemporal world reminiscent of the sensibilities and production design of Tarantino’s Deathproof.

It’s a dynamic that plays into the generational gap between Octavia and her son, but there’s a fluidity to it too: in flashback sequences to the roller rink where Octavia met Dominic’s father, Hernandez’s style is recontextualized as the dominant and singular aesthetic. The relationship between his style and the present also gets reversed in novel ways when hyper contemporary artists like Paulina Ganucheau take on cover duties to evoke the 70s flashbacks, using touchstones like Beyoncé’s nostalgic-but-now Blow video to conceive of the era.

Beyond all of the stylistic layers of the comic, the key virtue of the comic is that it’s stepping well outside of the norm for female lead action comics, diverging even further from the rarity of Grown Ass Woman Bobbi Morse to embrace middle aged motherhood as the series’ center of gravity.

Assassinistas goes beyond even a singular portrayal of motherhood to at least two very distinct modes of it: Charlotte’s white middle class relative comfort that allows her to be a married stay-at-home mom looking after one child with the next well on the way, and Octavia’s working class single motherhood of a son who she has to start looking at as an adult with a life and world of his own whether she likes it or not.

What’s so refreshing and intriguing about Assassinistas is how it blends concepts, characters, and aesthetics that have belonged in comics for a long time in completely disparate contexts into a singular work. There’s plenty of comics out there in the world about women in the stages of life that we find Charlotte and Octavia in. We’re just used to seeing them in suburban slice-of-life harbacks from the likes of Posy Simmonds or Adrian Tomine, not as semi-retired assassins who still carry combat knives in their purses. Hell, even Helen Mirren’s character in RED had to be written into the movie.

Likewise, Gilbert Hernandez and his style, along with his legendary brothers, have had a long and acclaimed life in comics. We just don’t see them much in single issues in the direct market. As for Tini Howard, well, we’ve seen her just about everywhere lately, just not here.

Assassinistas isn’t a swirl, a mash up, or a novelty. It’s a complex engine of performance parts that took careful consideration and a fearless attitude to assemble.