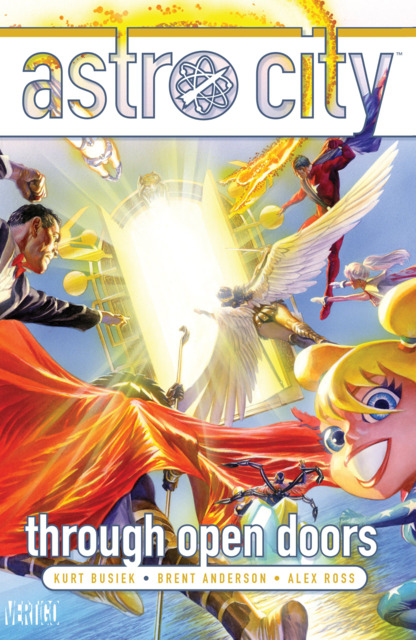 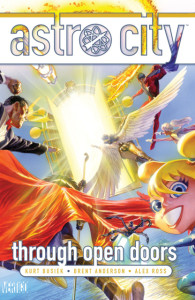 Y’know those vacations where you go back to a city you lived in once upon a time and everything looks similar, with a few subtle differences, and all sorts of good memories start to filter into your mind? That’s what happens when you crack open Astro City: Through Open Doors.

Kurt Busiek is a master storyteller and there is nobody in the game (nor has there ever been) who can execute a story about the people on the periphery of super powered heroes. With this volume Busiek shows that nothing has slowed in Astro City, and that there is still a place for these stories in the current comics landscape. His character work is magnificent, introducing characters that immediately relatable and likable: people who don’t need an immense amount of background story as they are, for the most part, regular folks like we, the readers. No other series has ever captured the every-day-person-in-a-world-of-powers quite like Astro City, and all that magic is still there in this volume. This series hasn’t skipped a beat and the stories told within this volume are as high a quality as those in Life In The Big City and Confession, which is astounding considering the time that has passed between said books. His unique view of super heroes and the world around them is unparalleled in comics, and through his strong writing he brings in elements that don’t work in comics all that often. Giant alien emissaries and lunatics who break the fourth wall are found in this volume, but they work. Any tropes that used feel fresh due to Busiek’s perspective and after all these Astro City stories he does an excellent job of keeping things fresh and exciting.

Brent Anderson’s art is solid throughout the collection, showing remarkable consistency from start to finish. He’s not the flashiest artist in the business, but his style sets the tone of Astro City perfectly. His work is as strong as the first page of Astro City he ever penciled and reading his work feels like coming home. Astro City has only ever been shown by his hand, so there is an immediate comfort from seeing his artwork paired with Busiek’s words. Anderson is a great visual storyteller and it is his work that makes these ‘regular people’ characters so easy to relate to. His style is easy to read and the first word that comes to mind when I see Anderson’s art is “classic”. This entire volume of Astro City is well penciled and visually engrossing, and everything you’ve come to expect from Astro City. Open up the book and you’ll know you’ve come home, and that’s all you need to know about the visuals.

Astro City: Through Open Doors is another fantastic volume of one of the most consistent series ever created. Fantastic writing and solid art combine to form captivating stories you won’t be able to put down. Busiek and Anderson are in top form and the product is a great collection for comic fans to put on their shelves.