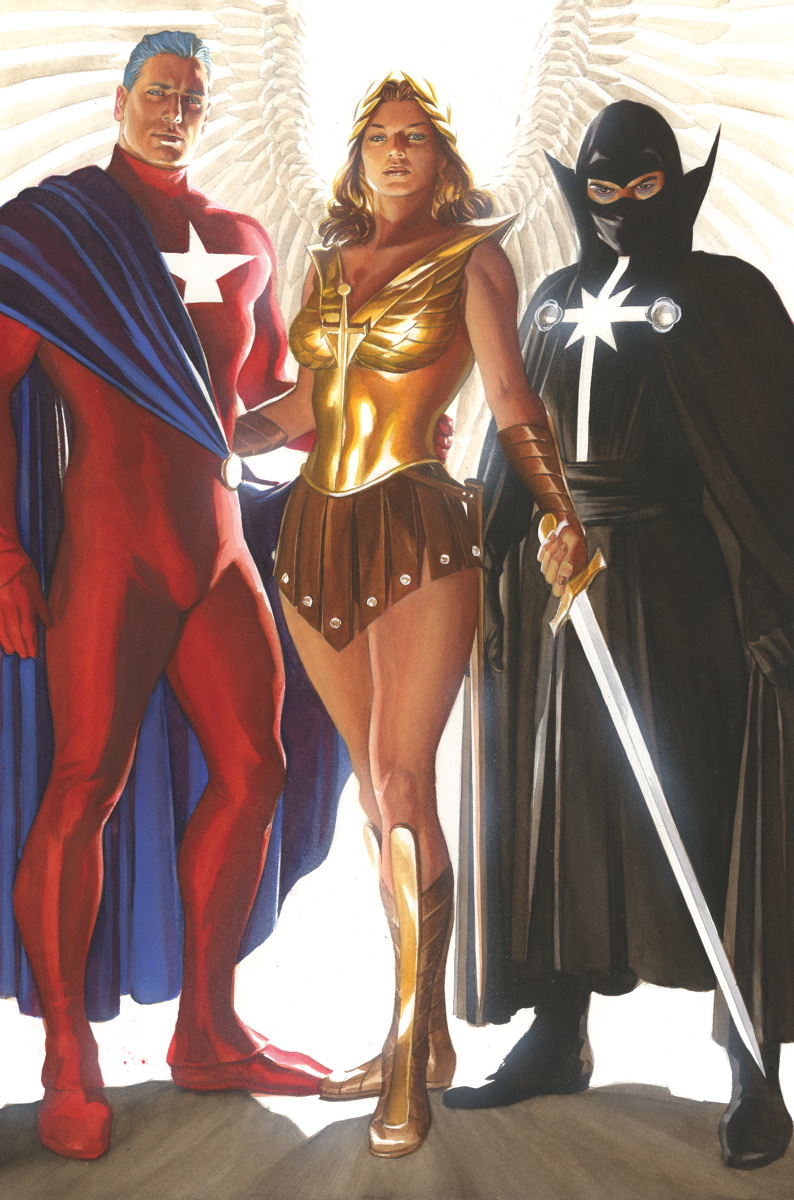 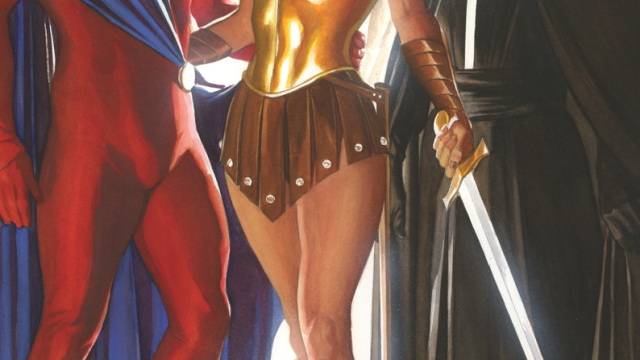 Someone is out to undermine Winged Victory and the work she’s done for women all over the world, and it’s up to Samaritan and the Confessor to help clear her name. The only problem is, the council that granted Victory her powers doesn’t like watching their champion work alongside male heroes. Will Victory honor her benefactors or follow her conscience?

Like Supreme, Watchmen, or even Venture Bros., Astro City is clearly meant to be a mix of original story and a way of looking at the super-heroes it purports to imitate with a sincere critical eye. To that end, the cover of Astro City Volume 10 (illustrated by the myth-maker himself, Alex Ross) makes it pretty clear up front what we’re going to be getting out of Victory: the Trinity of DC Comics, reimagined. And along those lines, Busiek and Anderson don’t disappoint.

Busiek’s look at the political nature of Wonder Woman through the lens of Winged Victory isn’t parody, but a sincere exploration of what it means to be a warrior representing all women — if not what it means to be a vocal feminist in general. Victory has a really poignant moment at the end of the story, when she’s being confronted by the powers that be, where she acknowledges her own imperfection and asks,

Her ongoing sexual relationship with Samaritan is brought to question (hmmm. That sounds familiar.) as is her place among the other heroes of Astro City. And yet, the clear implication is that these are her choices, and they don’t make her subservient to him or the Honor Guard. If anything, she lifts them up. Critical fans of Wonder Woman’s place in the New 52 might want to take notice here.

There are other nice moments Busiek brings to the story, particularly the idea of Winged Victory training the first male ever in her school, and the Confessor’s own new corps of young men patrolling the streets. And rather than just seeming like commentary on the state of our heroes elsewhere in the DC Comics family, this arc feels like a refraction of the zeitgeist — another angle on a new, building mythology that could be seen from a multitude of different angles, and no two exactly alike.

Anderson’s art takes an almost similar approach to Busiek’s writing, harkening back to an older, although not necessarily simpler, era. Reminiscent in style to the Neal Adams/Marshall Rogers era of comic book illustration, a time of deconstruction for the super hero genre as well, Anderson’s figures and layouts reflect a very classic, but humanist, take on the super-hero icon. Each character is undoubtedly human, depicted not as unapproachable or unknowable, but feeling very distinctive and down-to-earth (even when flying above it).

The strain of Victory’s current struggles is written all over her face with Anderson’s pencilling, and it only gets more harsh when she transforms back into her original identity. In a very real way, Anderson’s work is the opposite of cover artist Alex Ross’s golden, glistening depictions of icons that cannot be touched by mere human hands. And in that sense, the juxtaposition is extremely smart. It only serves to reinforce the depiction Brent Anderson seems to be going for.

Also included in this volume is a primer on Astro City itself, the neighborhoods, its superhuman denizens, and history. It makes this volume, number 10 in the overall series, number 2 since the Vertigo relaunch, an excellent introduction to the world and its motivations. Along those lines, I heartily recommend this book to a few different audiences: those who love super-heroes and don’t mind seeing their favorites cut open on the table, respectfully; those who just want a thought-provoking super-hero story without all the continuity demands of classic DC or Marvel characters; and those who are ready to take on a whole new world of wonder, origins be damned. It’s a wise choice for all three.