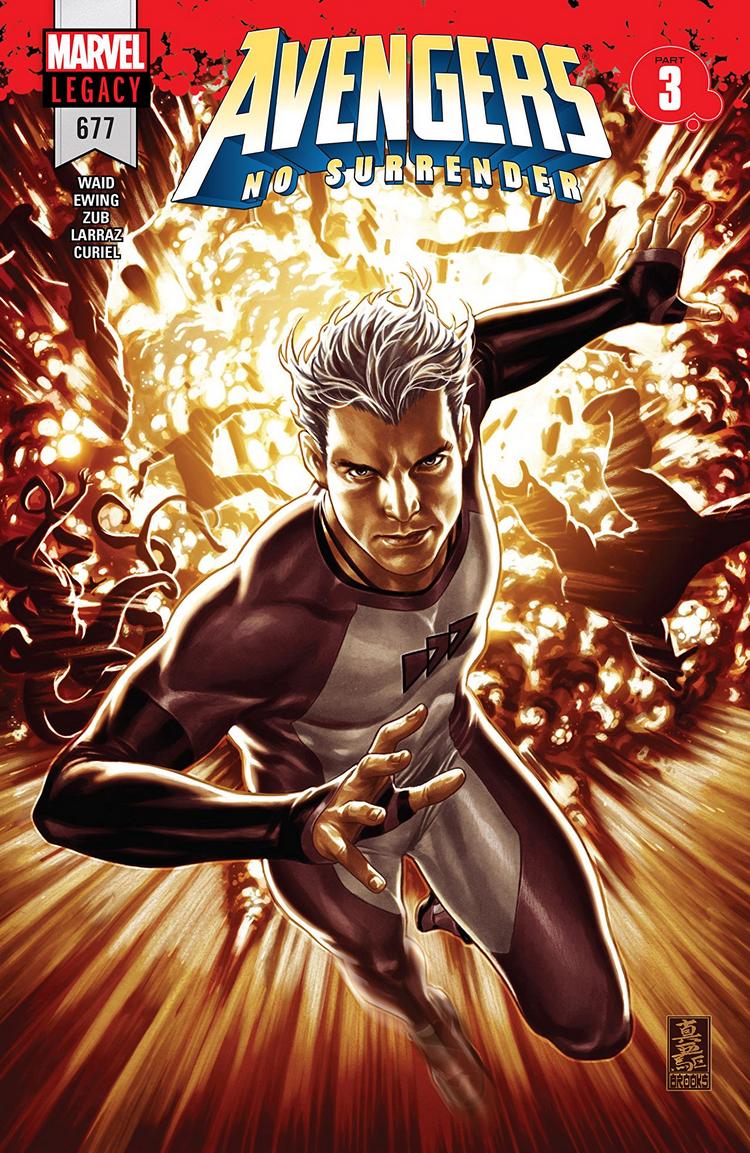 “We are the Avengers! We do not play defense!”

Quicksilver leaps to the front as our point-of-view character in Avengers #677, eager to prove himself (again) as an Avenger. Mercifully, the writing crew of Al Ewing, Mark Waid, and Jim Zub slow down Pietro’s monologue for us soitdoesn’treadasonelongwordeventhoughitprobablycouldand/orshould. Or not. Instead, Quicksilver’s thoughts are just as measured as any other character, giving the reader no real sense of a mind moving faster than the world around him. Except, as the writers remind us, Quicksilver himself is quick to remind us that he is, indeed, the fastest brain in the room, the one who can save the day, because, after all, the Avengers need him more than he needs them.

When that monologue switches gears to dialog and interaction, letterer Cory Petit follows artist Pepe Larraz’s lead and peppers the page with word balloons, tracking them to the “ghost images” of Quicksilver as he whizzes through the panels.

Avengers history continues to remain central to the story as (retconned?) bits between panels and pages, issues and events continue to be tweaked and modified. Avengers #677 shows readers the auxiliary Avengers Headquarters, Voyager continues to play a role in the story, and the team takes on trouble beyond the borders of any one country, as the mystery of the stasis-frozen Avengers begins to crystallize. The scope of the “No Surrender” adventure stretches beyond the team, as the Avengers assemble and join the fight, splitting to two fronts: Rome, Italy and Cusco, Peru. Just like a classic Avengers tale.

Avengers #677 gives readers more with the Black Order and the Lethal Legion as one of the controlling forces (depicted in booming voiceover in the previous issue) is revealed, while the other begins to slowly inch out of the shadows.

Through it all, David Curiel underscores the uncertainty and frantic aspects of the story with a warm-to-hot color palette, influenced and augmented by explosions and energy emissions. When blue or green does creep into the tale, those panels are a visual relief, resetting the intense heat of the other scenes in Avengers #677, and giving the reader a chance to gasp. Curiel’s collaboration with Larraz winds up being a sample of perfection, nearly impossible to discern where one ends and the other begins. The end result is a beautiful story filled with energy and excitement.

Newly-minted as one of Marvel’s Young Guns, Larraz shows readers how he earned that distinction with slick, buoyant artwork filled with detail, like Quicksilver’s slightly-longer shirt sleeves (like a runner’s warm-up top) and Falcon stroking Redwing’s feathers while talking to the group without distorting the story flow. Larraz isn’t limited to character detail or story nuance, however, as he fills the auxiliary headquarters with tech and grit, shifts camera angle for dynamic effect, and structures pages to pack as much action as possible into Avengers #677.

Bigscreen fight scenes take up two-thirds to five-sixths of the page vertically, but Larraz is masterful enough to punctuate those scenes with smaller panels that highlight emotion, reaction, or environment, sometimes spotlighting characters from the larger conflict. Those smaller panels retain widescreen proportions, and give Larraz more opportunity to showcase his craft, which collaborators Curiel and Petit seize upon as well.

Another issue in the “No Surrender” tale, another cliffhanger. This is what Avengers and event comics should be. I’ve had almost seventy pages of Avengers comics this year already, but I want more. This is a fun superheroic, universe-saving saga in the making.