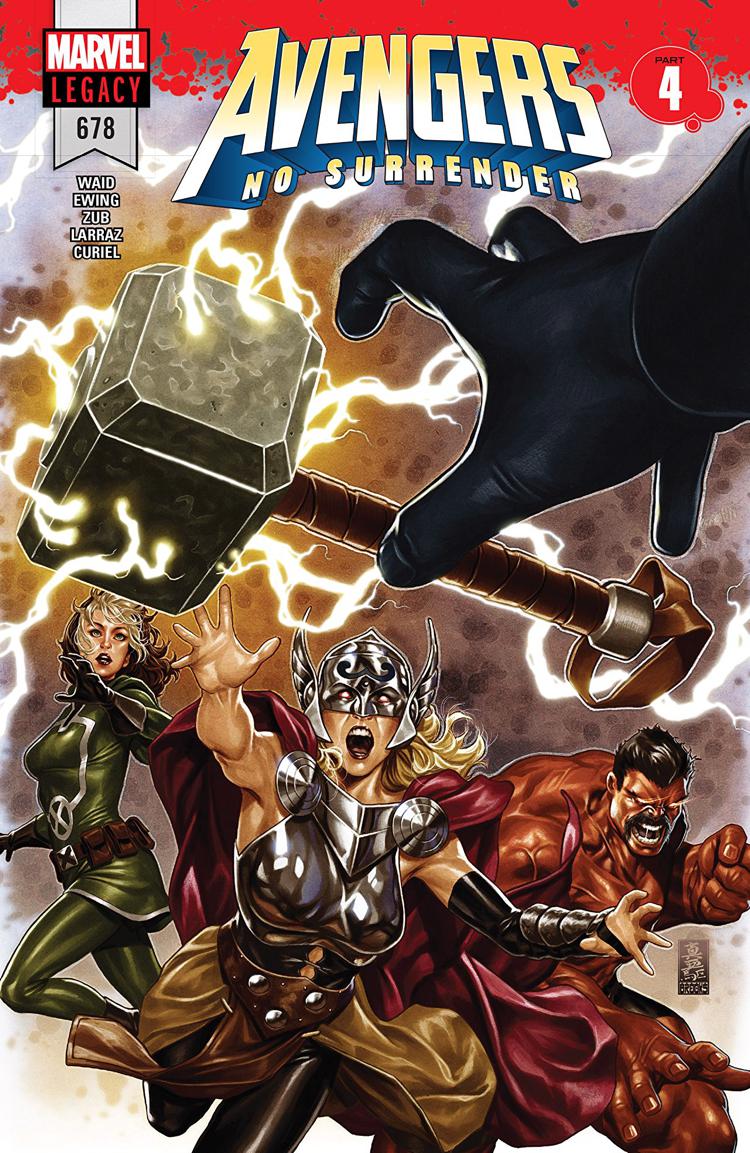 Wonder Man sets the tone with that quote, bellowed during the Peru portion of the battle filling the pages of Avengers #678. Written by the titanic trio of Al Ewing, Jim Zub, and Mark Waid, this issue delivers the outcome of the fight between the Black Order and the Lethal Legion, or as Human Torch refers to them collectively, the “Black-Legion-Order-League”. That combat notches the first victory, which propels the other quarters toward the next rounds.

Readers know the two teams are fighting under the auspices of the Grandmaster and a somewhat shadowy foe who has been dubbed “The Challenger.” Most likely, this Challenger is a newer character, not a legacy character of the 1940s character from Timely. Honestly, though, that thread is a subplot behind the aforementioned rumble between bad guys and the multiple mysteries of Voyager, the frozen Avengers, and where the Earth really is.

The Human Torch takes over the point of view (the fourth male lead out of four, which is worth noting given that this Avengers mega-roster has sixteen members, six of them being female) and makes all the expected Avengers–Fantastic Four comparisons. He also leads the charge against the known foes, despite the presence of so very much unknown.

Artist Pepe Larraz opens the issue with a simple four-panel page that starts close in on Johnny Storm, but pulls out for a widescreen “FLAME ON!” before the turn is due. From there, Larraz continues to deliver amazingly brilliant art, detailed, but deceptively simple, animated and action-oriented, and just all around nifty. Torch’s charge into battle winds up in a page that pits a half-dozen Black-Legion-Order-League against each other while a handful of Avengers look on in a composition that would, undoubtedly, bring a smile to the face of comic book’s most detailed disciplinarian – George Pérez.

And that (once more, in case you haven’t been keeping up with my series of reviews for “No Surrender”) is where this really succeeds as an Avengers story. The detail transmits the scope, the scope demands heroics, the heroics come in beautiful imagery peppered with satisfying character bits and equally amusing dialog. Torch narrates the beginning and the end of the issue, as has been the pattern for this series. Avengers #678 has a beginning and an ending, but it doesn’t tuck everything in and trim off the rough edges. This tale isn’t over, not by a long shot.

Rogue edges past Torch for the most panels, beating the founding member of the Fantastic Four out by one spot. Larraz clearly has fun drawing the X-Men’s Southern belle badass. She doesn’t fight much this issue, but she’s integral to the pacing and the plot (for my 2¢, I suspect she’ll be our POV next issue). Her green garb is a nice refresher from the blazing oranges and bright blue flame blue hues of this issue, like an oasis on a stark horizon. Colorist David Curiel brings a bold collection of colors to this issue, as Avengers deserve. He also paints in the textures, particularly of note in the near-vertigo-inducing Rome, Italy intro page, as the reader looks down upon a fallen (not dead) Avenger over the shoulders of the Lethal Legion.

Per usual, letterer Cory Petit is on point. The page mentioned above is a fine example of the power of lettering, and exactly where to place each period. Petit’s dialog could be strip-mined for a drama class reading warm-up, as he packs emphasis in the battle chatter, and emotion underneath it all. Lots of sound effects are scattered throughout this issue. Some may be the work of Larraz, but most of them have to be attributed to Petit, as none of the fights-within-fights are quiet. The variety of dialects communicated through different font styles is tremendous, really giving readers a chance to imagine Avengers #678 with an all-star cast of individuals.

In Avengers #678, readers are reminded that the Avengers don’t just happen upon trouble and cobble together a crew, but the represent one of the most storied and responsible entities in the Marvel Universe. Zub, Waid, and Ewing present the Avengers rules of engagement as well as Avengers Rule Number One (Save Lives) and keep the team, despite being in three factions, stitched together from cover to cover.

“No Surrender” is a fun event that pulls inspiration from Avengers tales old and new, retconned and reimagined. There are obvious influences from the Marvel Cinematic Universe, as well as new bits, specifically crafted to be grafted onto Avengers lore. I’m loving the heck out of this story, and with ninety strong pages of Larraz-Curiel-Petit work done; I’m stoked to see what the next few chapters bring.