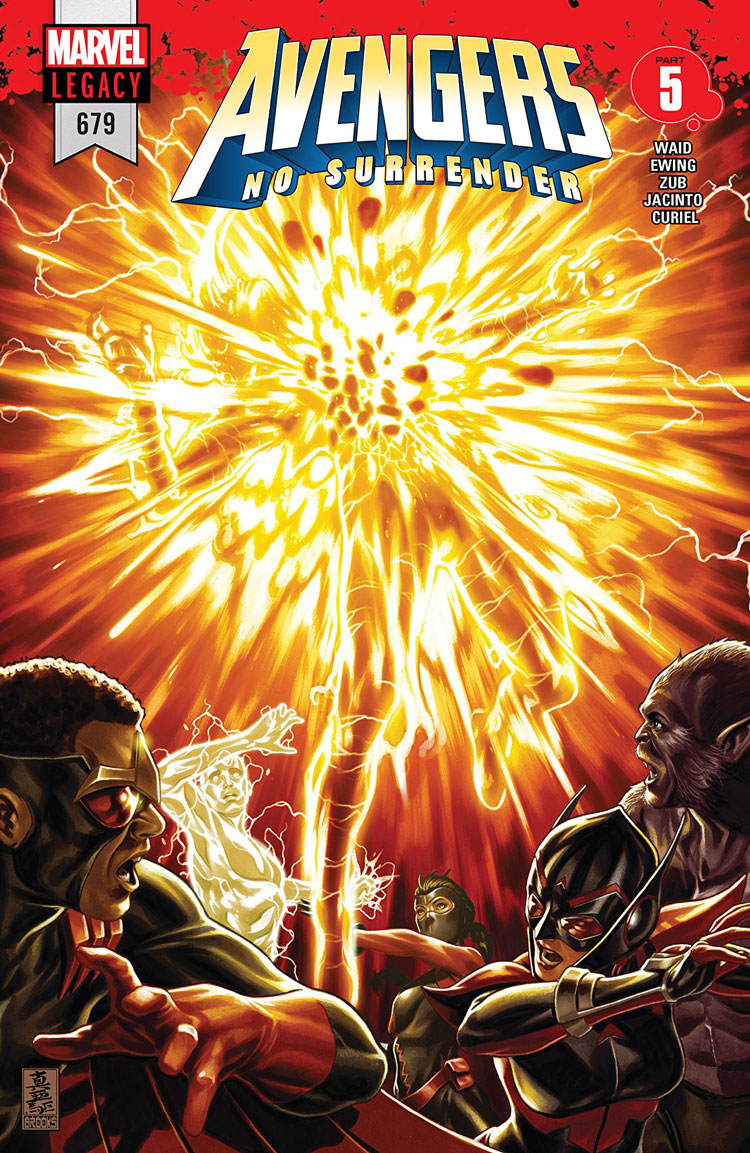 No, that’s not the first line of Avengers #679, nor does an Avenger speak it.

The mysterious Challenger is the one who says that, and also the point of view character for what is, essentially, a transitional issue in the “No Surrender” storyline.

The fifth installment of the weekly “No Surrender” Avengers epic, Avengers #679 brings in Kim Jacinto onboard to relieve Pepe Larraz for the artwork, but the rest of the creative crew remains the same. The work of writing trio Al Ewing, Jim Zub, and Mark Waid, color artist David Curiel, and letterer Cory Petit are all present under the wonderful Mark Brooks cover.

As you may have surmised from the lead-in to this review, Avengers #679 brings readers the much-anticipated backstory of the Challenger – and his creation in the text piece, courtesy of Pep Larraz – through the character’s own recollections. As such, the Challenger and his opponent, the Grandmaster, are the focus of the issue, with the Challenger claiming the most panels in this comic – nearly three times that of the top Avenger (Lightning, for those keeping score at home).

The change in focus is a nice breather for us readers, with minimal skirmishes and a chance for characters to react to the events they’ve experienced. More importantly, it sheds light on the predicament the Avengers – more properly the Earth – are in and provides an effective “reset” for the next stage.

Mind you, the story doesn’t reset, but the conflicting forces of the Black Order and the Lethal Legion are temporarily removed, giving the Avengers space to survey the damage. Waid, Zub, and Ewing pour a lot of work into constructing the Challenger’s history and personality, but by the end of the issue, Challenger is a familiar foe, one the Avengers and only the Avengers can challenge, and one that surely has history in the Marvel Universe.

Even in this quieter issue, the writing trio leaves us with a suspenseful ending and a couple dangling subplots, hooking us for a return in seven days.

Jacinto’s art has similar construction and storytelling sensibilities to Larraz’s, but Jacinto adds more line to his characters. With hatching and crosshatching not unlike the work of Leinil Francis Yu, Jacinto’s characters appear a little less animated, a little more worn, but no less impactful. Jacinto opts for widescreen panel layouts that make sense, vertical panels for more intimate/less dynamic moments, and two-thirds splash pages that maximize the amount of story on a page while delivering significant visual impact.

Curiel adapts nicely to Jacinto’s work, a little heavily in the opening scene, really only on the Grandmaster. By the end of the issue, Curiel is as locked into coloring Jacinto’s work as he was Larraz’s throughout the opening four chapters of “No Surrender.” Jacinto appears to leave a few more backgrounds up to Curiel, which works out just fine, as the most notable open occurrence is in the scene where Lightning updates Rogue on the events readers saw last issue. The emotional resonance of that scene almost explodes in the background, and certainly seasons the tale.

Petit opts for orange on warm, dark grey for the Challengers caption boxes. That color combo effectively dodges all present Avengers uniforms and steps up as different from what we’ve seen for the other point-of-view characters in earlier chapters.

Avengers #679 offers a glimmer of hope for the apparent casualty from last issue. It also adds more history to the Marvel Universe, while borrowing bits from Marvel properties in other arenas (notably the Marvel Cinematic Universe and the Marvel Contest of Champions game). This issue is a pivot point. Zub, Ewing, and Waid can go just about anywhere from here. They can make adjustments to the tale, the roster of characters, or the pacing. As evidenced by the “No Surrender” chapters up to an including this one, it’ll work, whatever “it” is.

Some of the “it” may include further investigation to “Avengers Fever” or “Avengers World.” It may involve the shadowed figure asking for help at the end of Avengers #679, or it might be the mentor-student relationship Beast and Nadia are developing as they try to nurse Jarvis back to health. Whatever it is, this comic has it. Jacinto is a nice exchange for Larraz in a story that has intrigue, adventure, and fun – everything an Avengers epic needs.