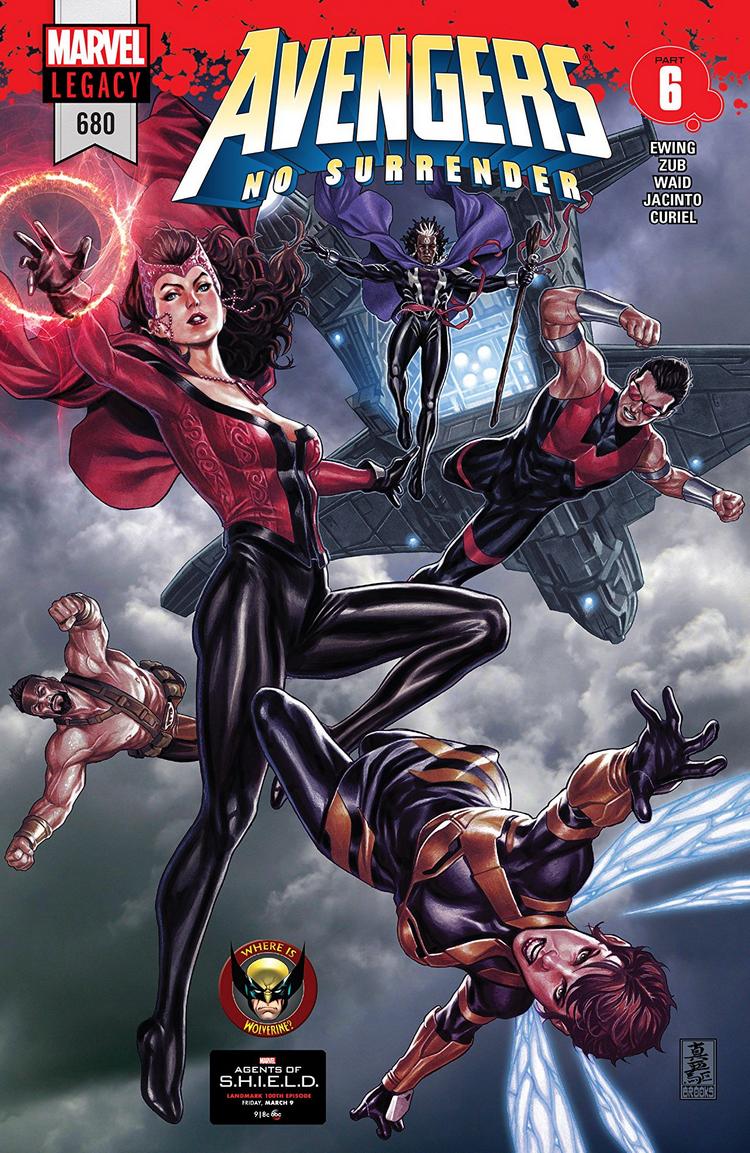 “It’s about saving the people we love.”

That might be Simon Williams’ greatest contribution to the “No Surrender” storyline, even though he has been featured before in my reviews of this story. Clearly, one (or more) of the trio of writers of Jim Zub, Al Ewing, and Mark Waid has a soft spot and a solid understanding of Wonder Man, and I hope that writer gets a chance to use him more often on the other side of “No Surrender.”

As Avengers #680 opens up, the team is rocked by the loss of the fallen Avenger from chapter five of this saga, and Rogue spins into the point-of-view spotlight. In this issue written by the aforementioned trio and drawn by Kim Jacinto, colored by David Curiel, and lettered by Cory Petit, Rogue also notches the most panels and thus the first Avenger to land leading totals in “No Surrender”.

As readers step into Rogue’s thoughts, the story gets dark, and the team lashes out. Rogue’s done taking and ready to start giving, and the Avengers do just that in this issue, giving Rogue a chance to showcase her powers, disposition, and limits. Voyager (the once-lost now-found founding member of the Avengers) gets to join in the battle as well, no longer simply filling panels as MacGuffin and human transportation device.

And a couple times, due to extreme close-ups, I had to pause and decipher if I was looking at Rogue or Voyager. Jacinto draws both women similarly in the face, but Rogue’s hair is a little more mussed. As head-to-toe figures, however, there is less in common, as Rogue is clearly the taller of the two.

For the most part, Jacinto’s work falls a bit between Mahmud Asrar and Olivier Coipel, but his figures feel more gestural than those of either artist. His general page compositions follow in line with what Larraz started for the “No Surrender” arc, but Jacinto leans a bit more heavily into rubble and clouds. In some spots, the location simply becomes as non-descript as non-descript can be, thank you, Cory Petit for the location tag of the Antarctic. Granted, there’s not a lot of landmarks of interest in the Antarctic, but a couple of the panels could easily be set at Stonehenge or Detroit.

Jacinto’s greatest strengths in figures is in expressions, and this story supplies plenty of opportunity for that to shine through.

Curiel dials the brightness up a notch. As mentioned, the story takes a dark turn. Jacinto spots a few more solid black areas than Larraz might have, which requires a coloring booster shot to elevate the visuals. Sometimes those visual boosts are just patterned or filtered colors, but in those instances, Curiel only does so to accentuate the mood.

As issues of “No Surrender” go, this one has a more brisk pace, despite a couple slow-moving scenes that consume multiple pages. Falcon calls the Pyramoids what they are: MacGuffins as two more materialize in the Antarctic and Los Alamos, a swath of Avengers arrive to assist, two of the Black Order fall in the ongoing game between the Challenger and the Grandmaster and the ending leaves us hanging a bit, looking towards the next issue, despite the trio of post-finale scenes.

It’s a bit like the Marvel cinematic experience at this point, as there’s a “post-credits” Logan scene with the one-time (and future?) Wolverine sliding into the story, following the final page and “The Assembly” text piece.

All in all, this is a pretty packed issue, but it’s also the least satisfying of “No Surrender” to this point. It’s not bad, mind you, it’s just murky. And dark. Did I mention this is a dark issue?