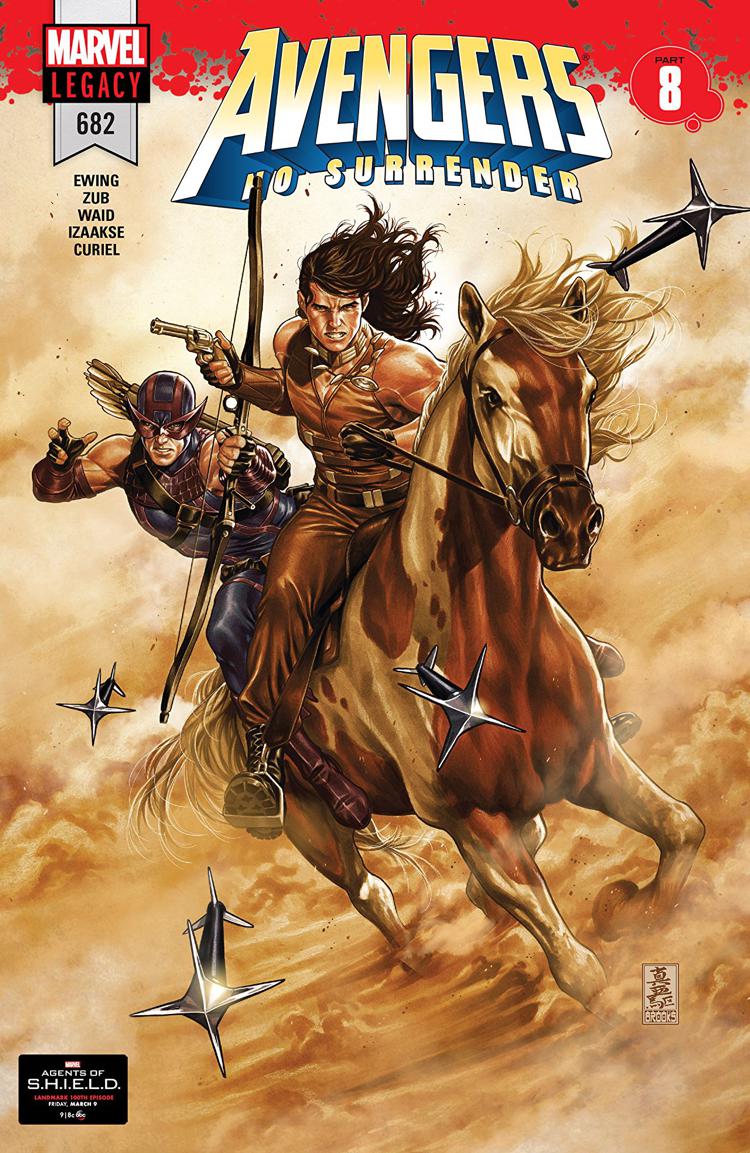 “You cannot take the path until you see it.”

All competitors have suffered losses, but that doesn’t stop the deadly game between the Grandmaster and the Challenger in Avengers #682, written by Al Ewing, Jim Zub, and Mark Waid. Sean Izaakse joins the team on art, with David Curiel and Cory Petit locking down the visuals on colors and letters.

The eighth chapter of “No Surrender” puts a few more pieces on the game board, as Hawkeye (resplendent in his classic purple togs) and Red Wolf join the cast. Avengers and members of the Lethal Legion fight for the New Mexico Pyramoid, while Rogue’s team attempt to return from Antarctica.

Red Wolf lands the narration gig, the leading panel spot, and the quote of the review for Avengers #682. His quote is a quote given to him in story, shared now with you. It also bridges Red Wolf’s continuity and leads to a great scene he shares with Hawkeye. It’s rare we get character moments, particularly between male teammates that reveal who they are and what they think of each other beyond hi-fives or jokes, especially during an event such as “No Surrender”. The writing trio of Avengers #682 give us a nice bit of revelation for a character that got short shrift in his own recent solo series.

Red Wolf is, without question, the heroic lead of this issue, but the trio also affords Jarvis some time and, as we wade deeper into this saga, Grandmaster and Challenger get more panel time, dialog, and interplay.

Izaaske’s first issue has quite a bit going on, giving him a range of characters and locales to play with. He does a brilliant bit of page turning magic to open the issue that I’d really like to see more of, in this story, this series, heck in comics in general. Red Wolf is a good fit for Izaakse, as is the Avenging Archer – Hawkeye. Izaaske’s work is a bit more line heavy than Jacinto’s was in the previous issue, and not quite as animated as Larraz, but effective all the same. In the cosmic scenes, I see a bit of Ron Lim influence, which is exactly the type of influence Marvel cosmic should mine.

Curiel and Petit are magnificent mortar for the “No Surrender” storyline, as their work is consistent throughout the eight chapters to date. That minimizes the shellshock from Avengers issue to Avengers issue, but also speaks volumes about their craft and confidence.

Curiel has a little more latitude to play with this issue as the Red Wolf flashback dips into the western frontier in the 1870s, so the color palette and surface treatment can be a little more rough and fun. In the present day, Hawkeye’s purple is a delight, giving readers more Avengery awesomeness simply by being purple. It’s nice to see costumed heroes in costume, rather than the all-too-serious leather duds as prescribed by feature films. And what’s the complimentary color for purple? Go ahead, Google it. Yeah. There’s a bunch of that color in this comic too.

Petit brings the sublime lettering to bear once more. The Old West standoff is two men and a conversation, and the lettering treatment alone defines the action and the attitudes. Like Curiel, however, Petit does stretch more into the bold direction once he returns to present day storytelling, with exclamations pressing the boundaries of word balloons.

I generally don’t like to use profanity in my reviews of comics, but I darn near made an exception for the “Oh, S#!T!” moment that ends Avengers #682. This is what folks mean when they refer to “a game changer.” It’s not so much a cliffhanger as it is a teaser. If you’ve been reading Marvel news on the internet, you might be able to math this out yourself, but if not, well, you’re in for a treat, which will only ratchet higher in intensity reflective of your own passion for the Avengers. “No Surrender” is really clicking into place. Grandmaster and Challenger are entering the closing stages of their face-off, and we’re all right there to see it play out. I’m so glad this is a weekly story.