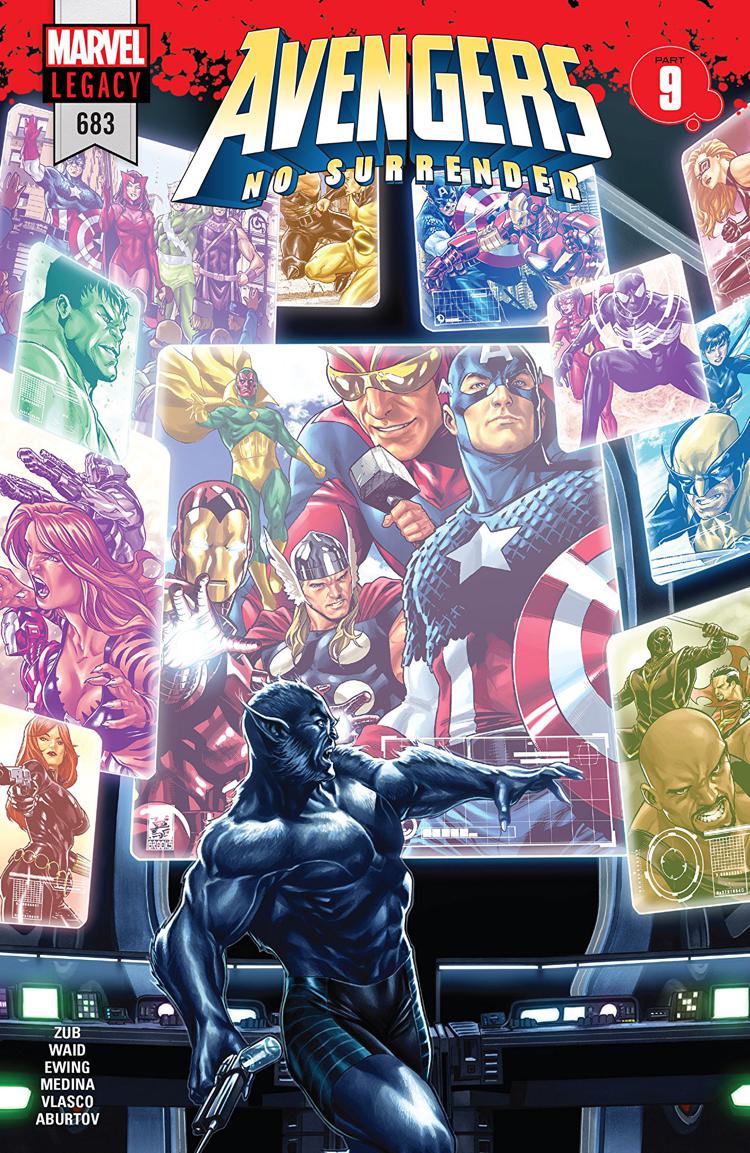 “He taught me better than that.”

Words of inspiration, spoken by Nadia (Wasp) Pym, as the fifth Pyramoid comes into play and forces the Avengers – Wasp and Beast – into the fray and away from their charge, Edwin Jarvis. Thanks to the writing trio of Jim Zub, Mark Waid, and Al Ewing, Jarvis has been bedridden for the past eight chapters of “No Surrender,” but this issue spends more time getting behind Jarvis’ malady and reveals his true role with the Avengers.

Unlike many other comics, I cannot pinpoint my first issue of the Avengers, but I can tell you it is the one team comic I return to more than any other. I may not have every issue, but that never stops me from picking up an issue, giving it a read, and remembering what Avengers meant to me when I did first find them.

I can, however, assure you that the first encounter I had with the Avengers included Hank McCoy, which was well before my X-Men immersion, thus the bounding blue furball will always be an Avenger first to me, despite being one of my favorite X-Men.

That multiplies the joy of Avengers #683 for me, as Beast takes the point of view role, and secures the Most Panels Prize for this issue. The writers treat Hank well, giving him a balance of heart and mind, with caption boxes that challenge letterer Cory Petit. Petit decorates the page appropriately, sparing the art as much as possible, but positioning the boxes for optimal reading flow. Petit remains on hand to keep the throughline of lettering, but the other visual collaborators experience a lineup change worthy of the Avengers.

An inker joins the creative crew with Avengers #683. Juan Vlasco enters “No Surrender” alongside this issue’s penciler, Paco Medina, and the two bring their level best. Medina is on par with Larraz, but the luxury of Vlasco inking him coupled with the setting of a hospital gives Medina the latitude to commit more details to the page, like hand sanitizer distribution pumps outside each room, rounded edge nightstands, and a wonderful array of bystanders that aren’t simply copy-pasted and colored differently.

Speaking of colors, Jesus Aburtov replaces David Curiel on colors (tune in next week to learn if this switch is for one issue or more). Aburtov is given the chance to shade a vivid flashback sequence of Avengers’ glory days, and captures the nostalgia magnificently. The modern day bits are solid as well, and Aburtov leverages the primary color trio (red, blue, and yellow) to great effect, given the prominent Avengers in this issue are Wasp, Beast, and Voyager.

Zub, Waid, and Ewing show that the Avengers are not defined by roster depth, but by the passion of those on the roster. Nadia isn’t Janet Van Dyne, and that is absolutely wonderful. Nadia brings charm and confidence, like Jan, but her confidence is clearly outshined by her exuberance. Beast is bounding as always, and Jarvis’ role is critical to this issue and the future developments of “No Surrender”.

This issue has a tight focus on three Avengers that nicely cover the entire span of Earth’s Mightiest Heroes’ history and is definitely a pivot point in “No Surrender”. The revelations and outcomes of this issue are going to be impactful to the rest of the tale, and the presentation here makes Avengers #683 one of the most impactful chapters of this saga.

A colleague in comic book commentary noted that “No Surrender” is a video game in comic form. He’s not wrong, but games inspire comics and comics inspire games. Nothing in this day and age is crafted in a vacuum, especially with brand recognition like the Avengers. And that’s the beauty of this single-title-contained event. It’s not limited to one source of inspiration any more than the Avengers are limited by one defined roster. This is a comic story that lends itself to be more, and if comics could launch merchandise today (Original Secret Wars anyone?) this “No Surrender” would be powering out wave three or four right about now.