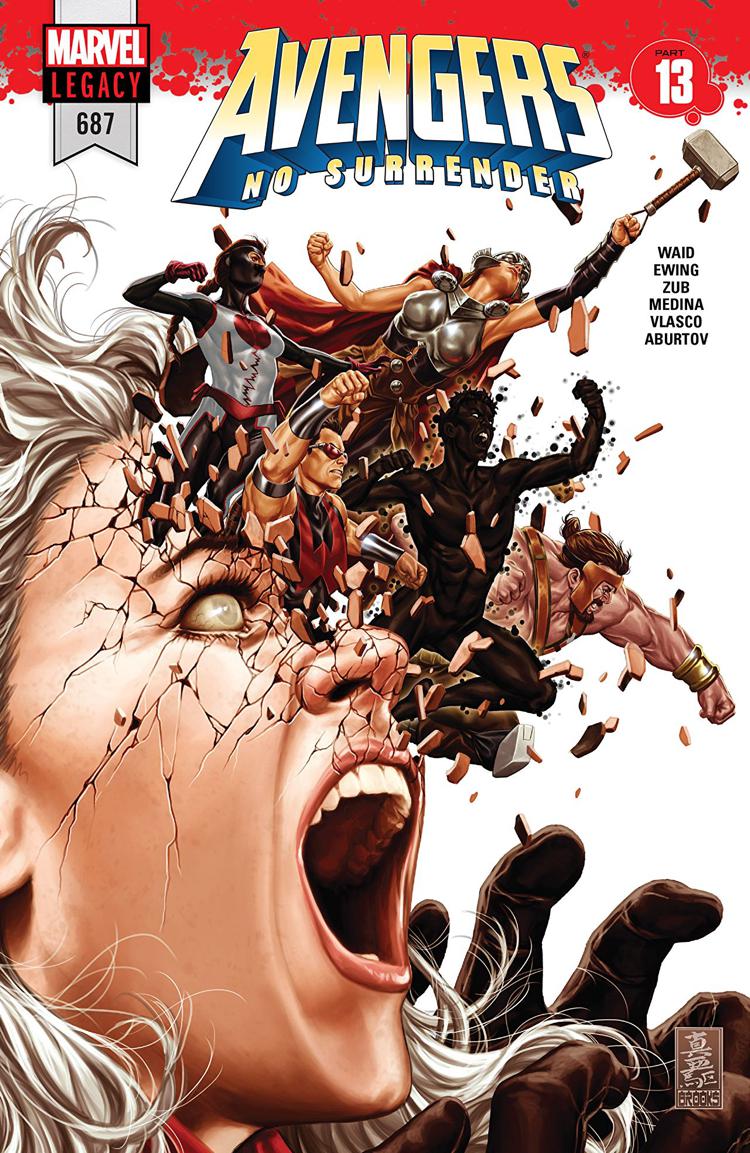 “She’s lingering in my mind like a lucid dream.”

Janet Van Dyne – the original Wasp – takes the point of view for Chapter 13 of “No Surrender” in bright yellow text on black caption boxes to match her outfit. Cory Petit has done a solid job matching caption to character, and Avengers #687 is no exception.

For their part, the colorist duo of Jesus Aburtov and Federico Blee help maintain identities with subtle tones, as evidenced in the double-page spread depicting eleven characters. Rogue, Scarlet Witch and Wasp all have brown hair, but the variance in tone is worth noting, as it helps define the visual cues for each of the Avengers almost as much as their physiques as depicted by penciler Paco Medina. Further illustrating the point, Wasp and Voyager both wear yellow and black uniforms, but the yellows are just a few shades off enough to help distinguish the two.

Medina does a solid job throughout this issue, filling Avengers #687 with animated characters and detailed settings. Rare is the occasion where the two don’t flawlessly blend, however, and such is the case on the aforementioned spread, as some of the characters seem placed onto the background, like Colorforms or stickers. Inker Juan Vlasco and the coloring tandem could have done a bit more to lock the figures down, but the figures are the focus, and they still come across as such, regardless of their attachment points.

That’s a minor nit to pick and one of very few flaws in this issue, or even the “No Surrender” series to this point. Medina, Vlasco, Aburtov, and Blee fill this comic with rich imagery, and wild, wonderful effects. Vlasco uses ink splatters to great effect, giving characters battle-damaged appearances without unnecessarily painting them with blood. Red is reserved for uniforms and through those uniforms story punctuation. The quartet breaks out the Kirby Krackle, which is only appropriate for a cosmically-charged adventure like this.

Writers Jim Zub, Mark Waid, and Al Ewing give readers a bit of a break and do a round-robin check-in with many of the players in this saga. Not every character is given a chance to chat, however, as this issue includes 28 Avengers. Grandmaster and the Challenger are not included in that tally, as Bruce Banner takes the lead for most panels, followed closely by Voyager and Jarvis.

The subplots in “No Surrender” were less stories in and of themselves and more consequence of the main tale, but in this issue, the writing trio pull out a couple threads to seed stories that have been solicited in titles other than Avengers.

Avengers #687 relies on recharging, checking in, and adjusting. Janet Van Dyne steps up and reminds readers why she is one of the most beloved Avengers and just how confident a character she is. Her conversation with Voyager makes sense, feels right, and gives readers a chance to look at this wide assemblage of costumed characters as a real team once again. With the pause in fisticuffs and explosions, Avengers #687 feels like a huge gasp before the final sprint in the “No Surrender” marathon. The finish line is in sight. Now it’s time to really pour it on.