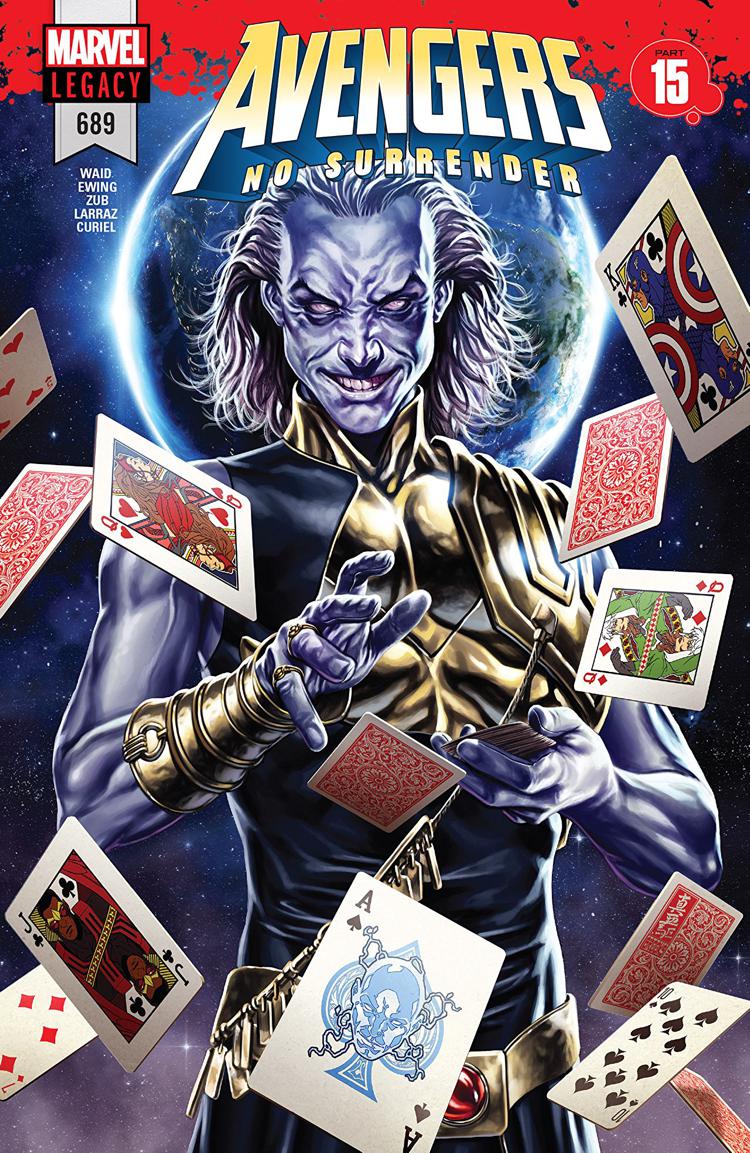 And assemble they do, for this is a day unlike any other. The penultimate chapter of “No Surrender” opens with a pre-credits action sequence that would take movie magicians months to create and millions to fund that creation. For Pepe Larraz, it’s a few beautiful, smooth pages that spans the Marvel Universe beyond the Avengers’ roster before transporting readers to the Grandmaster’s Cosmic Game Room.

While that sounds a lot like a possible pitch for the next event in the Contest of Champions mobile game, this is Avengers #689. The game is busted – the Challenger is wreaking havoc on Earth and the Grandmaster continues to tinker with the Avengers as though they were second-hand action figures.

Larraz’s lines have a deceptively simple quality about them, not unlike Michael Golden or Carlos Pacheco. The pages of Avengers #689 are packed with details, but the figures are not burdened by lines. Larraz uses negative space and gestalt to pack depth and detail, emotion and motion into the pages of Avengers. Larraz packs so much into the page, this reader couldn’t help but be convinced it must be effortless – or joyful – to be so extravagant. I know better. I’ve seen Larraz’s work in person recently at C2E2, and “simple” is darn near an insult. Joyful pretty well fits though, as he manages to infuse his figures with life quite nicely. His style is well-crafted and wonderfully executed, making what appears to be easy work for colorist David Curiel.

For his part, Curiel appears to drain the printers’ inkwells and leaves virtually no color unused in this thirty-page installment of “No Surrender” that checks in with not only the aforementioned Avengers, but the Champions, Alpha Flight, the X-Men, and a bunch of heroes (both the ones for hire and the ones who are heroic because it’s the right thing to do). That said, Curiel brings climate to every panel, from the red-hot explosiveness of Challenger’s fury to the cold vastness beyond the Grandmaster’s Game Room.

The story itself is a straight-shooting super-team divide-and-conquer caper as twenty Avengers split their efforts between the machinations of Grandmaster and mess caused by Challenger. Lightning provides spot narration throughout the issue, making for a nice bookend fifteen issues after he came back into the Avengers fold courtesy of writers Mark Waid, Al Ewing, and Jim Zub.

Not only does Lightning provide the narration when the Avengers’ dialog needs a break or a boost, but he also locks down the most panels in this issue, and really makes a case for future considerations by doing so.

Twenty Avengers and a dozen more characters all in one comic seems like a recipe for forsaken or forgotten characters, but everyone has a moment to shine, if even for just a panel. The collaboration among the creative team is clear from cover to cover, with the writers clearly drawing inspiration from Larraz as much as he is drawing their inspirations.

“No Surrender” has been a widescreen epic since the first panel. The creative team figured out a way to highlight some lesser-known Avengers, but managed to keep the tale epic in scope and severe in consequence. Over the course of the saga, they expanded the Marvel Universe with a few new characters, and gave us a story that could have easily been a free-standing event. Avengers #689 wraps up the conflict, and returns normalcy to the Marvel Universe – at least as normal as it was in Avengers #675, when this all started. There’s one more chapter, however, one more week before this saga wraps up, and you better believe I’m going to be there.