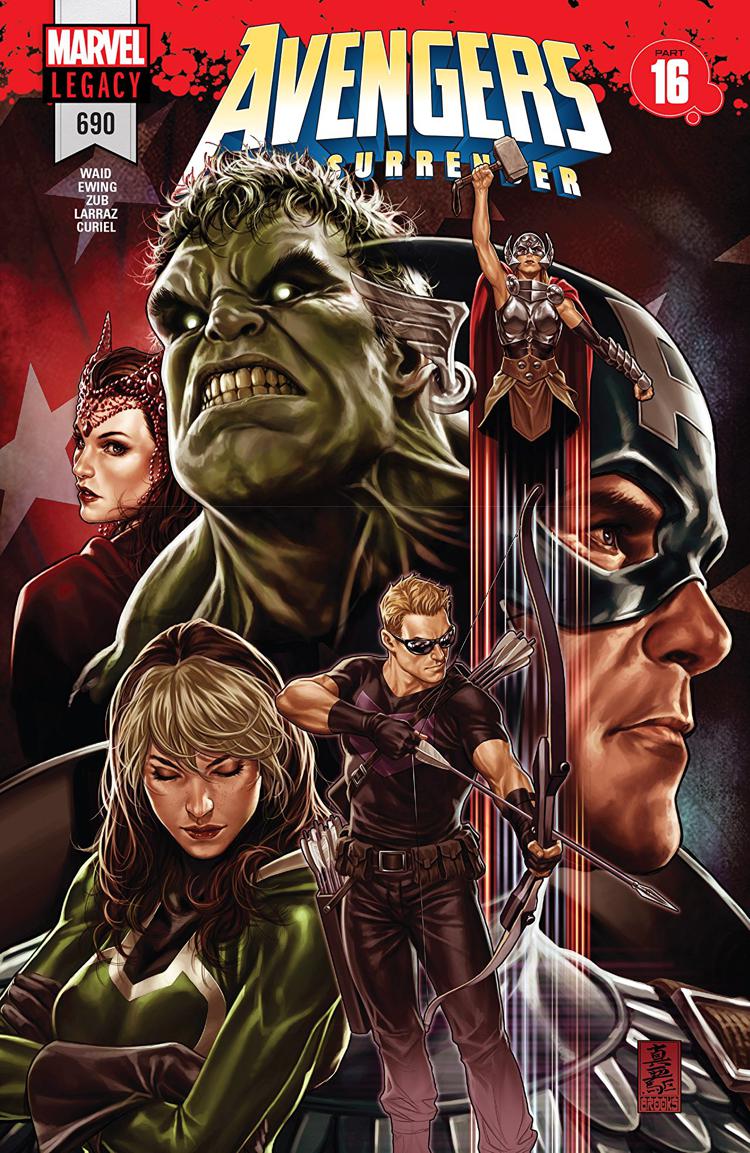 “I have seen these proud men and women victorious time and again, but this. . .this has been their greatest triumph.”

Edwin Jarvis gets a chance to narrate, but Roberto da Costa – Citizen V or Sunspot – lands the most panels in this comic, barely nudging out Jarvis to do so. Both characters have significant roles to play in this finale for “No Surrender.”

No punches are thrown, but that does not keep Avengers #690 from being a true Avengers comic book. There’s a lot of what makes the Avengers such a fan favorite franchise: characters from across the Marvel Universe; the anxiety of rebuilding; the promise of hope; and the vow to meet any threat head-on. Writers Mark Waid, Al Ewing, and Jim Zub have given us a wild, fun, video-game-like adventure throughout “No Surrender”, but this issue really lets them dig into the characters that call themselves Avengers and their relationships with one another.

The writing trio set up no fewer than six storylines, and actively launch two titles from this issue with a handful of plots ready for the next Avengers series to harvest. Beyond that, though, the writers give Beast and Wonder Man, Nadia Pym and Edwin Jarvis, Rogue and Human Torch, Captain America and Falcon all moments to be who they are, to grow how they are, and to put a smile or a half-dozen smiles on readers’ faces. This feels like an Avengers story, the type of tale that may not ever make a “Best Of” collection or top ten list, but will, undoubtedly, be an issue fans return to for a quick Avengers fix. Sometimes the quieter issues are the most striking, and that is certainly the case with Avengers #690.

I would be hideously remiss to mention this book is “striking” and not include the visuals in that label. Pep Larraz’s work in Avengers #690 is gorgeous as always, but given an extra notch to ratchet up as he is able to fill the pages with characters and set them on the backdrop of rubble. No one does rubble quite like the Master of Rubble, George Pérez, but I have a feeling Pérez would look at Larraz’s rubble and smile.

For every pebble or plank Larraz details in the rubble, his work is magnificently more impactful in the characters. The opening page alone is a master’s class on physiques and body language – and it’s only four panels! Janet Van Dyne Wasp, Beast, Jarvis, and Wonder Man visit Avengers’ Mansion for the first time since this all began, and I would have paid the same cover price for a full issue of just those four characters in that one setting for the entire story.

Larraz doesn’t stop there, though, as he updates the Founders Statue at the conclusion of an issue that contains twenty-one Avengers. Obviously, Larraz gets a little help in this story. David Curiel pops in one more time to color, well, everything. Earthtones and construction warehouse shades for the rubble, brilliant, invigorating colors for the heroes, and sharp hues for the civilian attire. The duo work magnificently well together, and the single panel of the bridge in Central Park is a solid testimony to what a well-matched pair of creators is fully capable of doing. Lighting and effects pepper the course of Avengers #690, rounding out the wonder in this comic.

Cory Petit brings lettering magic to life once again. Fewer punches means an uptick in conversations, and Petit does a brilliant job of collaborating into Larraz’s art. The lettering stitches panels together in some spots, giving Larraz a brilliant assist in transitioning between groups of Avengers.

Avengers #690 includes a tight epilogue that looks past the big Avengers event of the week (it is April 29 as I type this) to look at NEXT week’s Avengers hotness: Avengers #1 by Jason Aaron and Ed McGuinness. I’m looking forward to the widescreen adventures as much as anyone, but “No Surrender” set the bar pretty darn high and gave me a story that I have enjoyed nearly as much as some of the more classic Avengers tales.