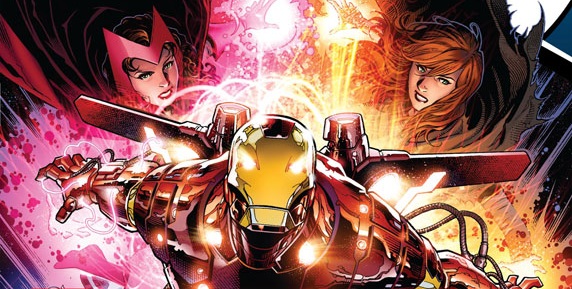 And so it ends…I’ll admit I was preparing myself for the series to end with a whimper, but Jason Aaron delivered once again with an issue full of explosions, heart, and interesting moments to kick Marvel NOW! off with a bang.

Aaron, Bendis, Hickman, Fraction & Brubaker started this event with a mammoth task in front of them: stir up the Marvel U, pit heroes against heroes, stretch the tale out over 12 issues, alternate writing duties, and make it matter like never before. Not an easy task, and, on the whole, I would say they succeeded in their mission. I enjoyed the series, and, at the end of the day, the comics entertained me. I’m not sure I can really ask for more than that.

With issue #12 in particular, Jason Aaron has to bring a whole lot of crazy to end and he does that very well. Aaron’s voice has been strong in this series and his issues have stood out as being some of the best written of the bunch. Issue #12 is no exception, and Aaron does a great job with the principal characters in this conflict. He gets Hope, he understands where she is coming from and what her role is in all of this, and he does an excellent job giving her the moment we’ve been waiting for from the character. He also provides some excellent moments for the Scarlet Witch, righting a wrong blew up the Marvel Universe a few years back and setting the stage for an extremely interesting Marvel U going forward. Rest assured, the consequences of this series are far from over, and Aaron does a superb job of ending the primary conflict while also leaving threads to be explored for a very long time.

Adam Kubert’s art is simply fantastic. His work on this series has bumped him to being in my ‘top 3 favourite artists’ list and with good reason: this guy can pencil the hell out of a comic book. There are some emotional points for characters in this book and Kubert’s art conveys those feelings extremely well. The layouts and structure of the panels are visually engaging throughout the book and his art provides a weight to this story that is worthy of the script. I think we could safely call Kubert the ‘event-slayer’ from now on and I can’t wait to see what he’s got in the pipeline.

Avengers Vs. X-Men has been a polarizing series for many, and perhaps expectations for what it could do were impossibly high. What the 5 writers and 3 artists have given readers is an explosive denouement for years of Marvel storylines. The Phoenix has once again provided a stage for rebirth, and it will be very interesting to see where Marvel goes from here. I know after reading the final pages of this issue, I’m more interested in what is coming next than I have been in months.