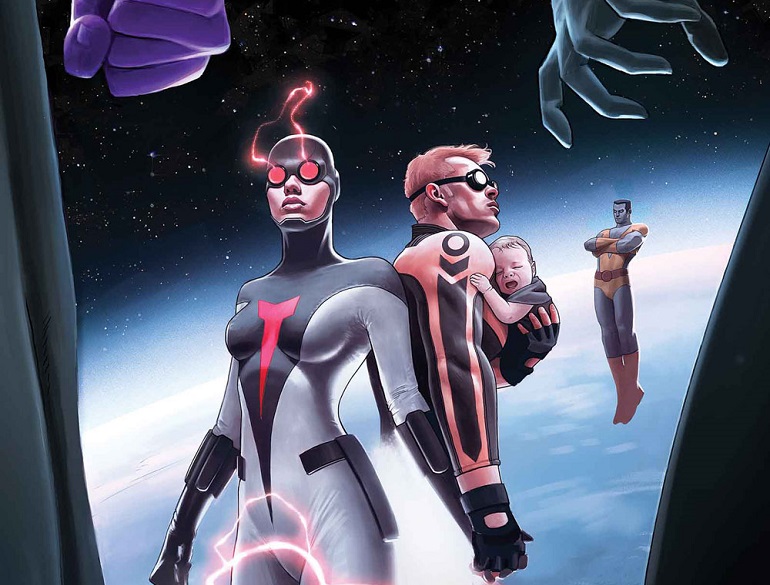 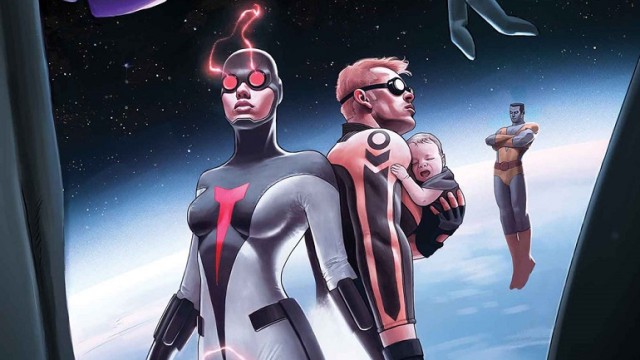 This is a story that takes place in the present. The key here is that the series has gone to the past and jumped ahead to the future. Now, in the one-shot pacing of this book Frank Barbiere and Marco Checchetto take a breath to explain how Izzy, known as Smasher, and Sam, known as Cannonball ended up on another planet and had a child. At its core, it’s a relatively simple idea. However, Barbiere laces key details throughout the story that help to make the quick transition from Earth to space feel very organic.

During the adventure, Cyclops’ space pirate father is roped into the adventure to help Sam chase Izzy down. It’s a fun little side beat that help provide needed comic relief throughout heavily romanticized story.

Marco Cheechetto’s art takes on a soft approach throughout the whole book. This means it can be hit or miss in some places. Some of the more romantic interludes between Izzy and Sam felt a little awkwardly posed. This might have been an attempt to make it more true to real life, but you want to reach into the pages and readjust their heads or tell them to look in different places while having an intimate moment. Other times, his art gives you a rush of adrenaline with lots of explosions, unique expressions on character faces, and well thought-out paneling. How you feel about the delivery really depends upon where your vested interests lie.

A word of caution: Fans who have been reading the Time Runs Out lead up stories through Avengers and New Avengers, as well as Avengers World, will have no problem placing where this story takes place. New readers, this is a fascinating place to jump on. There are several reasons for this.

One is the recap pages which show what happened in just a few panels what relevantly happened leading up to the story and what the rest of the audience knows happened after this story is over. There is no hiding this is a pause/break issue, which gives the characters a chance to breathe and explain how they ended up on another planet and with a baby.

Because of this dynamic, new readers are given a chance to catch on to the series. I am the biggest non-fan of the New Mutant characters. Cannonball has never been a favorite of mine. I normally thought of them as too young, too green, and too D-list. However, Barbiere weaves such a natural feeling story in the mask of action and adventure that you cannot help but feel for the characters, even if you know so little of them.

Secondly, there is the manner in which Izzy’s pregnancy is handled. Mostly, it’s not. Barbiere and Checchetto show Izzy as someone who is still a superhero who will go into space, smash up the bad guys, and save the day. She’s not afraid of explosions or getting hurt. She’s one of the most realistic pregnant women I’ve seen in comics in a long time.

Despite what television and melodramatic books portray, many pregnant women are still active: from yoga and aerobics, to horseback riding (up until later months) and karate as well as possible lugging around heavy camera equipment while out reporting on a story (yeah, I was guilty of that last one up until my last trimester and I was told not to by my boss… I did it anyway.).  Yes, women want to protect their children and bodies while pregnant. However, that doesn’t mean they must lock themselves away for nine months! (Of course in Izzy’s super-gestation case, it’s much shorter… yay super babies!)

There will be plenty of readers without the patience to hop aboard a new superhero series, especially one so deep into a crossover. However, cursory fans of the Marvel Universe or people looking for a different portrayal of super-couples in love should immediately pick up this issue. It provides and emotional buy-in and character development that can be hard to find in a single background story. No additional information is needed about this group of Avengers missions before this issue. You know they have been busy and are getting a moment to deal with life. Add onto that plenty of action and explosions, as well as some saucy space pirates, and you’ve got a recipe for fun and love.

Want to learn more about Avengers World? Check out the interview with writer Frank Barbiere on The Hangout.