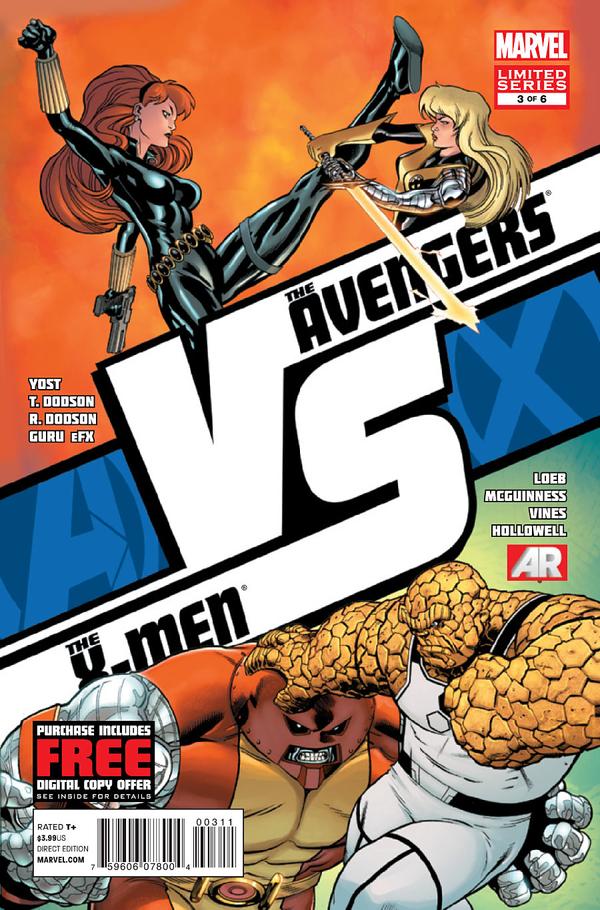 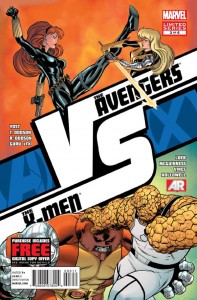 The battle royale book continues, chronicling only the fights that are being left off panel in Avengers Vs. X-Men. First thing’s first: this book is a cheesefest, and wears it on its sleeve. This book is about 1 Avenger and 1 X-Man beating the Hell out of each other like superhero UFC fighters. Now, we can move on.

“Match 1” features two bruisers, Colossus & Thing, who we have already seen go toe to toe with other opponents several times in AVX: VS and the many tie-ins to the series. If you noted a tone in that last sentence, you would be right. Colossus and the Red Hulk had a huge brawl in Uncanny X-Men, Thing and Namor smacked each other around in Uncanny AND AVX: VS – why do we need to see this? Loeb doesn’t write the story poorly, by any means, and Thing is always entertaining to read with all the banter, but c’mon – let’s spice this up a bit! From start to finish I couldn’t help but feel ‘been there, done that, fifty times’ through this whole section. McGuinness pencils it well, but no part of this half of the book stands out enough to warrant brain space remembering it. Other than a couple of great splash images, I’ll never look at this half again.

The second match features Black Widow and Magik facing off, and I applaud the use of two lesser-used characters, and kick-ass females, no less. These two do not have power sets that match up at all, and Christopher Yost does a great job of making that blatantly apparent. He writes both characters strengths and weaknesses well and I found this half of the book to be the polar opposite of the first – it was quite entertaining. Those of you who have read some of my Defenders reviews will remember that I adore Terry Dodson’s art. This issue is no different than the typical high quality associated with the Dodson name is on full display. This matchup had the spirit of the first issue of this series in that it was a blend of fun, action, a bizarre matchup, and some great focus on a battle that has not been tired out at all.

This is one hard issue to put a number to, seeing as it is a combination of two polar opposites, but here we go….