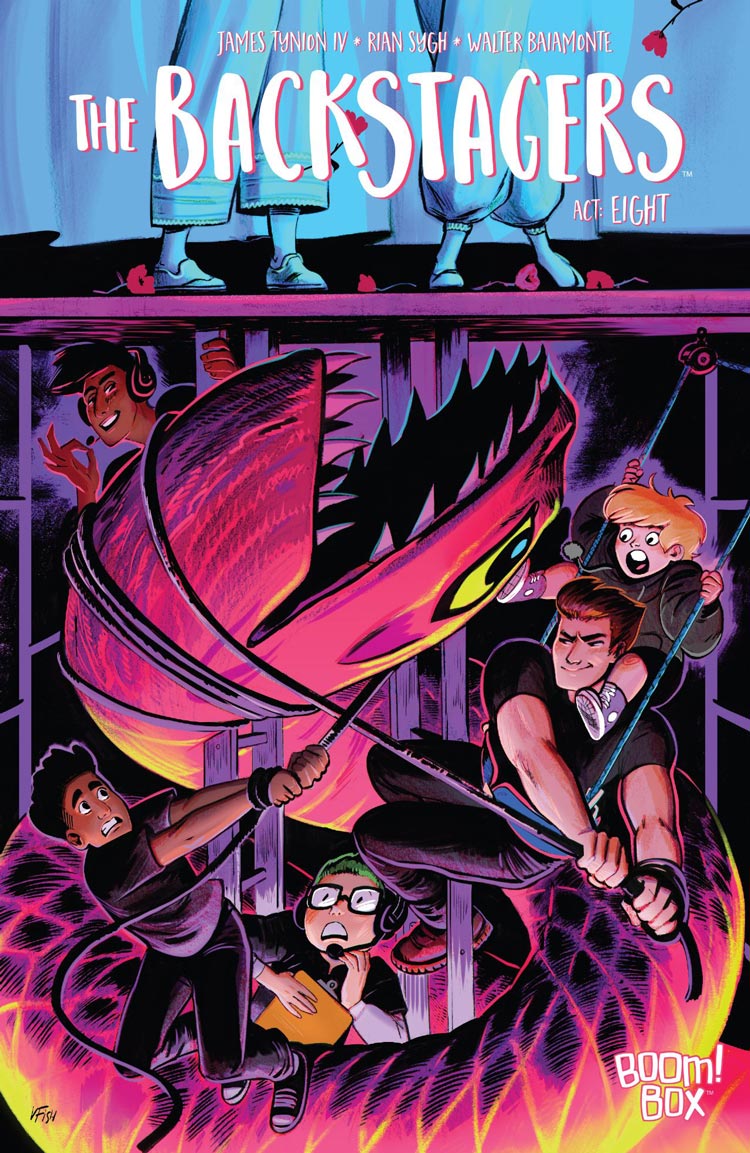 The team is back together again! Assembling for one last show, the crew joins together to defeat their final foe in this last act of Backstagers!

Tynion has created a world that I wish he had more issues to delve into. The mysterious land of the backstage feels somewhere in between Narnia and House of Leaves and has a lot more yet to be explored. All the characters are wonderful and the series in general has been consistently hilarious.

While the comic, for the most part, is a lighthearted and fun romp into a mysterious world, much like Lumberjanes, this issue delves into the darker past of the backstage, and I appreciate that. However, a lot of perfect and awesome things happen as Tynion ties up as many story threads as he can and I loved every second of it, especially the football team metaphor scene. Putting the names of the people on the creative team on the player’s jerseys? Nice touch!

Sygh’s artwork is wonderful. No one’s ever just standing around. They’re moving their arms, they’re walking, they’re adding some sort of action to the scene. The wonders of the backstage are both goofy and menacing, bringing and air of ominousness and unpredictability to every scene. The added touches to the background, like little hearts or bubbles, are great as well.

Baiamonte’s coloring adds depth to the comic. The drama comes from the colors. The darkness surrounding Tommy, the bright shades of pink overflowing love and heartwarming scenes, the sepia tones of the past—they make scenes.

Backstagers is an important comic. Not just because it’s a fantastic comic that I love, but because it’s a comic filled with great representation of a plethora of different peoples who aren’t explicitly called out, but are there and are not defined by their difference. It’s a wonderful story about friendship, theater, and the magic behind the scenes. It’s imaginative and fresh and I wish that there was more to the story than just these eight issues.

While this is the conclusion, I hope there’s more in store some day, but as is, it’s a well-written piece with a satisfying conclusion. Read Backstagers.