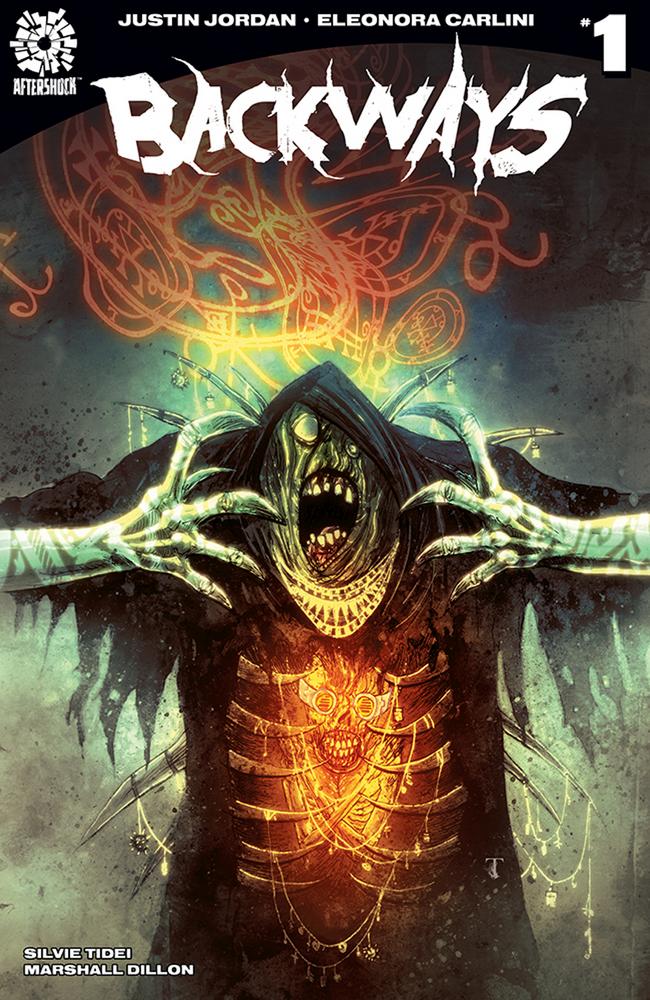 As kids and even into adulthood we dream about the hidden places. They are comprised of worlds that exist just behind or to one side of our own. These worlds give us a repose to escape from our mundane lives. Backways #1 is a doorway back into those fantasies, though, maybe not quite like we remember them. This first issue quickly entices the reader into the rabbit hole of another world hidden within our own.

Backways #1 is an excellent start to what could be a fascinating portal type adventure. Justin Jordan has given life to a story that so many of us have imagined as kids. This of course is an idea that has been used many times but Jordan’s story gives us a great contemporary version of it . He gets us into the action very quickly and introduces some very fantastic looking characters. The story starts off running and immediately presents the mystery as a hook to the reader. The young characters he has created for this story are strikingly unique from each other and all display headstrong characteristics. He uses some of the dialogue to hint at a much bigger world in the Backways as the final page of the book starts to introduces us to.  The voice of the characters should be familiar to the a younger generation of readers especially that of Coyote Bones. It almost doesn’t fit her look but she does seem to be a younger character so it works just fine. It is a refreshing change of pace from the usual type of wiser sounding mystical creatures that usually appear in these types of stories. The writing is fun and quick which takes the reader through the story almost before you realize it has started. There is one instance, though, that makes a leap in the main character’s abilities that wasn’t introduced before. It takes the reader out of the story but not so much to ruin the fun. Jordan’s magical characters and world leaves you ready to dive in and learn more about them.

The artwork in Backways is a collection of lovely visuals but Eleonora Carlini truly excels in the character designs of the inhabitants of the Backways. The real world looks good with attention paid to the details of the backgrounds and character costumes. As the reader is introduced to the fantastical side of the story, though, the art really begins to shine. The design of the beings that the main character Anna encounters are exciting and fulfilling to an eye in love with all things fantastical. Carlini’s panel layout is nicely done and gives the book an almost three dimensional feel to as characters and word balloons seem to pop off the page. Silvie Tidei has done an excellent job on the colors in this issue. She especially excels at rendering the glow of lights on objects giving each scene a great depth to them. Comic book backgrounds a lot of time end up looking flat but Tidei’s use of shadows with the light makes Backways backgrounds come alive. It brings warmth to what could be cold panels and adds to the magical feel of the story. Marshall Dillon’s lettering is on point and definitely adds to the experience of the story as it differentiates between the voices of the characters.

Overall Backways is a promising new title that should definitely be read this week. There is so much introduced in this first issue that if fulfilled should be an amazing story. Just the artwork alone injects alot of cool eye candy even if the story wasn’t as promising as it is. It’s a winning combination that leaves you ready to explore the Backways.