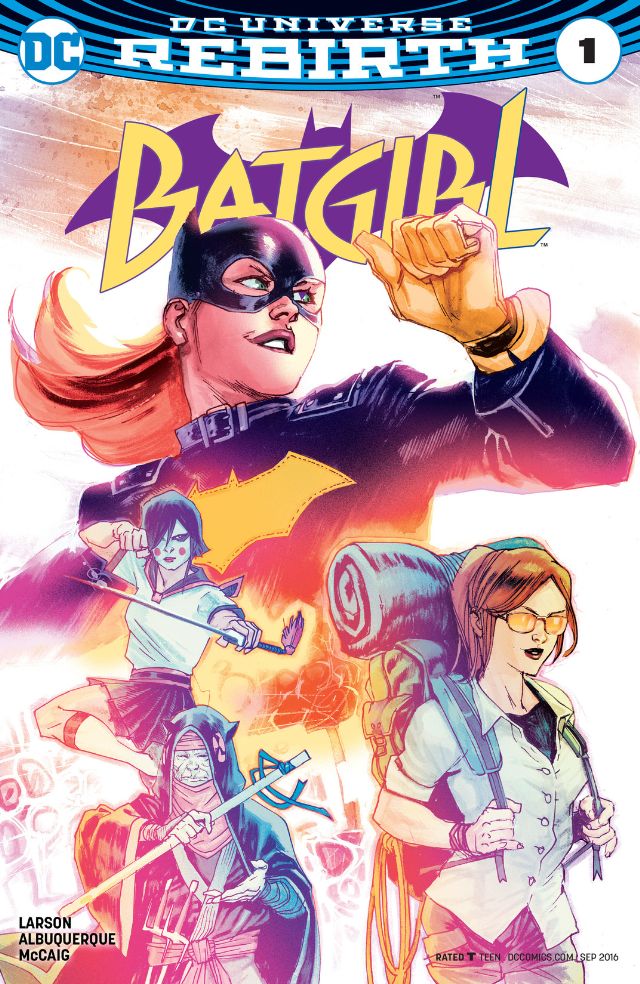 The Batgirl of Burnside has hit the road — to Okinawa, to be precise — to clear her head, see some sights, and maybe learn a thing or two along the way. Who could have predicted that it would be from the Batgirl of Japan, who is now over 100 years old and still kicking ass! Whaaa?

This last week has been pretty shitty for this Batgirl fan. From a sincerely lackluster reunion of the Birds of Prey in her other self-titled book to an even-more-obscene-than-expected portrayal in The Killing Joke animated feature, Barbara Gordon has had a rough seven days or so.

Fortunately, that all ends here.

Because Batgirl #1 from the team of Larson, Albuquerque, and McCaig is the real deal. This is the Barbara I (briefly) thought I might just have to live without.

Picking up thematically and artistically from the previous run by Stewart, Fletcher, and Tarr, there seems to be a pretty sound rationale for hitting the ground running with a new #1 without having that pesky Rebirth special out first, like so many other titles. Namely, there’s nothing that needs rebirthing with Batgirl. She’s already perfectly on track in tone, in characterization, and in visual depiction.

But what the creative team does here, quite naturally, is propel the lead character into a new environment for at least a story arc, so we (and new readers jumping on) can get to know Barbara all over again. And despite some initial concern on my part about the trope of “Western girl traveling to the mystic East to learn some new moves,” that doesn’t seem to be the direction Hope Larson is taking Barbara at all here. If anything, what we get is simply an educated young woman wanting to see more of the world (like so many other post-college grads) and not looking to appropriate, so much as simply witness and experience.

To wit, Babs speaks Japanese throughout the issue, and seems much more open and respectful to the culture she’s visiting than her hostel roommate and old friend, Kai. And the physical study she seems to be leaning into by the end of the issue isn’t some ancient art of lost masters, but the very modern Mixed Martial Arts. These touches, while minor, deflect the feel that Barbara wants to bop in and just pillage secrets that aren’t hers to master. Looking for clear headspace? Sure. Wanting to be the ronin to beat all? Not so much.

While Babs’ dialogue softens so much of her intentions (and serves as a great reminder of the unseen parts of her life waiting back in Burnside — her corporation and best friend Frankie), it’s really the word balloon monologues that give us the best insight into Babs’ intentions and current state of mind. She’s a bit bubbly, yet still whip smart and conscientious, particularly as a fighter.

And that’s where Larson’s pacing and Albuquerque’s dramatic action overlap to make the Batgirl we’ve come to know and love shine through. In and out of costume, Babs is depicted in stunning detail, with more smiles per page than I think we saw in all 20 pages of last week’s Birds of Prey title. The artist gives us a caped crusader who’s light on her feet, agile-feeling, and moves dynamically across panels in combat. Incorporating what looks a little like speed lines right into Batgirl’s body as she moves, we get a real sense of the movement with some really simple inking.

But the real joy is Albuquerque’s depiction of Babs’ eidetic memory in action, a key part of Tarr’s work on the last run, continued here in slightly more graphical style. Whereas Tarr’s depiction of Barbara’s memory was more of a backwards pace through scene and space, Albuquerque uses symbology — directional arrows and impact points — to show movement forward through time and space. It’s an interesting difference, and one that really works in an issue that uses raw color and layout to demonstrate environment.

McCaig maintains the sort-of day-glo quality of Batgirl’s world, imbuing characters with dox matrix style halos and utilizing color to shift states of mind from panel to panel. The focus rests soundly on the bodies and projectiles in motion, and everything McCaig lays down is in service of making the players on the page pop.

All in all, if you fell in love with the Batgirl of Burnside, you will find your new home in the pages Hope Larson, Rafael Albuquerque, and Dave McCaig lay out. Batgirl #1 is exactly the feel I was hoping for moving forward, and I’m beyond excited to see where the next issue takes our heroine. DC made the right call this time out.