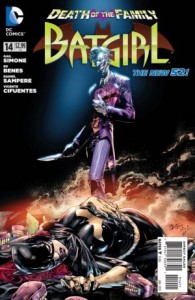 Crossover storylines often have the tendency to get a bit stretched. (Does it really make sense to have Cyclops fighting Thanos in Infinity Gauntlet? Did we really need to have a Batman tie-in title during Blackest Night?) With plans to encompass Batman, Detective Comics, Batman and Robin, Nightwing, Catwoman, Red Hood and the Outlaws, Teen Titans, and Suicide Squad, Death of the Family could well fall into the same trap, no matter how good the flagship Batman title is right now.

The one title I’m not worried about going off the rails, however, is Batgirl. Part of this is because Gail Simone is every bit as good at going dark as anyone writing comics today,1 but it’s also worth recognizing that as much time as Simone has spent writing Birds of Prey before the New 52, and Batgirl since, no one else has as much of a handle on what makes Barbara Gordon tick as she does.

Even though we still haven’t found out exactly how Babs regained the use of her legs, Simone has made the Killing Joke a central part of the Batgirl story since issue #1. Another meeting with the Joker was inevitable, and so Death of the Family feels like the next logical step in the story that Simone was already telling.

And while the New 52 has a Barbara Gordon who is sound of body for the first time in years, Batgirl is a compelling title largely because Babs psychologically is a walking open wound. If Batman is a model of sublimation, repression, and control, Simone’s Batgirl is a case study in how strength and vulnerability can not only coexist, but reinforce each other. It’s not always easy to read as Barbara relives the worst moment of her life again and again, never more than when the Joker finally sends clown-faced thugs to her apartment, but every time Babs finds a new bit of strength you can feel her inner steel temper a little bit more.

Batgirl #14 is about surviving the past, but it’s also taking seriously the “family” implications of the current crossover. Every threat in this issue carries domestic undertones, from Barbara’s once estranged and now endangered mother, to a villain who demands that Barbara make him a sandwich before her home is invaded. I don’t want to give away the gruesome moment that ends the issue, but suffice it to say that it promises to change the Gordon family forever. (“Something borrowed” indeed!)

For all that, I’m a bit disappointed by Ed Benes’ and Daniel Sampere’s art this month. Two artists, two inkers, and two colorists make for a rushed and inconsistent package. (The Joker’s eyes actually change color from green to red between pages 22 and 26.) Hopefully everything will be back on schedule next month, because strong writing and strong characters deserve strong art.

Simone’s Batgirl is kicking ass (in her nightshirt no less). I’d almost worry for the Joker.

1. In fact, if you follow Simone — @GailSimone — and Batman writer Scott Snyder — @Ssnyder1835 — on Twitter it can sometimes feel like eavesdropping on a conversation between a pair of twins in an Edward Gorey drawing. Strangely sweet and even generous, but never entirely able to escape the sense that they know exactly where your soft spots are.