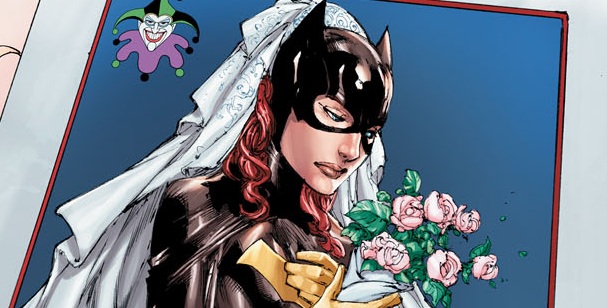 It’s not been a great week to be Batgirl.

After the baffling back channel announcement on Sunday that writer Gail Simone was removed from her post as the chief driver of Barbara Gordon’s fate (after nearly a decade on and off in the role), I was pretty sure that would be the worst thing to happen to Babs in the days that follow. I, of course, forgot one simple thing.

I giggle at Babs’ misfortune only because I know she’s strong enough to bear it and more. Even up against terrors as disgustingly gruesome (and simultaneously laughable) as those Simone is known for with her previous title Secret Six, Batgirl here manages to display her trademark intellectual honesty and personal fortitude in spades. Finally face-to-face with the Joker — the seeming force-of-nature that took her mobility and pride for a time — Batgirl has reached the moment she’s waited for. Every possible emotional reaction to the extremity of the situation is polished with subtle nuance and clean delivery through Babs’ personal monologue. Watching Simone take her through processing the scenario — from immobile fear to blinding anger, and all the way back to steely rationalism — is exhausting, but enjoyably so. The alternating conversations between the Joker and his therapist, between him and Batgirl, and the one happening inside Barbara’s own head, all create a crescendo effect for the reader that perfectly reflects the cacophony of the Joker’s own style and mindset.

This confrontation is pivotal, not just to the life of her mother, but also to Babs’ own ongoing recovery. We’ve seen over the course of more than a year a woman working hard to feel comfortable in her own skin, someone having to come to grips not with trauma, but the recovery from such. By the time we have reach the center of this issue, it becomes pretty obvious that road has been travelled. This is not the same woman who froze at gunpoint in issue 1, but a warrior renewed in self-confidence and the mastery of her own rage and fear.

Sampere does an excellent job of creating a carnival-esque environment, both in the skating rink and Batgirl’s ultimate destination — another great reflection of the Joker’s mind outwards onto the page. His Clown Prince of the past is nearly as terrifying as the man sans face of today, but only nearly. He genuinely makes the Joker’s new façade a creepy sight to behold, particularly as the steel grips back his lips into their new forced smile. Action is fluid and layouts reflect the fast-pace of the character’s movements, but some emotional quality in facial expressions is lacking by comparison to the original solicited artist Ed Benes’s work. That failing is a small one, and while it may keep me from giving this book a perfect score, it can’t keep me from reveling in every page as if it were someone’s last.

No, regrettably, that moment will come next issue and I, like Babs, will be devastated, terrified, angry and thrilled in a terrible, glorious whirlwind. But I’ll also be thankful for the journey in getting there.