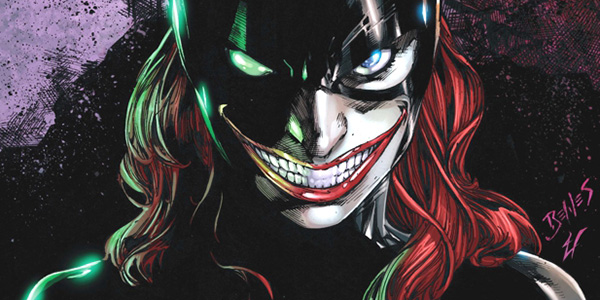 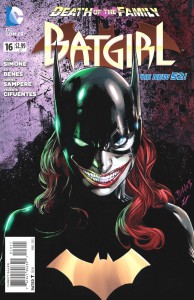 Somebody’s getting married… and Lord knows, I’m a sucker for a (Bat)girl in a wedding veil.

Issue 16 stands out in my mind as the “one after the beginning of the story ended” — the issue where we’re onto Barbara’s new journey, having now conquered the initial process of returning to the cape and cowl. Gone is a Batgirl unsure of herself, second-guessing her ability, or blanching at the thought of the madman who took her mobility four years prior. In her place is once again the Dominoed Daredoll (although I dare you to say that to her face without a gun or severed finger in your hand), but older, wiser, and far fiercer than in years gone by. Good thing too, because she’s facing a Joker who will stop at nothing to get what he wants in the most gruesome way possible, simply for the fun and abstract torture of it. And while Babs is at her most steely, facing a seemingly impossible situation, Mr. J is quite literally at his most terribly, disgustingly amusing.

Simone captures the Joker not simply as a madman in this installment of Batgirl’s three issue tie-in to the overall “Death of the Family” event, but as someone truly entertaining for reader and in-universe participant alike. Sure, I’d be scared to death if a guy with no face waved around a chainsaw in front of me in a church, but I have to believe I’d still appreciate his witty banter about it — like a cross between Texas Chainsaw Massacre and The Rocky Horror Picture Show. (How is that not a movie we all want to see/live?) But in all seriousness, the ongoing prattle, almost incessant quipping the Joker exhibits here is some of the tightest rendering of how his madness never exhausts, never tires, put to paper in recent memory. Simone has made full use of the opportunity afforded her by her paternal book, in a way no other tie-in or related crossover tale has managed to do. Batgirl feels as though it has stakes equal to Snyder’s Batman tale, running concurrently and not at all secondary to it. The story may, as readers can predict, dovetail into Batman #17 at its conclusion, but there’s no sense that what was accomplished here was in service to someone else’s vision. In fact, placing such a critical juncture for her main character amid the chaos of an event-style storyline couldn’t have been better planned.

The art styles of Ed Benes and Daniel Sampere, each taking one half of the issue’s pencils, blend far better than I could have predicted. Benes’ Joker is a far more disheveled figure whose face stretches and slides taut over his forced grimace with a dynamism that makes up for the relative static action of the first ten pages. So when Sampere and inker Cifuentes take over the illustration, they can do what they do best — the ballet of a fight scene, gloriously dancing from panel to panel in bloody detail. As Barbara’s gauntlet smashes apart a goon’s mask or she attempts to hold back an oncoming spinning blade, you feel the impact or pressure as clearly as it were yourself in combat. Of note too is Benes’ gorgeously textured, almost ethereal interlude at the start of the issue — flashing back to immediately after the Joker’s first attack on Barbara — a representation of anger and violence that’s merely a shadow to the act that follows.

In the end, Simone and her collaborators have devised a story that closed one chapter and opened another, all amid a maddening cacophony that ends up more pleasurable and harmonious than could have been predicted. All the more reason to celebrate the writer’s continued presence on a title she’s clearly put her heart and soul into developing into this great song of triumph and terror. Things may look dire upon the last page of this issue (Maybe I should have mentioned Saw earlier, as well.), but I have more reason than ever to come back to this book and its gut-wrenching delights month after month.