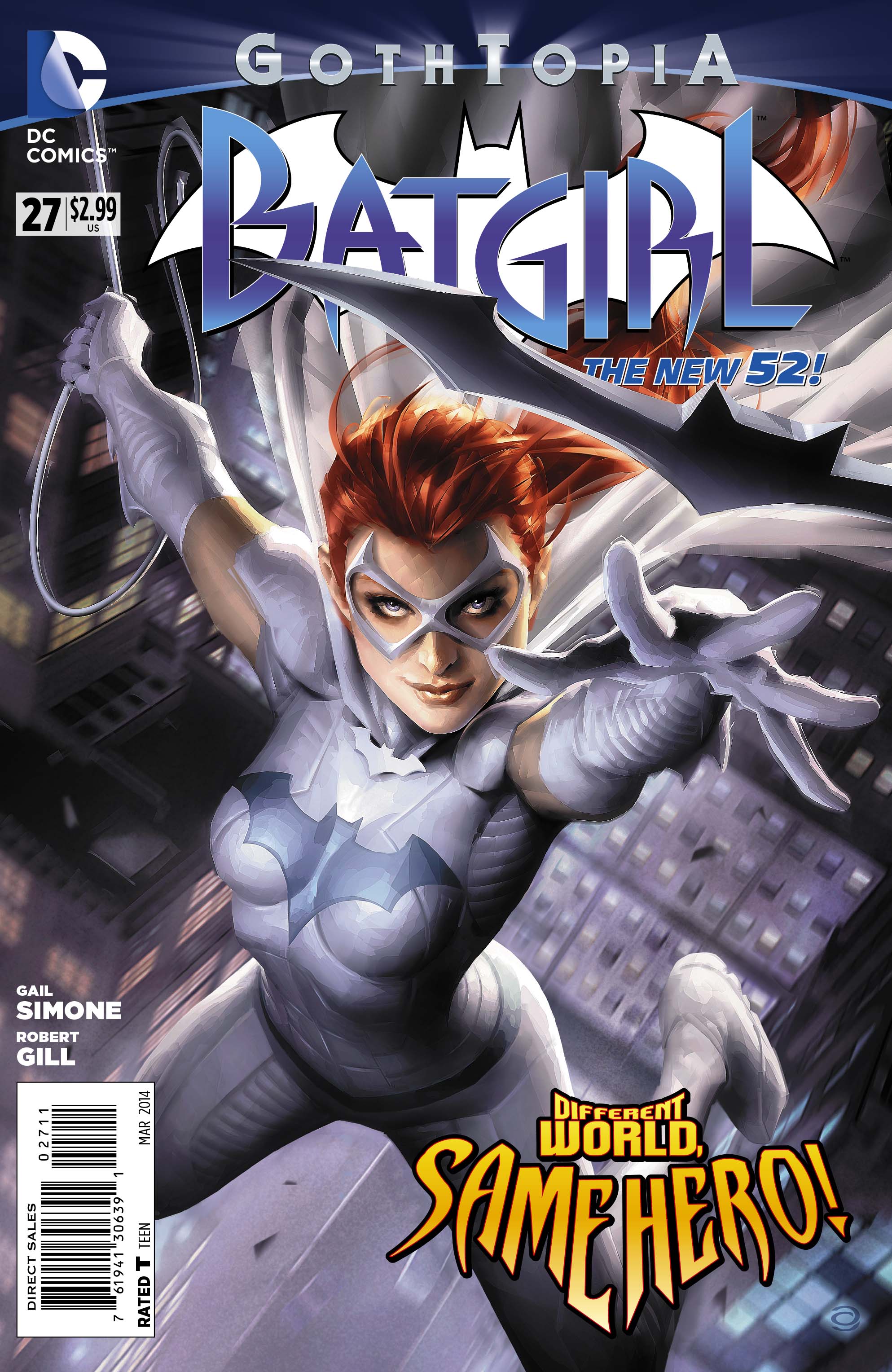 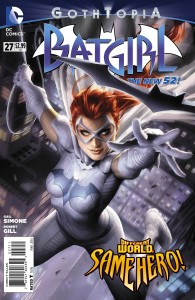 Comicosity has no shortage of Bat-fans, and there are two writers who just can’t help but love the dominoed daredoll enough to fight over who gets to review her book. In a fit of collaborative energy, Senior Editor Matt Santori and The Hangout host Jessica Boyd decided to share the honor this month for Batgirl’s “Gothtopia” tie-in. What follows is their conversation.

Matt Santori: Can we just talk about the names? Daybreak is a cute play on Knightfall, but Bluebelle? Where did that come from? It’s super cute, though. I thought her costume was a beautiful play on her usual one — so much so I kind of wish she could keep wearing it! Robert Gill, who is also handling the upcoming Batgirl Annual, did an incredible job. It felt fresh and original, but not so far away from her New 52 structured look.

Jessica Boyd: The costume itself was beautiful. It makes me wish Barbara carried daytime crimefighting gear with her. It was different than the doom and gloom of what has been seen so far.

The actual story was somewhat disturbing for me. The random violence — and the threat of violence against children — always puts me on edge. I had to stop and take a break before I could complete the issue, especially after such a fun beginning. The juxtaposition between the beginning and ending was startling. The Batgirl book has had a consistent cloud of gloom over it, since the start of the New 52. At first it was about her regaining her footing. Lately it has been the oppression of the maddening villains who cannot be reasoned with. This issue was interesting because, as you said, it continues the themes but also works on Barbara’s own doubts and knowledge that things are not really as they seem and her final realization about how she feels about that. Despite the hint of despair, overall, it did feel like a happier and more uplifting issue. You couldn’t help but feel good that Barbara felt good for once.

MSG: And that’s why it really resonated for me as an issue of “Batgirl,” not just another Batgirl story, if that makes any sense. I felt it maintained the themes that have surfaced throughout the entire run, but still played in the Gothtopia sandbox under its own rules. The leap into the sunny air Bluebelle makes toward the beginning really brings me back to that first full page scene in Batgirl #1 that still tugs at my heart, when Babs is flying through the air with a huge grin.

I don’t know that I would characterize the overall tone of the series as gloom so much as “trauma.” The book is so much about trauma, and this issue provided a really fascinating look at what Babs’ life would be like without it. It’s delightful, obviously, but still, it’s not quite right. And that is so true that it provided a really lovely breather amid some really dark stuff. The “murder” of her brother, the Joker’s return, and her own PTSD and survivor’s guilt have made the book a really challenging (in the best sense) title, but Babs, at heart, has a light inside her that is nice to see more clearly for once.

JB: As far as what is not quiet right, I feel like the relationship potential between her and Daybreak was wonderful. It set forth that had things been different that they could be the best of friends. Also, the fact that perhaps the real Knightfall hates Barbara so much because Batgirl represents what she should be but isn’t because of the trauma and murderous choices in her own life. This makes it very clear that she is the ultimate arch-nemesis to Batgirl. Batgirl has needed a worthy rival for her whole existence. 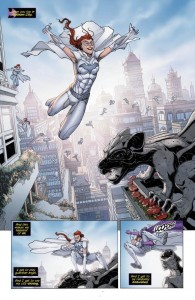 MSG: Daybreak was a welcome add. What could have been, I guess. And yes, it’s clear that Babs and Charise are not all that different — both smart, deeply driven young women. This really cements Knightfall as the “What if Batgirl was a sociopath?” candidate of the year.

It is such a difference to see all these characters in the daytime too. I know we’ve seen brief moments of Babs and Alysia shopping in daylight, but this was full tilt sun. A very different Gotham, clearly. And yet, even this Gotham has to create its own Joker. It makes me wonder what Angela Ramirez would have been like in normal Gotham…

JB: The key with Angela Ramirez is that she most likely would have been a balanced, although grieving, family member. One of MANY in the Gothem-verse who has lost family members to the horrors of this city. She would have coped with the loss.

MSG: This story, perhaps because it is a done-in-one, provided the set-up much more fluidly than Batwing had. In a way, I like that it felt like an old-school imaginary story, that we almost never get anymore, except in that lovely Brave and the Bold issue — which coincidentally also starred Barbara!

I do think this issue can be read independently of the main Gothtopia story (although I am thoroughly enjoying that as well), and it highlights something Simone has managed to do not once, not twice, but THREE times now — which is, jump into one of these All-Bat crossovers with a unique take that stands on its own. Her Night of the Owls issue was absolutely poetic, and featured the introduction of a great new character for the New 52 (Strix) and her “Death of the Family” issues expanded into the relationship between her and James Jr., so that it wasn’t until the end that you realized she turned the name of the crossover into something all her own — the death of the Gordon family dynamic.

JB: Simone definitely has the creativity and power to make sure that Batgirl is not only a team member within the Bat-family but has her own unique dynamic that makes her storyline powerful enough to stand alone and not need the other Batbooks to continue with what is occurring in her own life. Despite the number of Batman and Nightwing crossovers, if you have never picked up those books you are fully capable of following her story and not feel like you’ve missed anything that has been happening.

MSG: And Barbara deserves that. She’s not a sidekick. She’s an independent woman, who joined someone else’s crusade, but not without losing the sense that she’s her own person. I’ve always wondered too what it would be like if Barbara herself had a sidekick, and we kind of get that answer here. That’s it happened within a month of really seeing Batwoman and Hawkfire go to town as a new dynamic duo is nice happenstance.

The only thing artistically I thought was odd in the issue was Gill’s clear homage to the mask the lead character wears in Riley Rossmo’s Bedlam series. On the other hand, however, since that character is so obviously a riff on the Joker, I think it can be excused, or perhaps even chuckled at.

JB: I think the mask is what also triggered my sense of dread. The homage to Bedlam was extremely fitting given the topic matter. In fact, the mask is what made me have to stop for a second and regroup myself before coming back to finish the issue. The second she put that on, I knew where things were headed and I knew as a parent it was a hot button feeling for me.

There is no doubt that this issue provides a palate cleanser before diving back into Barbara’s problems that continue to build with her father, the injury to her boyfriend and life as a crime fighter.