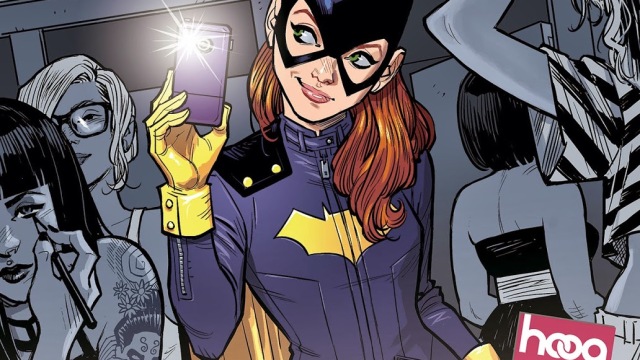 In planning to review this comic book, I anticipated having to include terms and conditions in fine print at the bottom. That’s how complicated my relationship with this comic book going in is, and how many disclosures I felt I needed to make to do it (and you) justice. And here they are:

1. I am an enormous Barbara Gordon fan, especially when she embodies the role of Batgirl.

2. I have absolutely adored Gail Simone’s run on the character, especially the most recent three years.

3. I am a life-long DC Comics fan, and tend to favor them when I believe they are taking chances and providing new jumping-on points.

4. Books like Ms. Marvel and Kevin Keller may currently rock my world, much to my ongoing surprise, but I am not normally drawn to conventionally “fun” titles.

All this leaves my bias… I’m not sure where. Am I more inclined to love a book like Batgirl #35? Less inclined? Does it all balance out?

And then I just decided to stop worrying about it and read the issue, fresh and in full.

And it’s pretty much amazing.

Batgirl #35 couldn’t be further on the comic spectrum from the issue that preceded it, as the title shifts full-tilt from some semblance of dark vengeance and overcoming of internal trauma to light adventure and facing off against external dilemmas. Stewart and Fletcher have set up a wholly new scenario for Babs that requires quite a mind-shift from the ongoing reader, but ultimately feels as deeply personal as what it’s leaving behind.

You really need to jump into Barbara’s new circumstances and attitude with both feet to get what Stewart and company are doing — and that’s not a criticism, but an invitation. Because one thing has become patently obvious about Barbara Gordon these past ten years: she is not one-note. Her mythology spans decades of iterations that each have their overwhelmingly positive aspects, but are as divergent in style as they are consistent in heart. And this comic begins just another chapter in that ongoing saga. Much the way Superman, Batman, or Wonder Woman can sustain many varieties of story, it’s clear that Barbara Gordon is of that character quality and flexibility as well.

And so, Stewart and Fletcher take full advantage, giving us a Babs who is being pelted from all sides with so-called normal life and taking it on the chin in the process. And yet, she doesn’t give up. The dude (I think girls are called dudes now.) is hung over, and so not in the mood, and she still tracks a thief across town on foot. Her gear destroyed, she gets out the sewing machine. That’s called moxy, and it may seem pedestrian, but it’s a microcosm of what this character is at her root: not perfect, but striving. Always striving.

There’s an incredible focus in this issue on Babs’ brains over braun — as the best Batgirl stories always have — as the writers take the opportunity of the heroine’s newly diminished resources to exhibit both her advanced computer skills (so Oracle-esque) and eidetic memory in action (by the way, I knew what “eidetic” meant as a ten year-old because of Barbara Gordon.). Making these skills, far beyond your average detective skillset, the centerpiece of the story leads me to believe we’re going to be seeing one of the smartest denizens of the DC Universe in action every single month. And I like that.

And so much of this is reliant on the fantastic breakdowns provided by Stewart and knock-out stunning finished art by Babs Tarr and Maris Wicks. The visual extrapolation of that eidetic memory is so well-done in the context of the story layout, and it really stands out as a representation of that skill I’ve never seen before in a comic. This is clearly a case of show, not just tell.

DC has really hit a major home run with recruiting Tarr to their team, as every page feels more fun and thoughtful (simultaneously) than the one before. Babs’ expressions and body language run the gamut from fierce to embarrassed to amused, rendered in a classic style that hovers somewhere between New Frontier-style 60s nostalgia and modern indie simplicity. The shapes aren’t overly detailed, but the inking is so sharp against the beautiful color palette Wicks employs. This book is a complete package art-wise, and it’s a miracle of nature that it’s, in fact, Tarr’s first published interior comic work.

Look, this isn’t the same Batgirl story you’ve been reading for three years. It isn’t the Batgirl story before that, or the Barbara Gordon from the late 70s either. But it is Barbara Gordon, and damn if it isn’t a great story and presentation to add to the bevy of awesome stories about this young lady. Brash, determined, fraught with challenges, uber-smart, dangerous in a battle, and not nearly ever perfect — this is our next big Batgirl story, and I think I’m going to enjoy every minute of it.