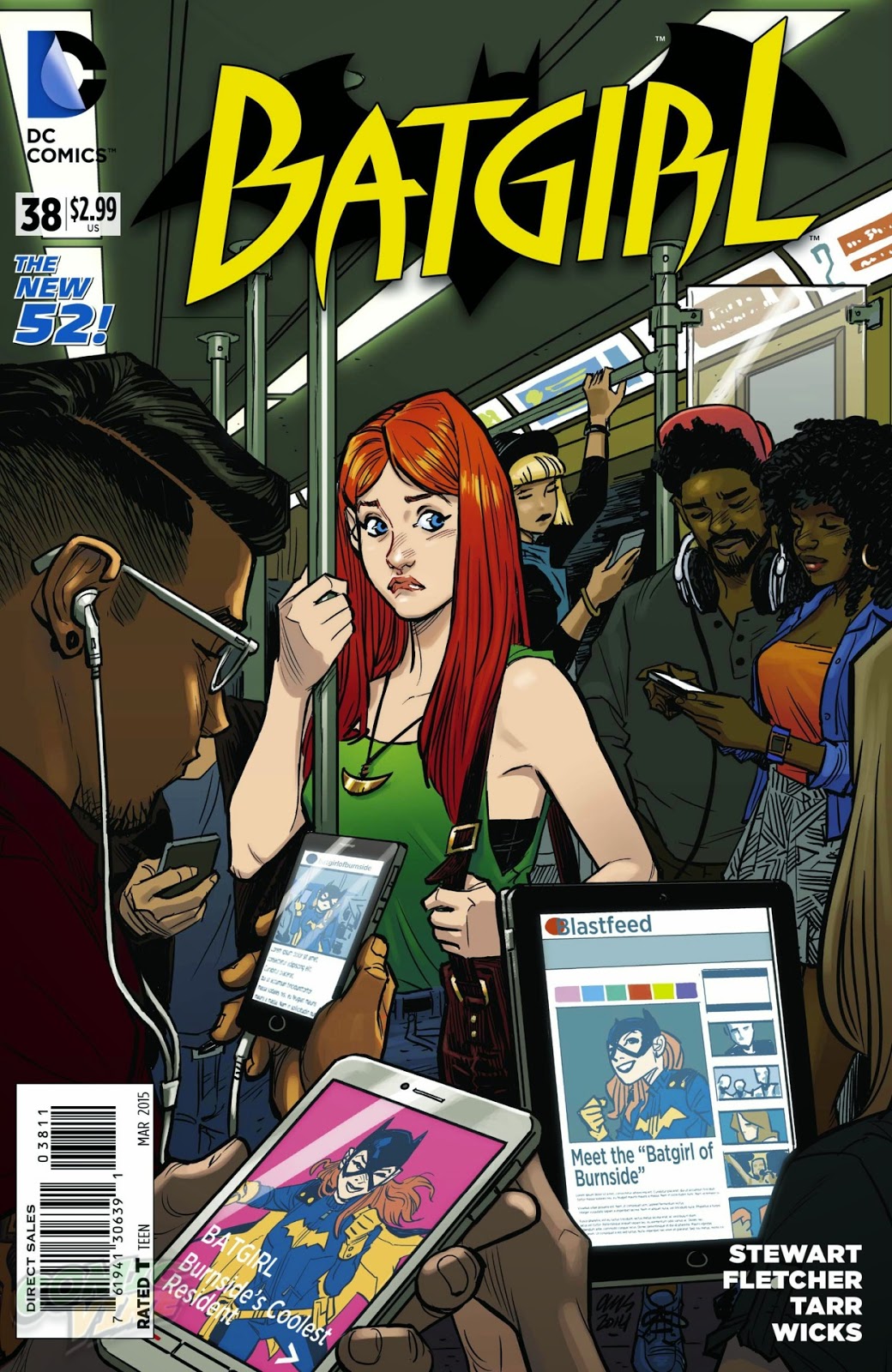 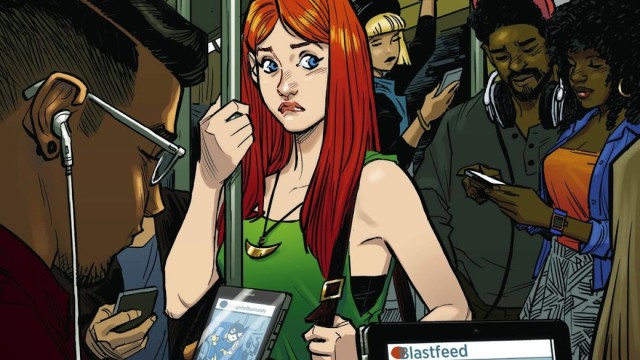 I’ll get right down to it: the pressure is on in Batgirl #38. I mean that as much for Barbara Gordon as I do for the book itself — the transphobic material in the previous issue definitely meant a possible loss of readers and increased the stakes for this latest installment. So many of us were on board with Batgirl right out of the gate, but after the stumble, there are several watching and waiting to see what happens next.

To start with, I don’t think it’s a spoiler to note that the transphobia of the last issue is not engaged with in any meaningful manner. Alysia Yeoh, Barbara’s transgender ex-roommate, is mentioned briefly by Dinah, but that’s about as far as we get. On the one hand, due to the nature of comic book writing and publishing, I imagine it would have been very difficult to rework a script to engage with a sensitive but important topic without throwing off whatever new plotline you already had in the works.

On the other, I have to say, I think it would have been worth it to do so. Though we’re only four issues in with this new creative team, I believe they’ve already gained enough social capital where fans would have accepted a delay in the release schedule in order to see the events of issue #37 narratively addressed — especially if they let fans know that this was why the delay was happening.

But let’s talk about what is in the issue rather than what I wish had been.

This month’s Batgirl is basically about three thematic questions:

As such, both my review and the success of the issue very much turn on whether you’re interested in any of these three questions. My guess is that, at the very least, most readers have thoughts on the first question — sheerly because this new Batgirl run has specifically traded on its incorporation of social media and its ability to speak directly to a readership who lives their lives on Twitter, Tinder, Tumblr, Instagram, and Facebook. It’s very cool that we’re seeing a comic not just use social media but also ask questions about it — and yet, once again, I wanted more.

Perhaps I spend too much time on the Internet (please see list of social media above for references), but I think this questions like question #1 have already been asked and answered. Google the phrase “social media narcissism,” and you’ll find a ton of hits, some going back as far as 2008. Though the discussion might be new to comic books, it’s one that’s been going on for a long time and nothing about the points made in this issue were particularly fresh.

As a 25-year-old social media user, it was incredibly hard for me to swallow a 21-year-old character making such tired (and generationally biased) arguments. I want the next steps — What does it mean to have a secret identity in a world where next to nothing is secret? How can a hero be empowered by these new forms of communication? What’s possible for 2015 Batgirl to do with access to social media that 1967-to-early 2000s Barbara couldn’t?

I have similar feelings about questions #2 and #3, and perhaps even some objections to the way in which question #2 seems to have been answered, both by characters in the issue and implicitly by the creators. Question #3 in particular is one that has been done to death. If you have read a superhero comic or watched a superhero film, chances are, you have seen this question addressed — often from the perspective of law enforcement, as is done in this issue.

And, similarly to my response to question #1, I’m not necessarily saying that all talk about the rightness or wrongness of vigilantism is a mere dead end. Gotham Central is an amazing example of how a series can take a fresh look at the downstream effects of vigilantism on a police department. There are stories and questions that are waiting to be told and asked about these things and the question “Is it really right to be a superhero?” isn’t enough for me anymore.

Still, there were some cool things happening in this issue at the level of plot. Of all the approaches made to Batgirl’s newfound social media presence, I think Dinah’s was my favorite. In general, it would have been great if there had been more of her, though that wasn’t quite possible for narrative reasons.

What little we do get is intriguing and certainly a little wish-fulfilling in terms of things I would want to see done with a early-to-mid-twenties Black Canary. And though I have some questions about how things work in the context of Barbara’s eidetic memory, I do find myself interested in the resolution of the cliffhanger we’re given, as well as an explanation for how characters know certain things.

On the art-side of things, Babs Tarr continues to kill in terms of character design. In a book about women — in a book, I think is arguably for women — I think the addition of an artist who makes sure to pay attention to the fashion choices and the characterization that entails continues to be one of the best aspects of this new creative team and this run. I’d love to live in the world of this comic, where everything and everyone is cute and trendy. Supposedly Cameron Stewart is having trouble (in the best way possible) getting her to draw characters that aren’t complete heartthrobs. I said it before, I’ll say it again: don’t stop, girl, you’re doing the Lord’s work.

There are also these tiny details that channel Japanese stylistics and call back to the halcyon days of Sailor Moon and — doodles of sweat to indicate that a character is nervous, or a tiny heart next to a gesture that marks affection. There are actually two panels on the second page that could easily have had Usagi and Rei in them, rather than Babs and Dinah, which is a great thing to connect with, especially considering the anticipated audience.

The integration of social media into the narrative of the comic itself also continues to be spectacular. The first page of the comic is covered in social media clips that are enough in and of themselves to let you know what Batgirl has been up to since the last issue. Similarly, later on in the story, images from this universe’s Instagram are used to show how Babs is able to track down a person of interest.

That sort of thing might have taken up precious pages or precious dialogue in order to explain, but the mere use of the photos were enough to let us know both where we were and how Batgirl knew to be there. What’s more, it makes superheroing just a little more accessible. If Batgirl can use social media to track down someone—why can’t we? (And, going back to the themes I was talking about earlier, what does that mean?)

Lastly, in case you thought that Babs Tarr was more style than substance, I suggest you check out the depiction of a chase in this issue. In the previous pages, the panel organization was pretty routine—straight lines, squares, and rectangles. However, once you hit the chase, it’s all angled panels, edges, lights-too-bright, and sound effects that break frame. It’s a structural choice that sets up the feel of a no-holds-barred chase incredibly well and really engages the reader in the tension of both the chase and the resulting stand-off. Everything about Babs’ art hits exactly the right notes at exactly the right time. She is absolutely the perfect choice for this book.

All in all, this comic continues to channel the spirit of being a twenty-something girl in this day and age, but I have to admit, that aspect is beginning to lose its shine. It got me in the door, certainly, with the book in my hands, but as I’ve said throughout this review — I do need more. It may be that this is just the beginning of Stewart and Fletcher answering these questions and that the best is yet to come, but for now, I’m underwhelmed. The aesthetic is great—if you’re an art person, this issue is worth it just for Babs Tarr’s work—and on a technical level, this was a solid issue.

Still, with a fresh design and a fresh outlook should also come fresh material. I will absolutely pick up the next issue and I’m willing to wait and see if the creative team has any more to say on these themes, but I do think this is, narratively, the weakest issue of the run thus far.