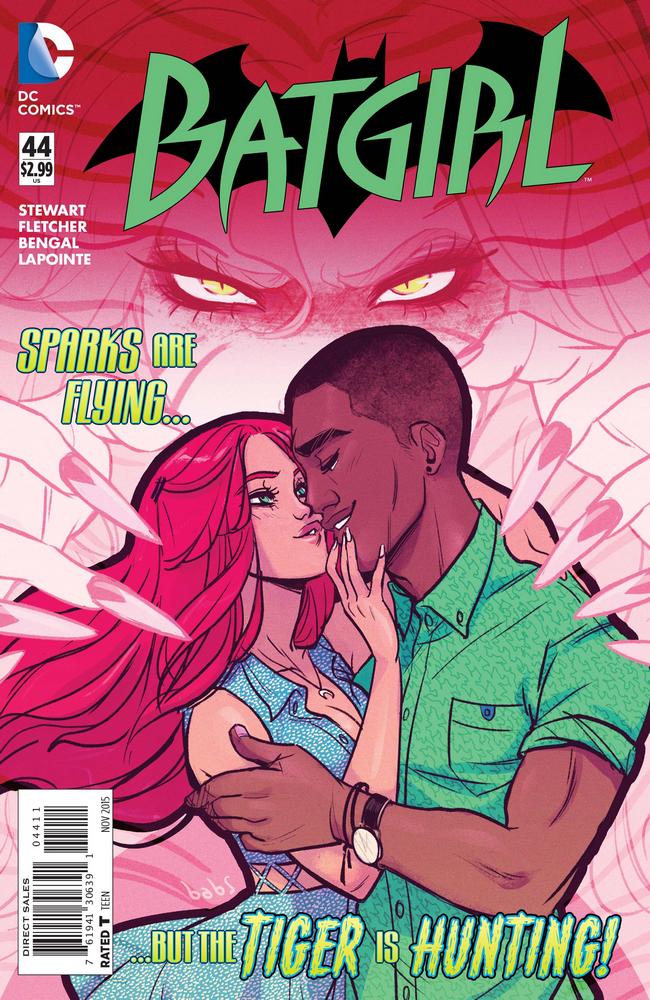 In an effort to rescue Jo, Alysia’s fiancée, Batgirl runs into Velvet Tiger, who has a surprising setback in store for our caped and cowled hero. Luke and Qadir help Babs recover and tie up some loose ends before she heads to rescue Jo. Babs has a brief throwdown with two real tigers before taking on their Velvet mama, leaving Babs to unfortunately be incapacitated by a tranquilizer dart as Alysia gets Jo to safety. Before Babs can completely fade out, she’s rescued by a surprising talking motorcycle. Luke and Babs end the issue with a kiss and a few questions before we pan to Frankie, the mastermind behind the talking bike who seems to have a lot in store for our Babs.

Batgirl #44 captures a lot of really great elements I love about Babs. She has always struck me as a woman who can adapt to any situation and who can gather a great crew of people to support her. Babs has a sense of honor and dedication that resonates through this issue, from her mission to rescue Jo to recommending her roommate Frankie for a job. She’s someone who not only uses her uncanny abilities to fight crime, but her love for her friends to make sure they’re cared for.

Cameron Stewart and Brenden Fletcher excel at writing Babs’ adventure in this issue. From start to finish, Batgirl 44 was a joy to read. This series captures something that many comics have needed for a long time, especially as a Bat title. We get a glimpse of Babs as a detective, vigilante, friend, and hero. Throughout her history she has been such a nuanced and driven character, and I think Stewart and Fletcher create a snapshot of the things that make Babs great in this issue.

Bengal and Serge LaPointe’s art is an amazing fit for her changes in the DCYou and does a great job of illustrating a new tone for Babs. Every panel wonderfully captures the action and movement of Babs’ world, as well as the emotions of her everyday life. Batgirl is someone who infuses her humanity and compassion into her life as a crime-fighter, and Bengal and LaPointe do her justice whether showcasing her feelings, from frustration to sprightly surprise.

This youthful Batgirl is amazing and capable. After having her image revamped, it’s great to see that this issue is another element of this new direction for her. She feels energetic and determined, capable of using her integrity to guide her decisions and actions. Babs is truly a shining star in the DC Universe and it’s so reassuring to see her in action. In a city like Gotham, beacons of light are vital in breaking up a thick dankness, and Babs is assuredly one of them.

The diverse characters in this issue blew me away. We have such a wide array of people who play an important role in Babs’ world and who live their own varied lives. Alysia playing a prominent role may be my favorite part of this issue because I feared she’d never return, particularly after Gail Simone left the series and especially considering the vast absence of trans characters. Yet, not only is she present, but she shares a love life with another woman. To be honest, I’m grateful that Alysia is more than just extant, but that she proves she has true gumption as a hero. Her presence was such a refreshing part of this issue, and I secretly hope she takes up her own cowl. Frankie, Luke, and Qadir add to this remarkable sense of representation, especially considering their role in science and technology. From the looks of this issue, Frankie may be shaping up to transform the representation of women of color in tech when it comes to comics.

Yet again we have a great example of how to write diverse women and characters. Babs is in true form and this issue reminds us of why she is so great. Her supporting cast point to how comics can seamlessly and organically create more diverse characters and should be an example of what it means to change the face of comics as we know them. Batgirl #44 was a great adventure and I’m excited to see Babs’ world expand as her story evolves.