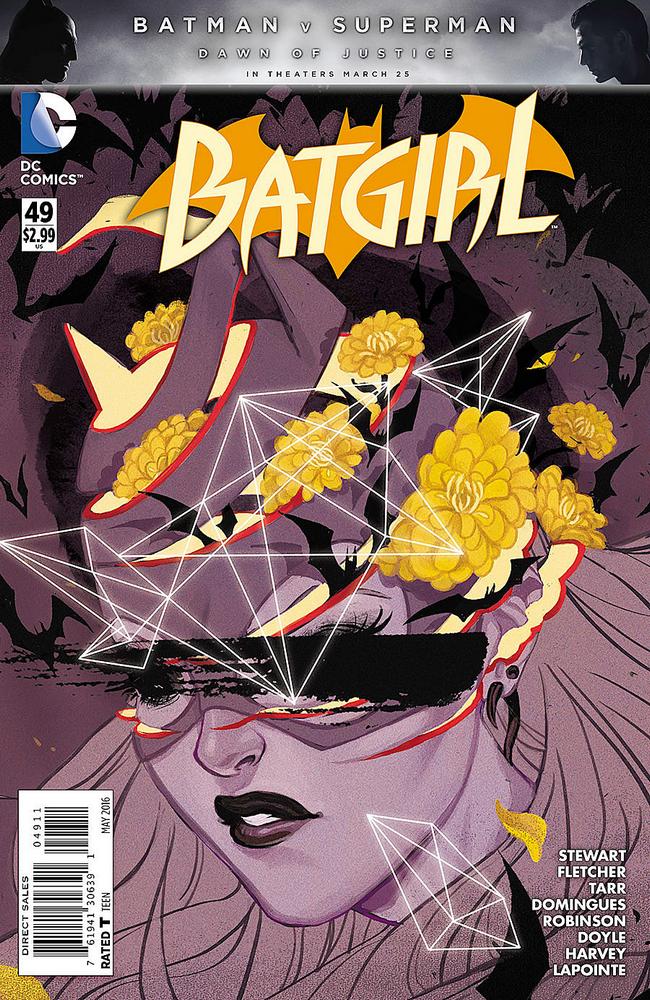 BEWARE. There is going to be no holding back on SPOILERS within.

Batgirl has fallen to the mental machinations of Fugue, and it’s up to Frankie to save her — by fighting alongside a copy of Barbara Gordon inside her own mind! But will she be able to fight off all of the fake memories the villain has implanted, including the most surprising one of all!

There’s a lot to unpack with Batgirl #49, including some obvious — and not so obvious — topics, but before we begin, there’s something to get out of the way. If the long list of creators on the cover of this issue (a phenomenon we’ve seen all too frequently on some DC Comics of late) put you off from the purchase: stop. Turn around. Go back to the store. And get this comic. Unlike the rather mish-mosh reality of Batgirl #47, this issue has some of the best blend of high quality artists, done with intention and conscious of producing an overall whole.

In short, this issue is gorgeous.

Regular series artist Babs Tarr provides bridging throughout, surrounding all of the moments fought inside Barbara’s mind with the outside world we’re all used to seeing in Burnside. And this isn’t a simple case of two pages at front and two at back, either. Tarr produces panels that cut across single pages, dividing artists and scenes, bringing us back to reality like coming up for air on a deep dive. 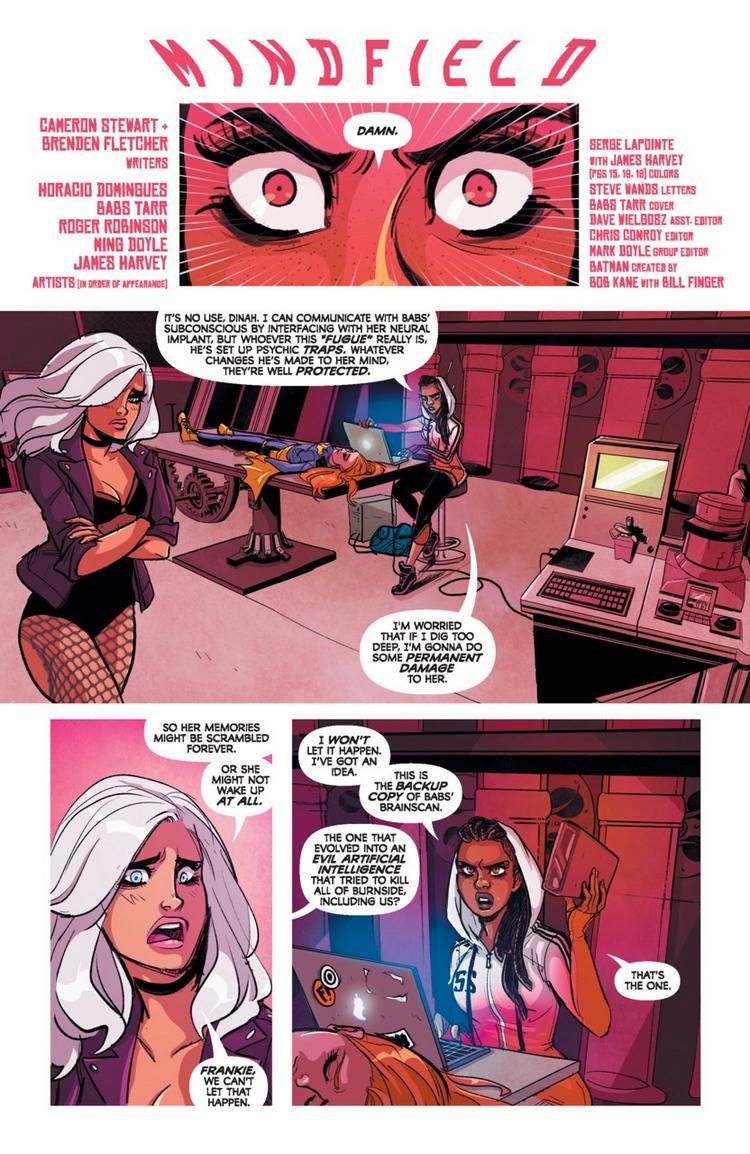 Every artist brings a little something special to the mix, with Serge Lapointe’s bright and fantastic colour palette uniting the vision, while still allowing scenes to feel tonally different. Doyle’s spreads are like a horror film, collapsing Fugue’s minions around Frankie and “Barbara” in a claustrophobic panic. Domingues’s scenes are like bright Mayberry (or Happy Harbor), like a callback to some suburban fantasy we always remember, but never actually existed. Robinson creates this Hitchcockian atmosphere that brings back the lovely New 52 body armor for a brief moment.

And James Harvey? Well, James Harvey produces the most important pages in the issue as a whole, like a labyrinth of madness that feels more like a dream than a memory, a sort of final inception of Barbara Gordon’s mind, and confrontation of the real and imaginary. And then puts the imaginary into the ground for good.

That Harvey was the perfect artist to illustrate this particular moment cannot be overstated. His work is few and far between in mainstream comics, having produced the most beautiful issue of We Are… Robin! (not ironically, also co-starring Batgirl), so any pages are a delight. But what Harvey is tasked with is something so poignant and rich, surreal and high stakes, that his pseudo-alien, hyper-CMYK style nails the moment on both a visual and meta level.

He gets to usher The Killing Joke out of continuity, at last.

It’s not a moment to take lightly, no matter what your opinion of THAT story (or more precisely, that portion of that story) is. It’s a big deal, reportedly a fulfillment of original writer Alan Moore’s own intentions, and certainly a fulfillment of the mission Cameron Stewart, Brenden Fletcher, Babs Tarr, and DC Comics Editorial have been on since the very first Burnside issue.

Long described by fans (including myself) as the ultimate albatross around Barbara Gordon’s neck, The Killing Joke has centered so much of a feminist icon’s history on sexual exploitation and assault. And that’s rape and exploitation not even from her own enemy, faced with her feet on the ground and fists in the air, but from her male mentor’s enemy with a gut blast that attempted to — and for a time succeeded in — neutering her agency. Whatever came after, it was in spite of this moment, not because of it. And finally that wrong has been corrected.

Included in a pastiche of false memories that include the funeral of Jim Gordon, a Robin-Batgirl team-up with timelines and costumes that don’t line up, an Alysia/Jo wedding ending in heartbreak and tears, a childhood with her best friend “Greg, ” a Batman revealed to the world by Two-Face, the moment of horror — that Joker smile and the raised six-shooter — disintegrates right before our eyes.

And it’s gone. It’s a curious thing to witness in the same month that Harley Quinn so pointedly removed the Joker from her present, to see Batgirl removing him so decisively from her past. Barbara certainly lost the use of her legs, but the torture at the hands of the Joker, much like Batman’s rejection of her ingenuity earlier in the issue, is a mere implanted memory. All of it designed to break her down by an enemy that couldn’t accept defeat at the hands of a woman more intelligent than himself. If Stewart, Fletcher, and Tarr have one legacy, this is that legacy.

DC has returned this Barbara Gordon’s dignity without losing sight of her bravery, determination, or will to overcome obstacles. They simply released her from the shackles that have never fully be removed, even 30 years later, as last year’s Batgirl #41 cover debacle showed.

And in the process of moving on, Stewart and Fletcher have added far more than subtracted. It’s clearly no accident that Frankie Charles, heir to the Oracle legacy, is centered in this issue’s adventure (in a sporty outfit designed by Tarr for the other artists to illustrate, by the way). Frankie is the perfect reminder of what Barbara has overcome, and how she did it — through true grit and heroism and brains. 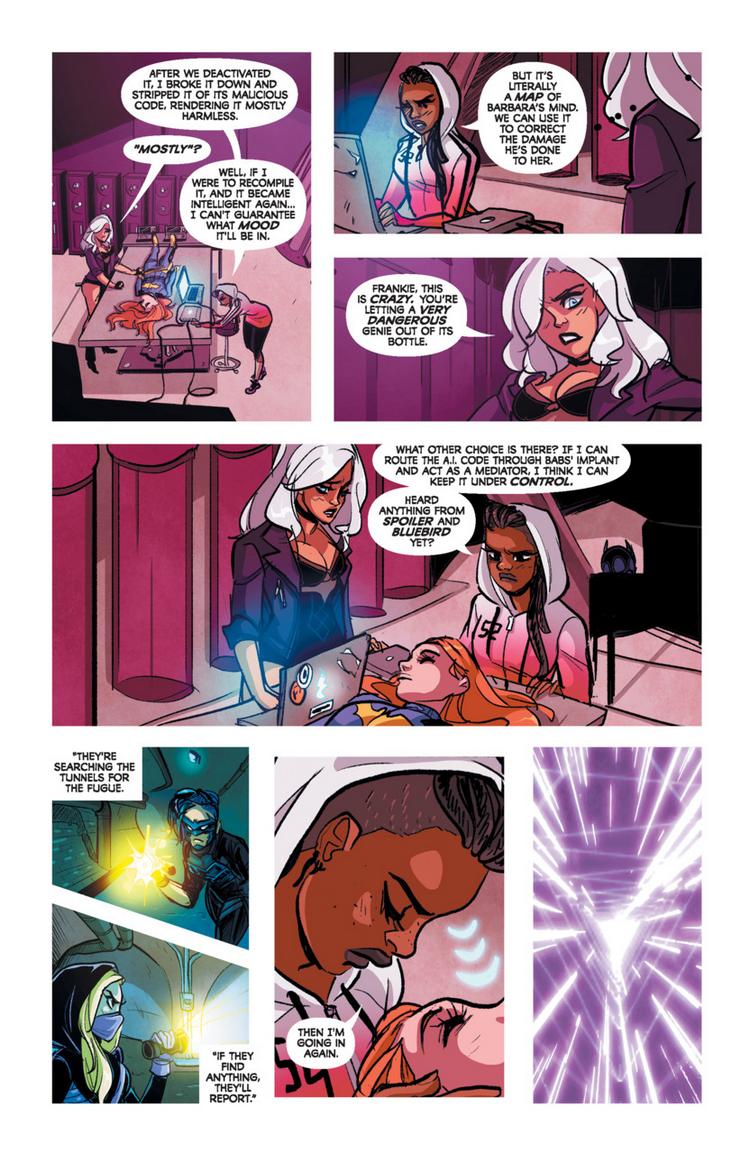 Having a character who lives with debilitating muscular dystrophy be able to enact extreme physical adventure by way of her own ingenuity is brilliant. And while we’ll ultimately be expecting to watch Frankie decline in the same way we experienced Barbara heal, having this moment as a highlight of what I hope are only her early years of heroism is truly special.

Frankie Charles is Oracle in every way that Barbara Gordon was. She is fierce and she is smart. And more than anything else, she wants to be a hero. And she shows, as Barbara always has — Batgirl or Oracle — that if you want to be a hero badly enough, nothing will stand in your way.

As a second legacy for the Burnside team, that’s pretty damn impressive as well.

As a single issue, Batgirl #49 has done more to respect the core of Barbara Gordon and her legacy than any issue in modern memory, and that’s saying a whole lot given all that Stewart, Fletcher, and Tarr — as well as Gail Simone, Ardian Syaf, Daniel Sampere, and Fernando Pasarin — have done since the relaunch of the New 52. Removing The Killing Joke from this Batgirl’s history is a gift of light and love to the character that, while long overdue and probably scary to all involved, is something I am deeply thankful for. And giving us a Batgirl with light in her eyes, surrounded by other kickass women who live up to her example — well, that’s just extraordinary.